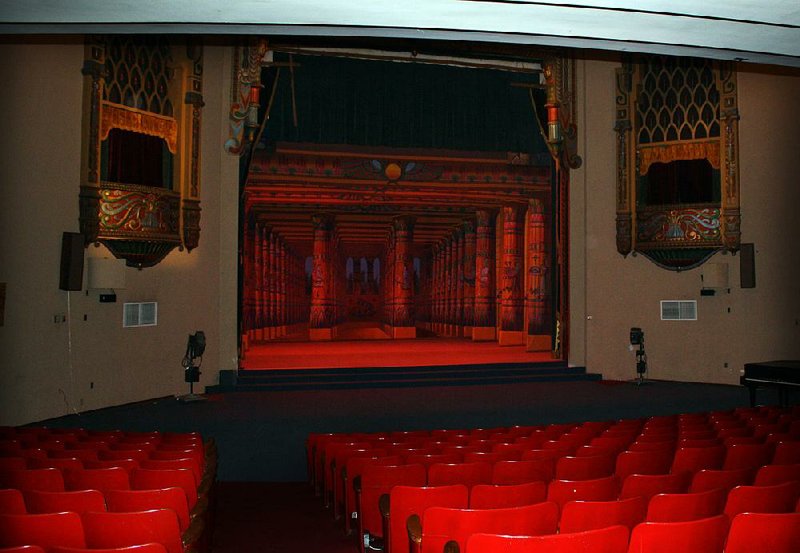 The former Fort Smith Masonic Temple, under renovation and renamed Temple Live, includes an ornate theater capable of seating up to 1,200 concert or moviegoers.

FORT SMITH -- Developers Lance Beaty of Rogers and Mike Brown of Tulsa are restoring the atmosphere of the roaring '20s to the former Masonic Temple -- a stone fortress that opened to the area's Freemasons more than a month before the stock market crash of 1929. 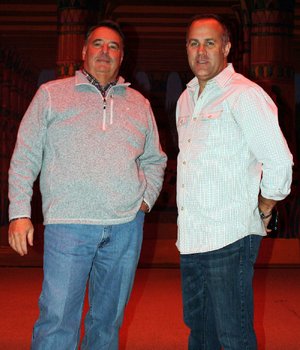 Photo by Cyd King
Developers Lance Beaty of Rogers and Mike Brown of Tulsa are shown in this photo. 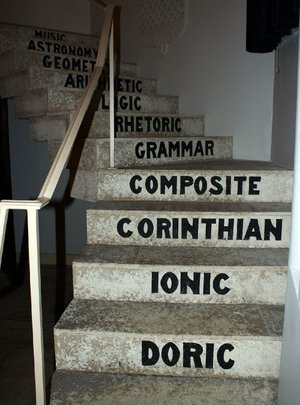 Photo by Cyd King
The 1929 Fort Smith Masonic Temple has a mezzanine and two stories above ground. There’s also a basement below with marble and granite staircases and many of the original fixtures. 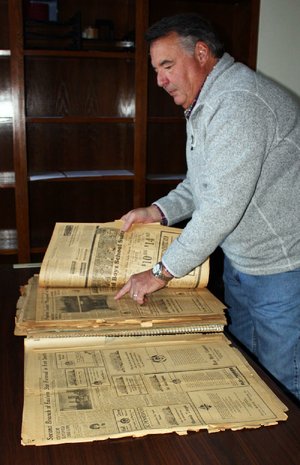 Photo by Cyd King
Lance Beaty, who bought the historic Fort Smith Masonic Temple under the name Temple Holdings LLC, found a bound book of what he believes to be every article written about the temple, which was built in 1929.

Court records show Beaty, manager of Temple Holdings LLC and president of the overarching Beaty Capital Group Inc., bought the 53,000-square-foot structure at 200 N. 11th St. from the Western Arkansas Scottish Rite Bodies last year for $325,000 -- $60,000 shy of the $385,000 it cost the masons to build, equip and furnish it. Beaty also bought some adjacent parcels for parking.

Beaty, who also was responsible for redeveloping Fort Smith's Phoenix Village Mall for office use and as an expo and event center, is expected to sink about $6 million in the place by the time it reopens as a multipurpose event center in October of next year. Brown is Beaty Capital's vice president for acquisition and development.

The building -- with a mezzanine and two stories above ground and a basement below -- features marble and granite staircases and many of the original fixtures, plus a main dining hall that can hold up to 400 tables and a fully functional 900-seat theater with rich, red velvet curtains and dozens of hand-painted theatrical backdrops that the Masons used for various performances. Additional seating can be added to accommodate up to 1,200 people.

The new owner sees it as a draw for national touring acts from a variety of musical genres and has renamed it Temple Live.

"I'll either be the visionary or the fool. It's a thin line," Beaty said recently, standing on the stage in the temple's auditorium.

The basement will house a swanky, members-only restaurant and bar to be called the Sphinx Club. A video on the templelive.com website portrays the club as having the opulent vibe of The Great Gatsby parties. The developers would not divulge membership prices.

He'll integrate another of his businesses, RSVP Event Rentals, into Temple Live for help hosting weddings, conferences, meetings, and other corporate and civic events.

Tim Allen, president and CEO of the Fort Smith Regional Chamber of Commerce, said there's not a venue like Temple Live anywhere in the region.

"This Sphinx Club is going to have a Chicago-type feel to it -- the white tablecloths and the art deco 1920s and '30s feel," Allen said. "It's a real 'cool factor' for downtown Fort Smith."

The temple was designed by Little Rock architect George Mann -- who designed the state Capitol -- in conjunction with Fort Smith architects J.J. Haralson and E.C. Nelson. It is one of the few buildings in Arkansas that portrays the Egyptian Revival styling, found mostly in the building's interior. The temple was added to the National Register of Historic Places in 1992.

The project is being funded by a $2.5 million construction loan taken out by Beaty Capital Group. The new owner said a significant portion of the project cost will be offset or mitigated by state and federal tax incentives for historic properties, and the project could not be accomplished without them, Beaty said. He expects to receive $1 million in federal historic tax credits and has been approved for $1 million from the Arkansas Tourism Sales Tax Credit program.

Crews took to the site in September. Over the next several months workers will modify and update the mechanical, electrical and plumbing systems and remodel the existing kitchen.

Three more service kitchens will be added to better accommodate the three expansive ballrooms. Other improvements include additional bathrooms, a new elevator, six dressing rooms and a remodeled backstage "green room" where performers dress and prepare for shows.

"We're looking at 52 events the first year, and we'll ramp up from there," Brown said.

Outside, the basement for the Sphinx Club is being unearthed and waterproofed and a better drainage system added. The exterior limestone will be washed with an alkaline cleaner to avoid scarring the limestone, and the steps and roof will be replaced.

These are all things that the Masons could not afford to do, based on a declining membership, said Dr. James Graham, equivalent to state president of Scottish Rite branch of the Masons. Graham is associate dean for medical education in the College of Medicine at the University of Arkansas for Medical Sciences in Little Rock.

Many of the nation's Masonic buildings -- such as Historic Scottish Rite Albert Pike Memorial Temple at 700 Scott St. in Little Rock -- were erected in the 1920s, Graham said. Unlike the Mason-built structures in Fort Smith and Little Rock, some did not survive the Great Depression.

One was a structure commissioned by the Shriners organization, an appendant body to Freemasonry, on Michigan Avenue in Chicago, which is now the InterContinental Chicago Magnificent Mile hotel. Even though re-purposed, it still bears some Shriners' markings.

Graham said there was a huge influx of members into the Masonic fraternity in the 1910s and 1920s, then membership dropped off during the Depression. Numbers picked back up again after World War II, Graham said.

"Now it's sort of back down, so these very large buildings become harder and harder to maintain when most of the money used to operate and maintain the building are membership dues," he said.

In December 2014, the 162-year-old Scottish Rite Temple in downtown New Orleans sold to a local developer for $3.25 million. The city's Freemasons had owned it 110 years.

The Scottish Rite Masonic Temple on Wilshire Boulevard in Los Angeles sold in 2013 to the Guess jeans founders: brothers Maurice and Paul Marciano. They bought the property for $8 million after about two decades on the market and had plans to turn it into a private art museum for their personal collections.

In the case of the Fort Smith temple, "the roof was leaking, the air-conditioning system had a problem, the basement had flooded," Graham said. "There were significant structural issues."

After a hard look at the chapter's finances, the decision was made in January 2013 to move the chapter to Fayetteville, close the Fort Smith temple and put it up for sale.

"We were sad to have to sell the building, but we're happy that this group is very interested in preserving the history associated with the building," Graham said. "So that aspect of it is very gratifying for us."