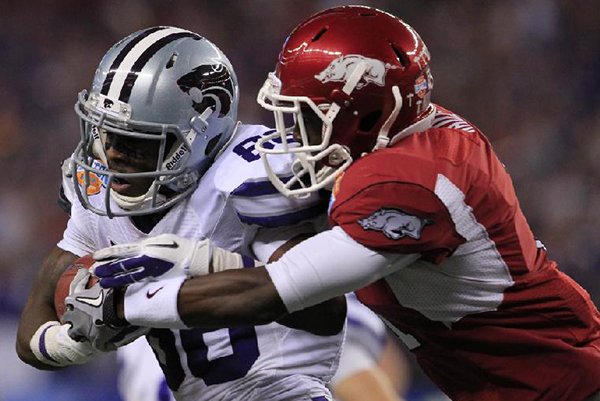 Arkansas and Kansas State last played in the 2012 Cotton Bowl at Cowboys Stadium in Arlington, Texas. The Razorbacks beat the Wildcats 29-16.

FAYETTEVILLE — Arkansas will play Kansas State in the 57th Liberty Bowl on Jan. 2 in Memphis, Tennessee.

It will be the fifth time the Razorbacks will play in the bowl game and first time in six years. Arkansas beat East Carolina in the Liberty Bowl following the 2009 regular season.

5 Things to Know About Kansas State

Kansas State (6-6) will play in the bowl game for the first time.

The Wildcats enter the game on a three-game win streak. Kansas State is only the third program in college football history to make a bowl game during a season in which it lost six consecutive games.

The bowl will pit Arkansas coach Bret Bielema against one of his coaching mentors, Kansas State's Bill Snyder. Bielema was an assistant coach for Snyder at Kansas State from 2002-03.

It will be the second ever meeting between the programs in a bowl game. The Razorbacks beat the Wildcats 29-16 in the 2012 Cotton Bowl.

Editor's note: An earlier version of this story stated the game would be the second meeting between the schools. It has been changed to reflect the number of bowl games between the programs.