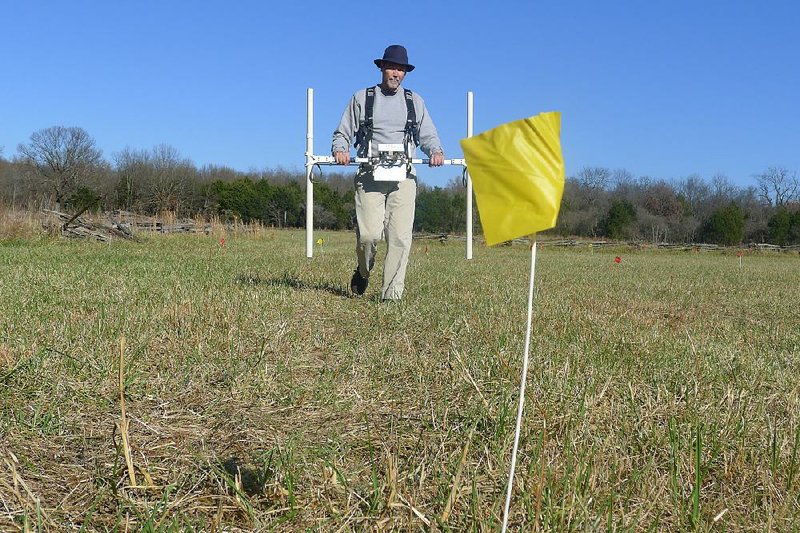 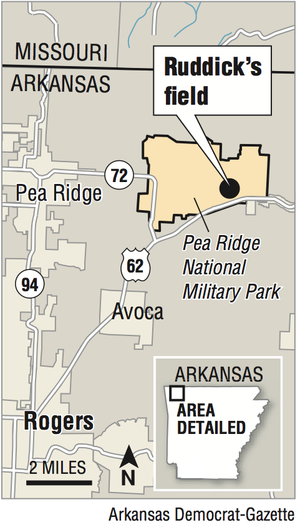 They hope the technology will give them a better idea of where the battle lines were drawn in Benjamin Ruddick's cornfield, where heavy fighting took place during the Civil War.

"We're attempting to make a density map of the fighting across this landscape," said Jami Lockhart, director of remote sensing for the Arkansas Archeological Survey in Fayetteville.

Brandon said this is the first time that large-scale landscape remote sensing has been used for battlefield archaeology.

The Arkansas Archeological Survey is part of the University of Arkansas System. The Survey is a partner in the study with the National Park Service, which oversees the Pea Ridge park.

Carl Drexler, a station archaeologist with the survey in Magnolia, is an expert on Civil War artifacts and battlefield archaeology. He is working with other researchers on the Pea Ridge project.

"The technology being used at this stage would pick up shell fragments well but would also get things like weapons parts, bayonets, iron personal objects, wagon parts and other finds that would give us both a much better idea of the disposition and movement of troops during the battle and unique connections to the men who fought, suffered and died on Pea Ridge in 1862," Drexler said.

He said the metal found at Pea Ridge would likely be within 2 feet of the surface.

The Pea Ridge campaign was arguably the most significant campaign of the Civil War in the Trans-Mississippi region, according to The Encyclopedia of Arkansas History and Culture.

The Union Army of the Southwest under Brig. Gen. Samuel Ryan Curtis defeated the Confederate Army of the West led by Maj. Gen. Earl Van Dorn in the Battle of Pea Ridge on March 7-8, 1862, and played a pivotal role in claiming Missouri for the Union and opening Arkansas to Union occupation.

Traditional battlefield archaeology has been conducted at Pea Ridge, but not at Ruddick's field. That's why this project is starting there.

"This is a pretty pristine site," Brandon said. "So many battlefields overlook shopping malls."

Lockhart said he hopes the work will give researchers a better idea about the extent of the fighting in Ruddick's field.

According to a sign at the site, "As the sun set on the first day of battle, about 3,000 rebels from Missouri made their final charge here. Crossing Ben Ruddick's stubbled cornfield, they ran straight toward the muzzles of federal cannons set wheel hub to wheel hub against a line of trees. After hours of fighting withdrawals, this Union line held firm. Rebuffed Confederates ebbed back to Elkhorn Tavern. In the dark, men of both armies feared they were standing on the brink of collapse."

"But no one has combined the two," he said. "We are doing large, landscape-scale remote sensing as a new way to approach battlefield sites."

By doing this, researchers can tell where the earth has been disturbed. That includes digging, plowing, burning or bombarding with artillery.

"We can see linear striations through this field," Lockhart said. "That may be early plowing marks."

Excavation work, based on information from the gradiometers, will probably begin in January.

"All of these technologies come to us from geology, where they're looking for bigger things deeper," Lockhart said. It took a while for the technology to be tweaked to the point that it was applicable for archaeology.

Looking at a laptop computer Thursday, Lockhart said he could see dark marks underground detected by the gradiometers. Further research would give him and others an idea about where to conduct excavations.

When the digging begins, only samples of what's found will be removed from the earth, Brandon said.

Archaeologists with the National Park Service found some 2,700 battle-related artifacts at Pea Ridge when they worked there from 2001-03, Drexler said. Besides bullets and cannon shell fragments, the artifacts included buttons, forks, parts of knapsacks and pieces of firearms.

"This is one of the best-studied battlefields in the country," he said. "This was the biggest, most important battle west of the Mississippi."