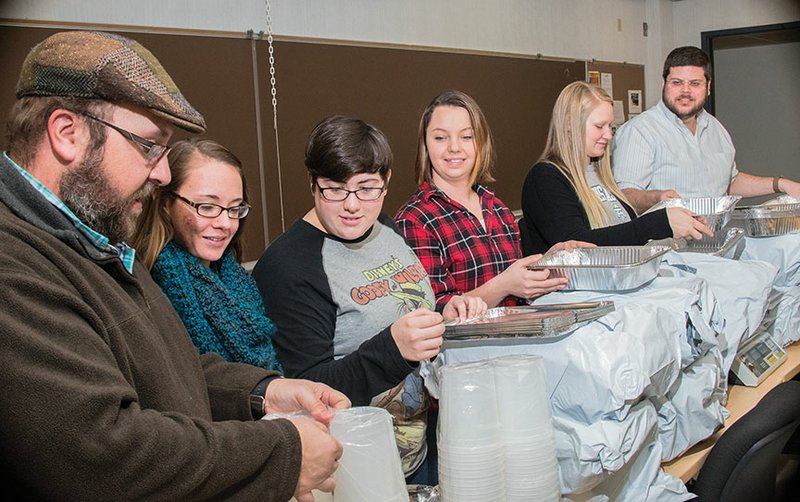 Sean Huss, from left, associate professor of sociology at Arkansas Tech University in Russellville, with students Lauren Palmer, Kendall Tubb, Kaylynn Newhard and Jenna Cahoon and assistant professor of sociology James Stobaugh, unpack pans that will be used to store food that is saved from the campus cafeteria. The students, part of the Because We Can organization on campus, won a $6,000 grant to start the food-recovery program. Huss and Stobaugh are co-advisers of the group.

Some Arkansas Tech University sociology students came to class and got mad; then they took action.

The students, who formed the Because We Can organization, have received a $6,000 grant from The Campus Kitchens Project to recover and distribute to the community food that normally would be thrown away in the university cafeteria, and they also plan to start a campus food pantry.

Arkansas Tech will be the first Campus Kitchens Project partner in Arkansas.

ATU junior Kendall Tubb said she and two other students, Jenna Cahoon and Matthew Freeman, founded Because We Can after discussions in the History of Social Thought class, taught by Sean Huss, associate professor of psychology.

Since the Because We Can organization started about a year ago, it has sponsored toy and canned-food drives, as well as helped other groups on campus with service projects. Huss and James Stobaugh, assistant professor of sociology, are advisers for the program.

“We formed Because We Can just kind of with a goal to help society and to inspire other people to want to help, especially college students,” Tubb said. “We know this is a very valuable time in a person’s lifetime, and you’re preparing to go out in the world.”

In May, ATU President Robin Bowen suggested at a round-table discussion attended by student Lauren Palmer, a co-chairwoman of Because We Can, the idea of a food-recovery program.

Palmer said she was aware of the University of Arkansas at Fayetteville’s food-recovery program because she had seen the program on Facebook and had been in touch with the leaders about participating in an Earth Day fair at Tech. She brought the food-recovery idea back to Huss’ class.

“We all looked at each other and said, ‘We can do this,’” Huss said. “In all my classes, I teach, ‘You can make a difference; you just have to be motivated to do it.’”

The students and advisers went to the University of Arkansas at Fayetteville in the summer to tour the university’s food pantry and learn about its food-recovery project.

Although the U of A launched its own program, its leaders suggested that Tech work with The Campus Kitchens Project in Washington, D.C., which partners with schools, colleges and universities to recover food and distribute it to the community.

As it so happened, The Campus Kitchens Project was holding a grant competition with a looming deadline. With about a week’s turnaround time, Arkansas Tech students made a video and posted it on social media. The students didn’t choreograph an elaborate production or use gimmicks; they talked honestly and passionately about why they wanted to win the money to help others

Cahoon, a senior, shared that when she was growing up, her family frequented food pantries.

“As a child, I didn’t really understand; my mom never wanted us to feel like we didn’t have enough,” she said in a telephone interview. Cahoon, who has three brothers, said her mother worked at a grocery store at the time, and her father is disabled.

“I remember getting baskets of food and thinking it was the best day ever. We’ve even had Thanksgiving meals from food pantries, where we wouldn’t have anything,” Cahoon said.

Cahoon said she has scholarships to pay for college, thanks to her mother emphasizing the importance of education to her and her brothers. However, after Cahoon pays her bills, money is tight, she said.

“I have a little bit of money left, but sometimes it gets iffy when I can eat,” she said.

Palmer saw hunger from the other side.

“I remember going to our church with my mom and volunteering with the food pantry,” Palmer said. “I remember people coming in and how grateful they were.”

Cahoon said “at least” 15,000 people in Pope and Yell counties have food insecurity, a household with limited or uncertain access to adequate food.

“It’s a major number; that’s a lot of people. If someone needs help, you should be able to get help. We’re not doing this to get a happy feeling; we’re doing this because there’s a need. We want to fill a need,” she said.

Food-recovery training will begin in January, and the $6,000 will pay for disposable pans, hairnets, gloves, etc., Cahoon said. The staff of Chartwells, which manages the Chambers Cafeteria on campus, will show students how to package food safely. In February, representatives of The Campus Kitchens Project will come to campus to work with Because We Can to officially launch the program, said James Stobaugh, co-adviser of the student organization.

Tubb said administrators of Chartwells have been supportive of the idea.

“They’ve been super awesome; they aren’t happy with the food waste, either,” Tubb said.

Todd Nixon, director of dining services at Tech, said he thinks the food-recovery idea is “a great program.”

“We do have overproduction that comes through our facility, and it will be provided to them,” Nixon said.

He said 3,600 meals a day are served in the Chambers Cafeteria. Leftover food is not served the next day as the original entree, he said, but sometimes the food can be used to create a new entree and offered as one of the options.

Nixon said students are encouraged to take only what they will eat so as not to waste food, but it happens. The food students take and don’t eat cannot be recovered, but the overproduction in the cafeteria will be provided to Because We Can, and the students will be allowed to use space in the cafeteria to work.

Joshua Gist, assistant director of dining, was transferred to Tech dining services from the University of Arkansas at Fayetteville, so he is familiar with the food-recovery program.

Gist said “thousands of pounds” of food were thrown away in Fayetteville with all its dining facilities, but he estimated that at Tech, “a couple of hundred pounds a week, maybe more,” of recoverable food is thrown away.

Chartwells has rules about how long food can sit out, even if it is still safe to eat, he said. For example, pizza might not be “appealing” after it is under the heat lamp on the line, but it could be refrigerated and donated.

“The biggest one — egg rolls, anything that’s deep-fried — we’re not supposed to re-serve that. There’s no way to get the breading back to restaurant quality,” he said. “Then it goes in the trash can. There’s nothing wrong with [the egg rolls]. There’s nothing stopping someone in a food pantry from popping them into the oven, warming them back up and serving them. It gets that calorie count back up for someone who is food-insecure.”

Gist said it’s not only annoying to throw away food because “that’s dollars going out the door.” More than that, “we’ve got food-insecure employees,” he said. The company’s policies don’t allow employees to take home leftovers.

“What this [food-recovery] program allows is for our employees who are food-insecure now, or anyone who is, to go to these shelters, and we know this food is being used. It’s not just going into the trash cans, and that does make us feel a lot better,” Gist said.

Because We Can co-adviser James Stobaugh said the food that is saved from the cafeteria will go to organizations such as Main Street Mission in Russellville and other providers.

Main Street Mission founder Marilyn Williamson said she had been out of the office and wasn’t aware Tech was starting the food-recovery program.

She said any donated food will be appreciated.

“Gosh, yes, yes, yes, yes,” she said. “That would probably be one of the biggest blessings we could get, besides financial.” Main Street Mission, a nonprofit facility, doesn’t receive any government assistance, “just whatever God blesses us with,” she said.

“We’re finishing up the week anywhere between 550 and 650 meals a week,” she said. “That would be awesome. That would be wonderful; that would help us out so much.”

The next piece of the plan will be to start a food pantry on campus, organizers said. Huss said the group is aiming to launch the food pantry in April.

He said the core idea behind the food-recovery effort is, “We want to make sure that people get fed. It’s basically a program targeted at the problems that arise because we have so much income inequality in the nation — not just off-campus, but on-campus,” he said.

Huss said classified employees, for example, have their salaries set by the state Legislature, and some of them struggle financially.

Stobaugh agreed that a need for the pantry exists on campus. He said students, staff and even adjunct faculty members, who don’t have benefits, might utilize a food pantry.

“You’re working full time and trying to do everything right, and it can be a struggle,” Stobaugh said.

Huss said that in terms of education, “we want the students not only to become active, but to become more sympathetic and empathetic about the problem,” he said. Huss said he wants students to understand that “it’s important to help, and the people you’re helping are not inherently bad or lazy or irresponsible.”

Huss, whose class was the spark for the organization, said it is rewarding to see students motivated to make a difference. “When you see them actually putting into action the things we talked about in class, that’s when you say, ‘Yeah, they get it.’”

Cahoon said the goal of the Because We Can organization is, for one, “to empower students to let them know they can make a difference. If you get a group of people and you have a desire to change something in the world, you can.”

Tubb said not only does the group hope to be able to recover extra food to help feed people and start a food pantry, “but beyond that, we want it to be sustainable; we want it to last even after we’ve graduated. We want to inspire students. We want to help — that’s our biggest thing.”

For more information on Because We Can, email Huss at shuss@atu.edu or Stobaugh at jstobaugh3@atu.edu.