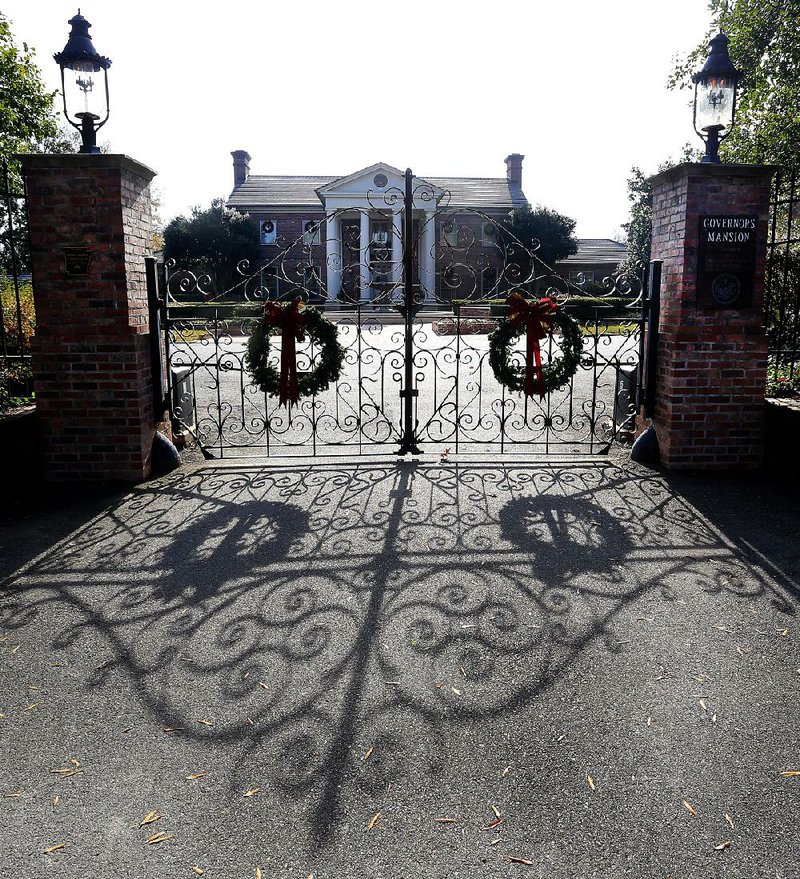 Gov. Asa Hutchinson has requested $500,000 to upgrade the security system at the Governor’s Mansion, shown Thursday behind the front gate.

Gov. Asa Hutchinson is asking the Legislative Council to authorize the Arkansas State Police to use $500,000 in state rainy-day funds to improve security at the Governor's Mansion.

The Republican governor said in a letter dated Dec. 3 to Larry Walther, director of the state Department of Finance and Administration, that the money will be used to "fund upgrades to the Governor's Mansion security system."

Arkansas State Police Director Col. Bill Bryant said in an interview that the mansion's security system is from 2003 and is an outdated, analog system -- not a digital system. He declined to provide more details.

It's a waste to invest more money in the current security system and it's more economical to buy a new system, Bryant said.

Bryant said he initiated the request for a new security system in what he called "a well-thought-out process" and not a rush to judgment.

Meeks noted that in 2008, an unknown arsonist threw a Molotov cocktail on the porch of the Texas Governor's Mansion, which was partially destroyed.

Hutchinson said in a written statement that he's requesting the use of the rainy-day funds to upgrade the Arkansas mansion's security system because the state police "has made a recommendation to improve securities [and] I accepted their recommendation and have forwarded it to the Legislature."

The state police "has been attempting to upgrade security at the mansion for some time, and I resisted those efforts," the governor said in explaining why the money for the project wasn't sought in the 2015 regular session. Rainy-day funds can be used to cover expenditures that weren't included in the normal state budget process. Either the Joint Budget Committee or Legislative Council must approve the governor's requests for the funds.

"However, the Governor's Mansion is a very public venue and plays host to hundreds of public events every year with thousands of attendees. Because it is one of the more public sites in central Arkansas, I now believe adequate security is necessary," Hutchinson said.

Hutchinson spokesman J.R. Davis said the request doesn't have anything to do with recent terrorist attacks in Paris and California or Hutchison's experience as an undersecretary of the federal Department of Homeland Security.

"But the attacks in Paris and California underscore the importance of having potential targets adequately protected," Davis said in a written statement.

Davis said there is no specific timeline to start and finish the upgrades to the security system.

Once the funds have been released, the finance department and state police will work together to implement the new upgrades, he said.

Excluding this request, Hutchinson has distributed $30.8 million from the state's rainy-day fund for 16 state programs and projects in his first 11 months in office, legislative records show. He was sworn in on Jan. 13.

The expenditures range from $7.4 million to the state Department of Correction to provide 200 more prison beds at the Ester Unit in Pine Bluff to $200,000 to replace a cooling system at the Governor's Mansion. The Correction Department received $17 million of the amount spent by the governor.