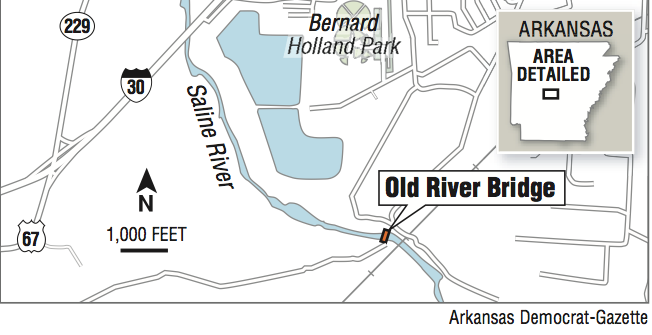 Graph showing the location of the old river bridge.

The Old River Bridge in Saline County passes over the Saline River, where pioneers used to cross on their way to Texas. It's on the National Register of Historic Places and the list of Arkansas' Most Endangered Historic Places.

Built in 1891, the bridge closed in 1974 after a truck full of concrete blocks tried to drive over its wooden-planked bottom.

Now, it's a 260-foot-long structure of rusted metal bars, bereft of a surface to walk on.

Saline Crossing Regional Park and Recreation Area Inc. and other groups have pushed for the preservation of the bridge and re-purposing for a walking and biking trail, with nature trails nearby.

Saline County County Judge Jeff Arey said he noticed the groups' efforts when he took office in January but also found that nothing had materialized to help with the bridge's high-cost replacement.

So Arey, who remembers biking over the bridge as a child from Haskell to Benton and back, decided to pursue the grant for the maximum amount: $500,000.

The Saline County Quorum Court approved of the county's grant application in March for the restoration project, which is estimated to cost even more than the grant will cover. The county received a letter of award last week.

The funds come from a federal program administered by the Arkansas Highway and Transportation Department for alternatives to car transportation.

The program funds were awarded earlier this month as a part of 71 projects approved for a price tag of $16 million.

"This $500K is a fabulous grant," said former Benton Mayor Lynn Moore, who is chairman of Saline Crossing Inc. "I mean, it's a godsend. That will allow us to get in the process of rebuilding the bridge."

Arey and other organizers said the project would ideally be part of a larger recreational trail being planned to stretch from downtown Little Rock to downtown Hot Springs.

It's named the Southwest Trail, after the path pioneers took southwest to Texas.

"I'm excited about being able to restore it, as well as being a part of the Southwest Trail," Arey said.

That project would require acquiring rights of way along the old Missouri Pacific railroad and additional construction, and it is about five to 10 years down the road, Arey said.

Mason Ellis, who was among those pitching the trail idea to Metroplan, said the trail would link historic sites, as well as provide recreational and transportation opportunities.

Eventually, he said, he'd like to form an organization to coordinate the trail's creation.

The $500,000 received from the Highway Department will take Saline County only through the first two of four phases for restoring the Old River Bridge.

Arey said the first phase involves taking the bridge down with a crane and dissembling it.

The second phase will involve rehabilitation. After that, the county will have to find other funds to build new piers and put the bridge back up.

Arey said he doesn't have a total cost estimate for the project.

The county will be able to start on the project once it receives a notice to proceed from the federal government, he said.

While the county begins its bridge project, Moore is looking ahead to the development of the land that Saline Crossing owns near the bridge.

Moore said the group would like to build a park, including nature trails, and assist in the development of the Southwest Trail.

But the original dream of restoring the Old River Bridge is closer to coming true.

"This dream has been discussed for years," Moore said. "Now it looks like we've got something that might open up this dream into reality."