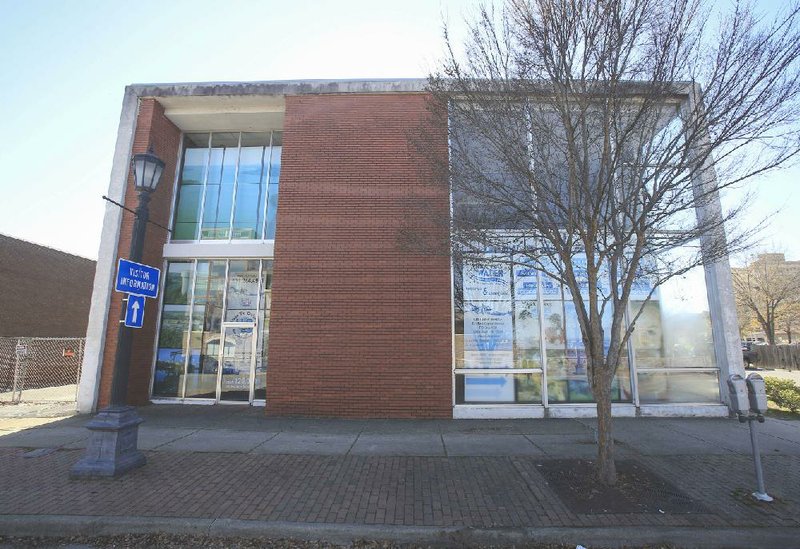 A proposal for a German beer hall at 307 E. Capitol Ave. hinges on changes the Little Rock Historic District Commission is requiring of the developer and owner -- some of which are critical to the ambience of the business, to be called Fassler Hall. 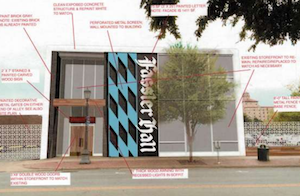 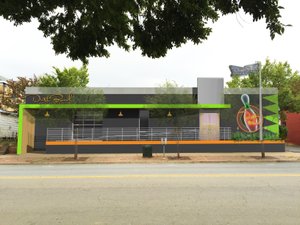 At a meeting Monday, the commission approved adjusted plans for a companion establishment, the Dust Bowl Lanes & Lounge, a 10-lane retro bowling alley to be built in the former M.M. Eberts American Legion Post next door at 315 E. Capitol. Both would be owned and operated by The McNellie's Group of Tulsa.

The two Little Rock projects would be the company's first outside its home state, said Jamie Moses, director of development for Moses Tucker Real Estate Inc., which recruited the businesses to Arkansas.

Moses Tucker owns the former American Legion building and would lease it to McNellie's. Fassler Hall is planned for the former Paragon Printing building, owned by Central Arkansas Water.

The two-story Paragon structure maintains its original brick front but is mostly floor-to-ceiling windows. The expansive sides, which appear to have been painted, are mostly blank.

Renderings by Frank Barksdale and James Sullivan of AMR Architects Inc. show the words Fassler Hall in large letters running from top to bottom of the building's front in a diamond pattern. The architects also designed Fassler Hall to have seven 10-by-10-foot overhead doors along the sides, which could be opened like garage doors to give greater access and visibility to the beer garden outside. Some commission members were against adding the overhead doors or painting the brick front.

Jimmy Moses, chairman and co-founder of Moses Tucker, said the overhead doors are necessary for McNellie's to carry out its concept for Fassler Hall.

"It's a German beer garden that they want to build, and having access to the outside space is critical," Jimmy Moses said.

He told the commission that the Paragon building has been largely vacant for at least 25 years except for goods stored there by Central Arkansas Water. Both establishments would be sit across from Rock Region Metro's River Cities Travel Center. Moses Tucker has built, is building and manages several nearby apartment complexes.

"The east end of Capitol Avenue, particularly in this neighborhood, has really deteriorated over the years," Moses told the commission. "The activity in the street and neighborhood has been tough to deal with." Moses Tucker, working with the water utility, was successful in closing the alley between the two proposed establishments.

"We're trying to add life and energy back into a neighborhood, particularly on the commercial side, that really needs it," Moses added.

A decision on the Fassler Hall plan was tabled until the commission's January meeting with changes to AMR's renderings due in less than a week. Both businesses will require approval from the city's Board of Adjustment before plans can advance through the building process, said Brian Minyard, a city planner who oversees the activity of the commission.

The bowling alley and beer hall differ in that the 1947 Paragon building is considered a "contributing structure," meaning that its design should be held to a higher standard. The legion post building, which went up around 1968, is not. Neither is listed on the National Register of Historic Places, though both are within the MacArthur Park Historic District.

Adding the doors to the Paragon building would alter the property in such a way that its status could change from contributing to noncontributing the next time the area is surveyed for preservation purposes, Ralph Wilcox, national register/survey coordinator for the Arkansas Historic Preservation Program, said in a November email to the city. There are few mid-century modern buildings within the MacArthur Park Historic District, he said.

Wilcox described a contributing property as "usually something that was built during the period of significance and it's something that was pretty much unaltered." A change in status for the Paragon Building would happen, if it is altered, when the next survey is conducted. The MacArthur Park district was surveyed within the past two to three years, he said.

Surveys are not arbitrary, he said. They're usually done when there's been a significant change to a historic area.

Moses suggested that if Fassler Hall was to someday leave the building, the doors could be filled back in.

"If things were reversed, we would be more than willing to re-evaluate it, to see if it should be changed back to contributing," Wilcox said Tuesday. "And that's something we do pretty regularly."