Episode VII is pure homage, and still better than Episodes I, II, III by PIERS MARCHANT Special to the Democrat-Gazette | December 18, 2015 at 2:29 a.m.

Poe Dameron (Oscar Isaac) is a T-70 X-Wing fi ghter pilot who becomes a leader of the resistance in Star Wars: Episode VII - The Force Awakens.

I come to Star Wars: Episode VII - The Force Awakens with more than a little baggage. Allow me to take you back to the early summer of 1977. I was 10 years old, the absolute perfect age to take in a spectacular, laser-strewn epic about a young man finding himself and becoming a hero. I was utterly transfixed. That summer, my friend and I watched it every Friday night at our local cinema -- which was kind enough to keep screening it through August -- until we knew every scene cold. I didn't think I could like anything as much as I liked that film, but I was proved wrong. 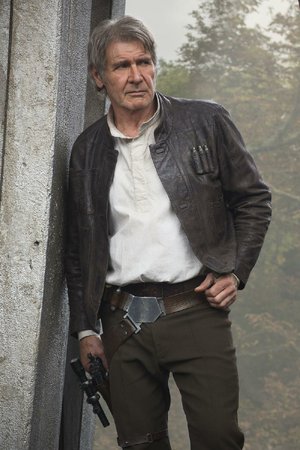 Han Solo (Harrison Ford) is grayer but possessed of the same fashion sense he displayed all those years ago in Star Wars: Episode VII - The Force Awakens. 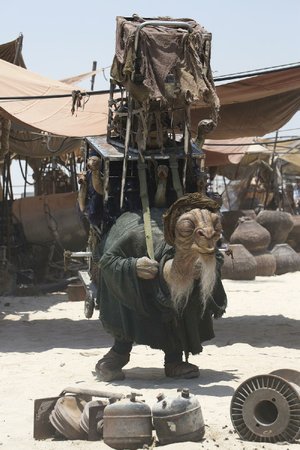 Bobbajo, a Nu-Cosian “crittermonger” and storyteller, is one of the new characters introduced in J.J. Abrams’ Star Wars: Episode VII - The Force Awakens.

Jump ahead to 1980, three years later. I'm now a gangly 13-year-old, just tasting the dark, syrupy nectar of adulthood, and The Empire Strikes Back, with all its creeping foreboding and philosophical mysticism hit me right between the eyes. I remember actually being physically exhausted after watching it the first time, sweaty and jumpy, as if I'd been up there in the bowels of the cloud city, dueling to the death with my sworn enemy.

The Leigh Brackett and Lawrence Kasdan-penned Empire seemed to me to be almost perfect in the way it set up the concluding chapter of the saga. Screenwriters will always tell you the second act is the hardest, because it has to not only expand on the first act, it also has to drive the impetus for the third. A good second act makes the third act flow almost effortlessly; a bad one can send everything into a tailspin. But here, I was supremely confident that Empire had made a perfect pitch for Lucas to knock out of the park. All he had to do for Revenge of the Jedi (original title) was answer the questions sustained in the previous film. The hard part was over, I was certain ...

... right up until I watched Return of the Jedi in 1983. I was 15 by then, very much ready for something deep and meaningful and darkly satisfying. Instead, I got a Muppet movie with a crop of annoying teddy bears, and a cripplingly poor story that more or less just ripped off A New Hope. I can tell you, driving home that night with my friends -- many of whom were still deluding themselves that the film was somehow redeemable -- I have never felt as bitter about a movie. I seethed with anger at Lucas' sell-out -- and make no mistake, that film was entirely about moving massive amounts of merchandise, as Lucas cannily owned all the merchandise rights as part of his original deal with 20th Century Fox. That night I swore I would never watch another Lucas-penned Star Wars film, a blood oath I absolutely maintained for the last trilogy -- which, by most accounts, was every bit as dreadful as I might have imagined.

So we jump ahead, finally, to this latest installment, helmed this time by J.J. Abrams, from a script penned by Abrams, and our old friend Mr. Kasdan. As Lucas' involvement was minimal -- he had sold the Lucasfilm rights to the franchise to Disney in 2012 for a reported $4 billion -- I granted myself the opportunity to watch it, and I'm mostly glad I did.

It's far from perfect, but Abrams, a fanboy at heart, takes great pains to recall much of the gritty atmosphere and the vibrant visual vibe of the original. Shots, cross-wipes and script beats are taken almost verbatim from the original film -- far beyond the obligatory galaxy shot-and-pan immediately following the front story crawl -- as is the look and feel of Lucas' best work in Episode IV. Part of this is directly due to the production team's wisely eschewing Lucas' damnable green screen fixation, and instead filming it on location (everywhere from Ireland to Abu Dhabi), using as many practical effects -- and dirty, rusty props -- as possible, but it also clearly stems from an outpouring of Abrams' unabashed love for the 1977 epic.

True to form, we meet a host of new characters very quickly. There's Poe (Oscar Isaac), a lead fighter pilot from the resistance (the new faction of rebels, banded together against the sinister First Order, nee the Empire), who has come to a distant desert planet to track down a potential clue to finding the whereabouts of Luke Skywalker (Mark Hamill), derisively dubbed the "Last Jedi" by Supreme Leader Snoke (Andy Serkis, who appears as a giant version of Gollum, only with a bad case of cauliflower ears). Given a digital map by an elderly warrior (Max von Sydow), Poe hides it in his droid, BB-8, just before being taken prisoner by the evil, mask-wearing Kylo Ren (Adam Driver), a strong but still callow Vader-worshipper, dispatched by Snoke to ferret out Skywalker in order to crush the Jedi's last remaining hope.

BB-8, bereft of owner, gets hogtied and taken to a trading colony some distance away, where it runs into the dashing Rey (Daisy Ridley), a desert scavenger stuck on this forlorn place many years ago by a parent whom she still desperately hopes will return to rescue her. They, in turn, are eventually joined by Finn (John Boyega), a storm trooper deserter, who escapes out of the Imperial Star Destroyer he has been assigned to, and quickly gets caught up in Rey's quest to reunite BB-8 with the resistance. Together, they escape the planet in the old, battered Millennium Falcon during another Imperial raid, and head off into the galaxy, where they eventually encounter the original owner of the Falcon, Han Solo (Harrison Ford), and his Wookie first mate, Chewbacca (Peter Mayhew).

If this setup sounds remarkably familiar, it's because of how nakedly and unapologetically it apes the original film. Abrams always seems more comfortable mining and refining his childhood obsessions than coming to something new and original. His take on Star Trek was equally respectful of the show's legacy, even if his reimagining often dips into pure derivativeness.

To be sure, The Force Awakens takes its legions of rabid fanboys very seriously, throwing them meaty bone after bone. There's John Williams' legendary score; an homage to odd, green food on the desert planet; the First Order as a fascist dictatorship, evoking the Nazi movement all the way to a Third Reich-like gesture before the evil General Hux (Domhnall Gleeson); a cantina filled with scurvy aliens and muckrakers drinking from smoking goblets and gibbering indecipherably; Han Solo whispering the line "I've got a bad feeling about this"; Star Killer Base, another giant, planet-destroying weapon fashioned by the First Order that the resistance dutifully is dispatched to destroy; and, a black-caped, dark side devotee wearing a face-covering helmet (masking eerily Saturday Night Fever-esque hair on Adam Driver it turns out) and wielding a formidable looking lightsaber; and more father-son theatrics concerning the dual sides of the Force.

In short, there's so much of Star Wars: Episode IV DNA welded to the thing, there's very little that actually feels new or striking. Of any of the new characters, Finn would be the one that could stand out on his own -- taking one of the faceless storm troopers out of the masses of laser-fodder and giving him an identity is one of the film's lone true innovations -- but the combination of an underwritten part and Bayeda's questionable acting chops makes him almost entirely fungible.

Certainly, it's a kick to see Han, Chewie, C-3PO and R2-D2 again, somewhat more painful to see Leia (Carrie Fisher, whose former hard-partying lifestyle has left her barely recognizable), and a pleasure to watch a Star Wars installment that doesn't make me want to jump out of a window and land on something sharp, but there's still the powerfully lingering sense that the film is more dutiful homage than true inspiration. Part of the absorbing power of the first two films was watching something you hadn't seen before reveal itself before your eyes. That's what beckoned to me so powerfully as a kid. The Force Awakens packs a hell of a nostalgia trip -- and a welcome one, it must be said -- but beyond that, doesn't have much to say on its own. In the end, it's a Force of a remarkably similar color.