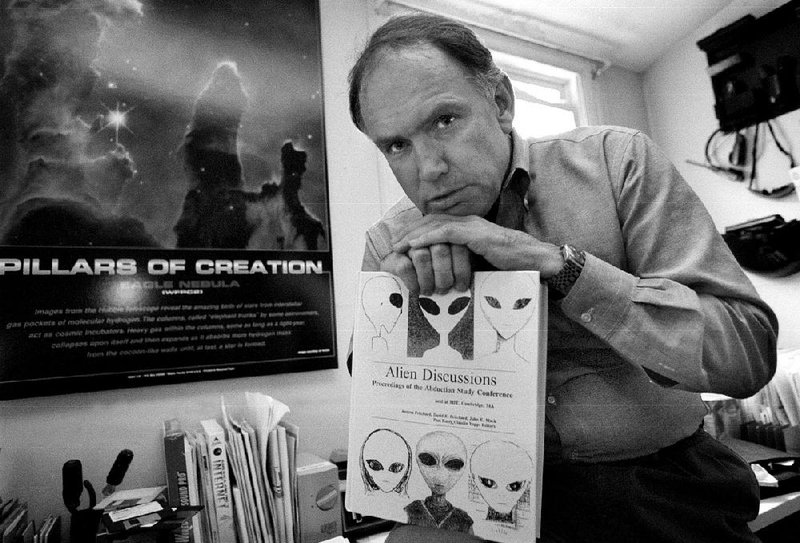 Stephen Bassett, self-appointed lobbyist for those who say they’ve had encounters with aliens, finds getting an appointment on Capitol Hill is as difficult as getting to the truth about UFOs.

He had spent four months working for the Program for Extraordinary Experience Research out of a modest town house in Cambridge, Mass., when he had the epiphany: He could continue his research with John Mack, the leading authority on the alien abductions, for the rest of his life, but it would never make a difference.

"It occurred to me that it wasn't a scientific problem, but a political one," he said. They could pile evidence of extraterrestrial encounters from the White House lawn to the moon, and no one would pay it any mind. What the issue needed was someone who could get the powers-that-be to listen.

The alien issue was really heating up in 1996, what with the summer blockbuster Independence Day, and Bassett worried that someone else would get the same idea. So he quit his volunteer gig, piled his belongings atop his beat-up Mazda RX-7 and drove off to Washington.

"I get down there, and I file" the lobbyist papers, he recalled. "I'm the first one. Nineteen years later, I'm still the only one. I could of taken my time."

Bassett, a balding man with expressive eyes that seem to go from blue to green, has long had one goal: get the government to admit it has been covering up proof of alien visits. It has been a lonely battle, but he is convinced that the stars have finally aligned for his convoluted theory, which involves the Clintons, their longtime adviser John Podesta and a now-deceased billionaire.

"I want to see disclosure by the New Hampshire primary," he said brushing crumbs off his black dress shirt and purple tie during lunch at the National Press Club this month. "And I can make the case that it's going to happen."

Bassett was born in 1946 to a military family that moved all over the country. He read science fiction, built model planes, enjoyed the cheap bowling and milkshakes on the bases. His father rarely spoke to him and fought constantly with his mother. And Bassett struggled with obsessive-compulsive tendencies.

He entered Georgia Tech just as the United States was going to war in Vietnam. While he was able to avoid the draft, the conflict darkened his worldview. There were too many secrets being kept, he felt; his country seemed on a path to disaster.

After college, he spent a couple of aimless decades freelancing as a tennis pro and business consultant, subsidized by an inheritance from his father. Then, a book changed his life.

It was called Abduction: Human Encounters with Aliens, and unlike other literature on the subject, it was written by an acclaimed scholar: Mack, a Harvard psychiatrist with a Pulitzer Prize for biography under his belt. Mack, who died in 2004, began his research as a skeptic, interviewing dozens of subjects who he at first assumed suffered from mental illness. In the end, he wasn't so sure.

"Yes, I take these people's stories seriously," Mack told the Chicago Tribune in 1994. "Yes, I think that they are telling the truth."

Bassett, the former sci-fi geek without a sense of place in the world, finally found something he could dedicate himself to.

In 1961, the astronomer Frank Drake developed an equation to estimate the abundance of communicative alien civilizations.

Considering the vastness of the universe, it's not crazy to imagine that someone's out there. One theory why we haven't encountered anyone is perhaps that all advanced civilizations are doomed to come up with a technology that destroys them before they get a chance to go calling.

That's a pretty bleak scenario. It's no wonder that many earthlings cleave to a more optimistic theory, that alien visits have happened but the government conspired to cover it up. According to a poll published by the Huffington Post earlier this year, about half of all Americans believe in some kind of alien life, and a quarter even think visitors have come to Earth.

Yet getting appointments on Capitol Hill wasn't easy for an advocate who believed that aliens landed at Roswell in 1947 and that the nation's leaders created a "truth embargo" to keep information from getting out.

"Nobody there wanted to touch it," Bassett said.

In 2013, unable to get anything close to a real congressional hearing, he created a fake one. With a $1 million donation from a Canadian believer, Bassett paid former members of Congress such as Alaskan Sen. Mike Gravel and Maryland Rep. Roscoe Bartlett $20,000 to spend a week at the National Press Club listening to testimony about UFOs.

The hours of testimony, from former Air Force officials who believe they saw spacecraft, or accounts of animals found dissected in their pastures, led to some lighthearted stories but no movement with any current members of Congress. Then came the tweet heard around the world.

The message was from Podesta, the former top aide in Bill Clinton's White House, as he stepped down after 11 months as special adviser for President Barack Obama.

"My biggest failure of 2014: Once again not securing the #disclosure of the UFO files. #thetruthisstilloutthere," he tweeted on Feb. 13.

It was retweeted thousands of times and picked up by mainstream media reporters across the country, most presenting it as a joke. But to Bassett and fellow believers, this didn't read like a bit of ironic Twitter humor. This was big.

Podesta, in fact, is probably the closest thing to an ally this issue has. He's an X-Files fan who has called for greater transparency on UFO-related matters and has written the foreword to a best-selling book called UFOs: Generals, Pilots, and Government Officials Go on the Record. In it, he wrote: "It's time to find out what the truth really is that's out there."

The fact that Podesta was moving on to chair the Hillary Clinton presidential campaign had folks like Bassett buzzing.

"You don't just send that out," Bassett said. "It means something."

By Bassett's telling, the Clintons have been deep into UFO matters since 1993 when billionaire Laurance Rockefeller, Standard Oil founder John D. Rockefeller's grandson, began lobbying them to release all information that they had about extraterrestrials.

For three years, Rockefeller corresponded and met with members of the White House's Office of Science and Technology Policy, according to the results of a Freedom of Information request filed by Grant Cameron, a Canadian researcher. In 1995, Hillary Clinton met with Rockefeller at his ranch; a memo from the office's director, Jack Gibbons, alerted her that Rockefeller would "want to talk with you about his interest in extrasensory perception, paranormal phenomena, and UFOs."

"They were engaging with the ET issue at the behest of a billionaire, and there was no coverage," Bassett said.

Still, how does any of this suggest that the government is going to open its supposed alien-visit files before the New Hampshire primary?

"I believe Clinton's team has calculated that they cannot make it out of the election without first dealing with the ET issue," he said. "But what are her options? If she calls a press conference and gives it too much gravitas, she'll still have to deal with the fundamental question of why she hasn't talked about it in the last 23 years. The alternative is to trigger the press to ask her about it. ... Then she can measure exactly the amount of gravitas she wants to give it."

The tweet, Bassett believes, was intended as the bait for the media.

One small problem with the theory: Both the Clinton campaign and Podesta's office refused to comment for this article.

And to be frank, few people are going to take Bassett seriously.

"He makes statements that are completely unprovable and put him on the fringe," said Leslie Kean, who wrote the UFO book that Podesta contributed to.

Yes, there have been unexplainable phenomena in the sky, she said, and sure, the government should investigate. But to claim that aliens have interacted with people just hurts the cause. "His ideas are silly and makes it harder for serious people to make progress," she said.

Even Bassett's closest supporters express doubt about how close we are to the truth.

"He's one of the most overly optimistic people I've ever met," said Joseph Buchman, a fellow believer. "I find that endearing, but I don't know if it's quite as close to happening as he thinks it is."

Bassett has sacrificed a lot for what he calls the "least-funded advocacy group in history. (He says he gets about $15,000 to $20,000 in donations per year.) He often sleeps on supporters' couches. He has little time for a social life.

"It would be nice to have a mate, someone to share this with, or a kid that could likely go to the stars," he said. "But that ship has sailed."

It may seem like a strange cause to give your life to, but Bassett sees a larger mission. Unveiling the truth about aliens is really just the start.

"Once that is pulled down, you will see a shift in focus from the world," he says. "More transparency, more communication among countries, an age of reform."

If only the people of Earth realize there's something out there greater than us, he said, perhaps then we can set aside the petty differences that are poised to destroy us.

Lots of people pray for world peace. Is it so strange for Bassett to seek help from above?