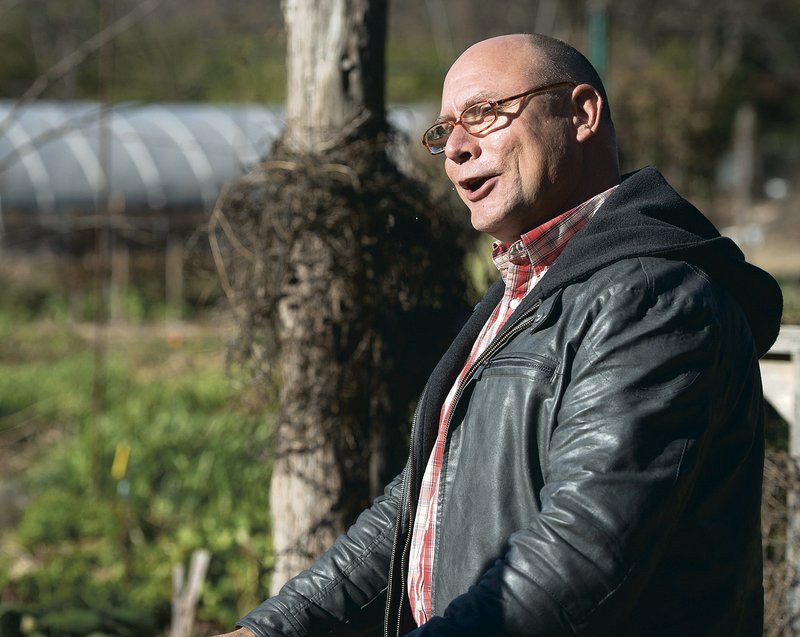 When Don Bennett lost his job, his eyes were opened to the isolation of unemployment and the overwhelming food insecurity for many Northwest Arkansas residents. He began Tri-Cycle Farms to bouy food security in the area while building community.

Beneath the soil is thread-like, branching Mycelium. It extends and latches onto the roots of all plants, creating a network to share nutrients. 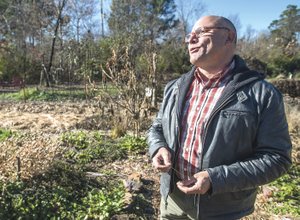 Photo by Anthony Reyes
Tri-Cycle Farms is a resource for learning how to create a garden and farm within city limits, says Don Bennett. The nonprofit loans tools, personally helps jumpstart the garden and provides places for food exchange.

Don Bennett likes to teach children and adults alike about the connecting powers of the vegetative fungus because it's not unlike the appeal of Tri-Cycle Farms, which he founded.

When: A capital campaign extends through Dec. 31

Where: The farm is at 1705 N. Garland Ave. Fayetteville. Donations can be made online.

Because, after all, there is plenty of nourishment to go around; it's just ending up in the wrong place.

"We're throwing away 43 percent of our food," Bennett says, referring to the nationwide rate of postharvest food waste in the United States, which translates to more than 100 billion pounds of food each year. "It's going to landfills, and we've got to work to prevent that.

"If some of the smaller [food] producers could come together and have a connected period ... we could help each other to [result in] being able to say there's never a period of time that they don't have food."

The most obvious function of Tri-Cycle is as a farm. When guests arrive, they see an old farmhouse, a barn and two acres of gardens complete with rows of crops, chickens in a coop and permaculture edges. At one edge is maybe a dozen large, covered plastic barrels full of rainwater saved for future use and some picnic tables for times of gathering.

"We're in the center of the city, but it doesn't feel like it," Bennett says, noting that it's a great environment for a meeting place. "I've seen people's faces as they come [here] for the first time. They come around the barn, and something washes over them. You can see the transformation of their whole body language, of 'Wow.'"

From the farm, Bennett and his team of volunteers grow a large variety of plants, including annual, perennial and medicinal plants. It's a ready demonstration and teaching tool when students from Asbell Elementary (or any other guests) come to visit. Bennett let's them taste the vegetables, learn about how some of the plants are used and help with the farm chores.

"I get kids that come [here] and say, 'I don't eat vegetables,' like it's a badge of honor," Bennett says. "I let them try some things and tell me if they don't like it because that's part of eating [well], determining what you do like and don't."

But Tri-Cycle also functions as a food storage facility -- a temporary landing place for the donations from big-name companies (like an impending partnership with the Whole Foods set to open in Fayetteville) until their beneficiaries can make room for them.

Bennett makes sure that the food is spread around the community evenly through what he calls a Thirds Share program. One-third goes to farm volunteers, one-third goes to public food pantries and community meals and one-third is sold at local restaurants and farmers markets to generate funds to keep the farm sustainable.

It's important to him to see the community and his neighbors fed, because there was a time in Bennett's life that he didn't know where his food was going to come from, either. When the economic recession began, Bennett lost his job as an architect and went to visit a friend.

"I walk into a friend's house, and she tells me, 'I don't know what I'm going to eat next week,'" Bennett says. "Here's someone who's got a degree, who has two jobs and is looking for a third, has a modest house and well, something's definitely wrong if you can't make it [on that]."

He experienced the isolation of unemployment and reflected on, historically, how food was made. Bennett thought of his grandparents, who didn't have much money, and decided he would follow their model of gardening.

Through the formation of Tri-Cycle, he could help others who were unemployed or in need do the same: build a garden and keep enough farm animals to feed a family without it costing an arm and a leg.

Since then, he and his volunteers have established the Crossroads Farmers Market to give their neighbors (many of whom don't have vehicles) a closer option for buying food. They started a residential garden at North Creekside apartments and show others how to set up an urban garden to make efficient use of their lawns. Tri-Cycle hosts a seed exchange in the spring and does a number of "crop mobs" (flash mobs for setting up individuals' farms) throughout the year.

They lend their farming tools out and helped enact changes to Fayetteville city ordinances so residents can legally raise and keep 20 chickens, three goats and four bee hives.

In the past year alone, Bennett's team has handled 1,655 food and farming projects, putting in 9,000 hours of work (a $185,000 labor value) and did it all on a budget of $55,000. Tri-Cycle is in the middle of a capital campaign to earn that number back, with hopes that their outreach can expand and be supported by the hiring of a farm manager.

"A long time ago, it became mighty clear that when we made this two acre farm, it was about much more than two acres," Bennett says. "It's about collaborations and partnerships.

"The center of this neighborhood just broadened."