Greenbrier gets good news on many fronts 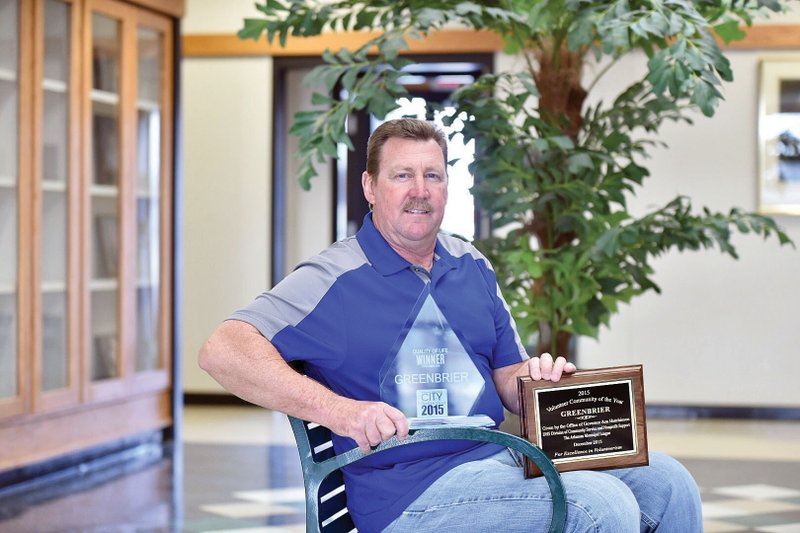 Greenbrier Mayor Sammy Hartwick holds awards the city has won in the past couple of months, including Volunteer Community of the Year. It is the first time the city has applied for or received that honor.

Mayor Sammy Hartwick said Greenbrier has been named a Volunteer Community of the Year and the safest city in Arkansas, won an Emerging Healthy Community Award, worked out a land purchase and received a surprise donation for tornado sirens.

“We’ve had a good last quarter of the year,” Hartwick said.

He said Stacey Ussery, administrator at the Greenbrier Nursing Home and Rehabilitation Center, called and left a message.

When he finally called Ussery, he said she told him, “We understand y’all at this time don’t have the money for sirens.”

When he got the final bill, Hartwick said he took it to her, “and in about three days, we had a check for half of it,” he said. “Without them, we wouldn’t be able to do it at all. I just can’t thank them enough. That’s the way people are around here.”

Ussery, who lives in Greenbrier, said that when she heard the city needed the money for sirens, she decided the nursing home should help.

“It’s something this community needs, and I just cannot imagine not having them. If it saves one person, it’s worth it,” she said.

Ussery said the nursing home is across the street from City Hall, so the employees and residents hear the sirens loudly and clearly when they’re tested at noon each Wednesday.

Hartwick said people in Greenbrier do that sort of thing, which is why he wasn’t surprised that the Arkansas Department of Human Services named Greenbrier as a Volunteer Community of the Year.

“We were excited about that. Of course, Shellie O’Quinn, … she did all these applications and sent all that stuff in, and she did just an amazing job,” he said.

O’Quinn is the director of the Melton Cotton City Event Center.

“This is our very first year to get Volunteer Community of the Year,” she said.

O’Quinn said Hartwick came to her last year and said he’d noticed other cities had Volunteer Community of the Year signs and wondered if Greenbrier could get one.

She said the honor is given through the Department of Human Services and was announced at a recent Arkansas Municipal League meeting.

“I just found the application and found out we were too late to apply for that year; I asked everybody in the community — I put some feelers out on social media and asked them to turn in their volunteer hours,” O’Quinn said.

The response was great, she said, and it included Eagle Scouts, coaches for peewee sports and churches that volunteer with schools and more.

“It was an astronomical amount of hours, and I know it’s even more than that. I thought of other things, that even I had done, that I could have included,” she said. “It was overwhelming.”

In addition, O’Quinn said Greenbrier received the Emerging Healthy Community Award for its efforts in community wellness from the Arkansas Coalition for Obesity Prevention. It was awarded for the Mayor’s 107-Plus Challenge. The third-annual event will kick off Jan. 1 and go through April 16.

Greenbrier has gotten even more accolades.

It was named the safest city in Arkansas for 2015.

“A lady informed me from SafeWise, ‘You have been elected as the safest city in Arkansas,’” Hartwick said. “We had no idea; it all dates back to police reports and stuff like that over a two-, three-year period.”

Greenbrier Police Chief Gene Earnhart said someone called him and had heard a news report about it.

“You don’t know until they publicize it,” he said. “We turn in records like we’re supposed to every month, every year, and what they do, they review the records of cities our size, … whichever has less violent crime.”

The population of Greenbrier is approximately 5,000 people, Earnhart said.

He said the city came in third in its category a few years ago.

The mayor also said an ongoing land acquisition that was delayed closed in November.

The city paid $755,000 for about 54.9 acres at 42 S. Broadview. The property was co-owned by Martha Garrett of Texas, whose father, the late Percy Matthews, was a former Greenbrier mayor. Also listed as an owner was Garrett’s sister-in-law, Wadette Matthews of Texas. When the acquisition process started, a question arose about the exact acreage because the paperwork was insufficient.

One of the ideas for the property is to create a city park, Hartwick said.

“It’s ours; we have not done anything to it yet except to bush-hog it; we’re getting a look at it now,” he said. “We’ll probably just sit on it till the first of the year; then I’m going to start meeting with some people. [The University of Central Arkansas] has that economic-development bunch that’s really good. I’m probably going to get them to help me put together a plan,” he said.