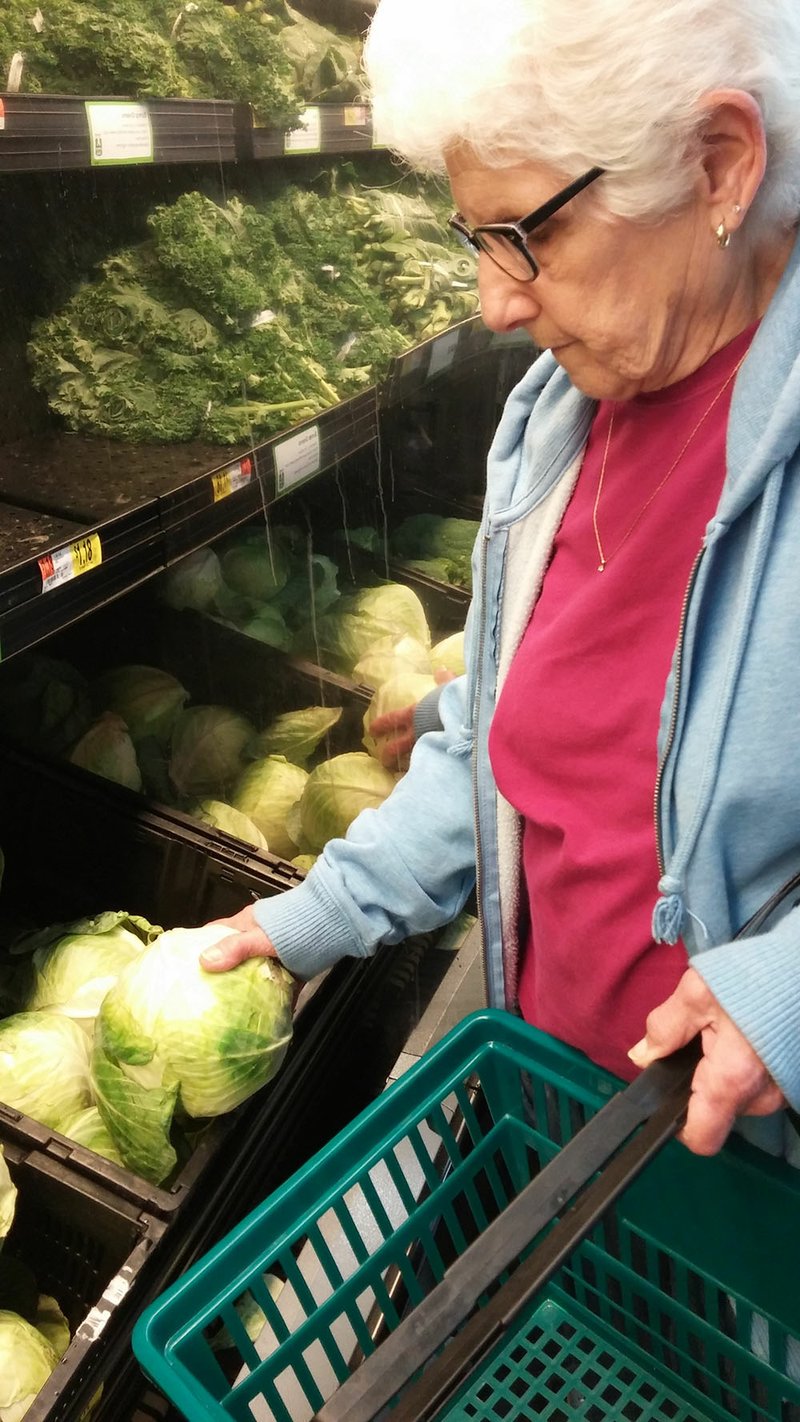 Jean Wortham of Judsonia picks out a cabbage to go with the black-eyed peas and hog jowl she will prepare for her New Year’s feast to ensure good luck and prosperity in 2016.

SEARCY — Every holiday has its own set of tried-and-true traditions. While decorating a tree at Christmas, eating turkey on Thanksgiving and carving pumpkins for Halloween are recognizable in any region of the United States, New Year’s has one tradition that is decidedly Southern. One would be hard-pressed to find the New Year’s ritual of eating black-eyed peas and hog jowl for good luck, along with cabbage on the side, to ensure a healthy supply of “foldin’ money,” north of the Mason-Dixon Line.

That fact was proven by a Southern transplant to Minnesota when she asked her neighbor if she had bought her black-eyed peas for New Year’s and was met with a blank stare.

“If you mention black-eyed peas to someone from the North, there is a good chance they won’t know what you’re talking about,” said Bill Leach of the White County Historical Society. Given some of the beliefs on how this comfort-food feast had its foundation, it is easy to see why that is.

According to littlerock.about.com, one popular explanation for the South’s association with peas and good luck dates back to the Civil War. When Gen. William T. Sherman’s Union Army was pillaging the food supplies of the Confederates, peas and salted pork were said to be left untouched because of the belief that they were animal food and not fit for human consumption. Southern forces considered themselves lucky to be left with some supplies to help them survive the winter, and black-eyed peas evolved into a representation of good luck, the website states.

Another myth states that black-eyed peas were eaten by the slaves as a way to celebrate not only the new year but the Emancipation Proclamation, which went into effect Jan. 1, 1863, according to littlerock.about.com.

Although a good many Southerners might not know how eating black-eyed peas on New Year’s got started, the reason the tradition continues can be summed up by the unanimous response to the question from a group of women lunching at the Lightle Senior Center in Searcy: “We’ve always done it, and it tastes good.”

Elizabeth Heard, chairwoman of the Pioneer Village Project in White County, said of the pea-eating practice, “My family has always eaten peas on New Year’s, and if there’s a chance it can bring good luck, why wouldn’t you do it?”

Terry Walker of Judsonia, who is known as “Hillbilly” to friends and family, echoed those sentiments.

“It’s a long-running family tradition that goes back to my great-grandmother Effie in 1891,” Walker said. “If something is passed down in your family, it is a treasure. If you’ve got recipes from your grandparents, aunts and uncles that you love, you better make sure to get them because they are lost when [your relatives] draw their last breath.”

Walker recalled that one of his grandmother’s recipes was used to play a good-natured prank on some of his Northern kin.

“She used to make pea sausage,” Walker said, explaining that peas were boiled, then ground and combined with spices. They were then formed into patties and frozen between sheets of waxed paper.

“We had some Northern relations come down, and she cooked some of the pea sausage for them for breakfast. They couldn’t tell the difference from pork, and she really got a laugh out of that,” he said.

Although the basic premise of good luck is a common thread in the eating of peas to start the year, there has been some discussion on how many and when the peas should be consumed, according to littlerock.about.com. Some eat peas right after midnight, while others make it the main course of New Year’s dinner. It is believed by some that 365 peas have to be eaten to ensure good luck for each day of the year, while others will leave a single pea on their plate to bring good luck to their neighbors, the website states.

The part that hog jowl plays in the tradition isn’t clear, except for the obvious fact that it is a tasty way to season black-eyed peas, which are generally thought to be less tasty than their purple-hulled cousins. Cabbage is also essential for those who want to have plenty of money for the year ahead, while some insist that cornbread is representative of gold coins.

Whether they are eaten at the stroke of midnight or during a college football marathon on New Year’s Day, black-eyed peas are a staple of the New Year’s holiday that are not likely to be forgotten anytime soon in the South.