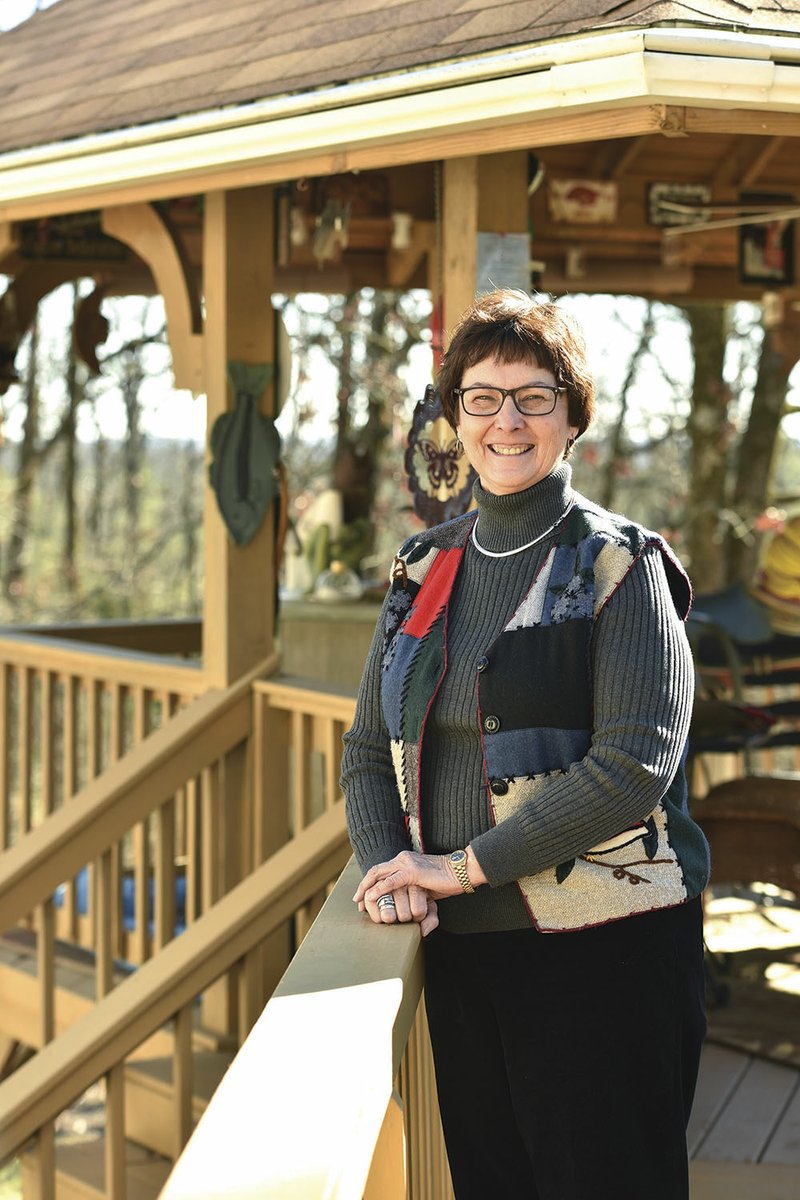 B. Jeannie Fry often watches the sun rise from the deck of her home outside of Cabot. Fry is a watercolorist and current president of the Mid-Southern Watercolorists Board of Directors.

Laughing, B. Jeannie Fry has always seen things “a little differently,” she said. “Artists always do,” she said during a visit to the 66-year-old’s home near Cabot.

“I remember when I was a little girl, my mother gave me and my sister a picture of a doll to color. I colored my doll’s hair blue. I had noticed the blue tones in movies. I saw that, and that led to my doll having blue hair.

“My mother framed a lot of my first efforts at art, but that one never got framed. Then I got to high school and was really blessed by having an art teacher who told me I had talent. She got me into a special art program where I learned about watercolor. I painted with some of the best watercolorists in the state.

“Then I got to college, but there was no watercolor class there. I took art, trying to be a painter, but I realized I couldn’t live on my art, so I got a degree in art education, thinking I would go into administration.”

“I thought I would be bored in a classroom every day, so I decided to get a graduate degree that had something to do with administration. I graduated from Michigan State and was looking for a job,”

“I came to the University of Arkansas at Fayetteville as the assistant dean of students in housing. I worked there for three years, but that still did not stimulate me,” Fry said.

“In the 1970s, Southwestern Bell was starting its changeover to AT&T. By 1974, the company was starting to hire women in nontraditional jobs,” she said.

“I tripled my salary by taking one of those jobs in 1978,” Fry said. “I worked as an installation foreman in the Little Rock area. I traveled all around the state, working in Forrest City, West Memphis, Pine Bluff and finally back to Fayetteville, which is God’s country.

“When AT&T began downsizing in 1987, I moved from Fayetteville back to Little Rock as an outside plant engineer.”

Fry said she had taken some colleges courses, such as statistics, that would count toward a degree in accounting, so by that time she only needed 12 hours to receive a designation as a certified public accountant. She enrolled at the University of Arkansas at Little Rock and received her CPA and accounting equivalency certification in 1990.

In 1996, she went to Washington, D.C., as a corporate liaison between AT&T and the federal government regarding accounting issues.

“It was the best job I ever had,” she said. “I could talk to the congressmen and their staffs about anything, from how to install a telephone pole to a switch or a cable, and I could talk about accounting issues, too.

“It was very stimulating. One of the pieces of legislation I worked on actually came up for a vote.”

“It was a good deal,” Fry said with a smile. “As a result, I could start refocusing on what I really wanted to do — paint more.

“I had continued to paint during what little free time I had all those years I worked, but I wasn’t able to do much until just recently. I still do bookkeeping for my church (St. Luke Episcopal in North Little Rock) and a few other clients, just enough to be able to buy my toys (art supplies).”

It was through her church that she met Selma Blackburn of Little Rock, a longtime member of the Mid-Southern Watercolorists.

“She is my brass ring,” Fry said. “She and I sort of clicked. She has been my mentor; she helped rekindle all those sparks that had always been there inside me.”

Fry is the current president of the Mid-Southern Watercolorists Board of Directors. She is also a Signature member of the organization, meaning she has had work in at least five of its juried exhibitions.

“The Mid-Southern Watercolorists has done more for me than anything. They offer workshops, and we often paint together. That has been a godsend for me,” Fry said.

“I wish I had connected with them the first time I was in Arkansas, although the organization did not begin until 1979. By then, I was in Forrest City or Pine Bluff,” she said.

“I encourage young artists to become involved in organizations like the Mid-Southern Watercolorists,” she said. “They really make a difference.

“We encourage young people to come to our meetings. We meet at 7 p.m. on the third Wednesday of the month, September through June, in the lecture room at the Arkansas Arts Center in Little Rock. The meetings are free, although there are dues to join.”

“I was vice president before and served as treasurer forever,” she said with a smile. “I hope that I’ve been a good president. We want to make sure the organization continues to grow.

“The Mid-Southern Watercolorists will celebrate its 50th anniversary in 2019. We have over 200 members, some from as far away as Japan.”

The Mid-Southern Watercolorists’ annual juried show will open Feb. 12 at the Arkansas Arts Center. The opening reception and awards ceremony will be held from 6-8 p.m.

Feb. 18 and is open to the public. Fry said 30 paintings have been chosen for the show.

Fry said she has tried other media — oils and acrylics — but she is primarily a watercolorist. She enjoys creating landscapes but also does abstracts.

“I do a lot of serious paintings, but I have my whimsical side, too. I like for my paintings to make people feel good. I don’t paint sad,” she said.

“I was influenced by John Marin, an early American modernist, at an early age,” Fry said. “It is one of the reasons that I even started to paint watercolor. My junior high art teacher showed us a film about John Marin painting, and I never forgot it. Shortly thereafter, I painted an abstract landscape watercolor with wax resist while I was still in junior high. It was one of the paintings selected from Wichita art students to travel in an exhibition to New York. I still remember watching that film to this day.

“It is ironic that the Arkansas Arts Center recently acquired 290 watercolors and drawings from his estate, making it the second-largest repository of his drawings and paintings in the world. The Arts Center is currently planning a major exhibition of Marin’s works, tentatively scheduled for 2016 or 2017. I’m anxious to see this exhibition.”

In addition to her membership in the Mid-Southern Watercolorists, Fry is also a member of the Fine Arts Center of Hot Springs. She has exhibited her watercolors in various exhibitions in central Arkansas sponsored by the Mid-Southern Watercolorists and at local venues such as the Cantrell Gallery and the Arkansas Repertory Theatre, both in Little Rock. She is included in the Artist’s Book of Arkansas Artists called A Gathering of Artists, published by the Hot Springs Fine Arts Center.