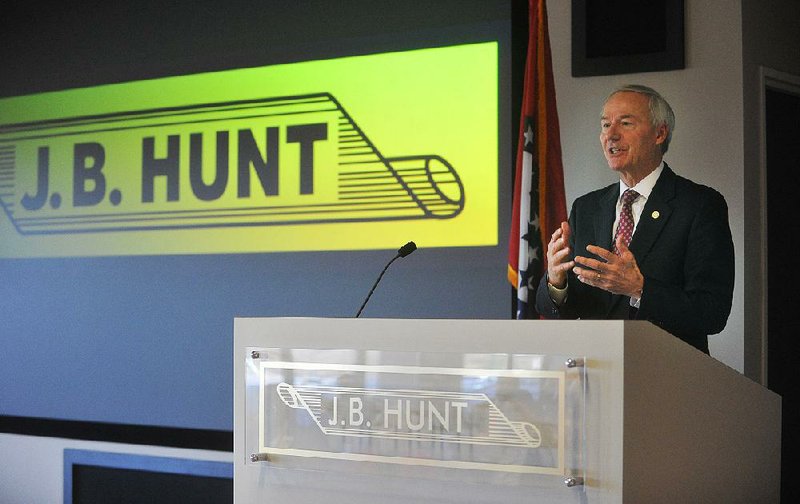 Asa Hutchinson, Governor of Arkansas, speaks during a press conference Wednesday December 9, 2015 at the J.B. Hunt Headquarters in Lowell as officials announce a major expansion to the facility that will create new jobs for the company. ( Michael Woods)

History Commission Chairman Ruth Hawkins of Jonesboro is shown in this photo.

"It's a matter of increasing the visibility of the History Commission and its proper alignment," Hutchinson spokesman J.R. Davis said.

Shifting the History Commission to the Department of Arkansas Heritage would require approval from the Legislature, he said.

Davis said the governor hasn't decided when he'll ask the Legislature to make the move.

"We are still gathering information and details," he said.

Hutchinson said there are a number of key players reviewing the plans for the commission, including officials with the Arkansas Building Authority, the finance department and the commission, and his aide Phyllis Bell.

"Before we ask the Legislature to consider specific changes, it is important to have a long-range plan for the Commission. The History Commission is important, not only from the standpoint of history but also for this generation to be able to easily access that history," the Republican governor said in a written statement.

The fiscal legislative session starts April 13. Also, Hutchinson has talked about calling a special session in April to consider changes in the state's Medicaid program, which includes the private option that uses federal dollars to purchase private health insurance for low-income Arkansans.

Parks and Tourism Department Director Kane Webb, a former spokesman for Hutchinson, said the governor believes that the Department of Arkansas Heritage would be "a better fit" for the History Commission, would increase the commission's visibility and ultimately increase public access to its records.

Through a spokesman, Arkansas Heritage Director Stacy Hurst declined to comment last week on the proposal. History Commission Director Lisa Speer could not be reached for comment for this article.

The History Commission was created by the General Assembly in 1905 to be the official archives of the state, responsible for collecting and preserving the source materials of the history of Arkansas, according to its website.

After becoming a part of the Arkansas Department of Parks and Tourism in 1971, the commission moved to the Multi-Agency Complex Building west of the state Capitol, where it continues to organize and maintain the state and local history of Arkansas by collecting manuscript materials, census records, military records, family histories and various county, state and federal records.

The commission serves more than 14,000 patrons each year, its website says. The commission has a $1.9 million budget in fiscal 2016, and 24 of its 25 authorized positions are filled, said Jake Bleed, a spokesman for the state Department of Finance and Administration.

The Department of Arkansas Heritage was created in 1975 to preserve and promote Arkansas' heritage. It has a $35.1 million budget in fiscal 2016, and 134 of its 152 authorized positions are filled, Bleed said.

The Arkansas Parks and Tourism Department was created in 1971 as part of a reorganization of state government agencies. It manages 52 state parks and promotes the state as a tourist destination for people across the nation. It has a $134.2 million budget in fiscal 2016, and 753 of its 799 authorized positions are filled, Bleed said.

History Commission Chairman Ruth Hawkins of Jonesboro said last week that moving the commission into the Heritage Department "makes a lot of sense."

The Department of Arkansas Heritage "has demonstrated a strong commitment to our history and natural and cultural heritage," and the History Commission "fits as a piece of that," said Hawkins.

For the move to be successful, it will require adequate space for the archives, as well as as room for growth of the archives and "the right temperature and humidity controls" for paper documents, Hawkins said.

She said state officials are searching for the best location for the commission's offices.

History Commission member Robert Sherer of Little Rock said he hasn't heard much about why the governor wants to move the commission to the Heritage Department other than Hutchinson has an emphasis on efficiency in state government.

Sherer said he wondered where the commission's office would be relocated.

History Commission supporters are worried that the commission will be moved into inadequate facilities, according to state records.

Department spokesman Melissa Whitfield said that "as far as I know, no decisions have been made on where anything might move. It's all just discussion at this point."

Hawkins sent an email dated Dec. 10 to Bell, Hurst and Webb that suggested locating the History Commission in the Woodruff House, just east of Interstate 30 and downtown Little Rock.

"Enough land could probably be acquired to build adequate archival space behind (and attached) to the historic building, along with adequate parking spaces," she wrote in her email.

"I get extremely passionate about historic structures that can tell great stories about who we are a state, so disregard all this if I am out of line," Hawkins wrote. "However, I do think it is worth making a trip over there to look at it and think about its potential."

Hurst replied in a Dec. 11 email to Hawkins, Bell and Webb: "Thank you. Ruth. You are not out of line at all."

The Woodruff House was built in 1853 and is at 1017 and 1023 E. Eighth St. The Quapaw Quarter Association bought the former home of William E. Woodruff, founder of the Arkansas Gazette, in December 2014 and hopes to find a new owner for the historic structure.

Hawkins said she hasn't talked with the association about the idea.