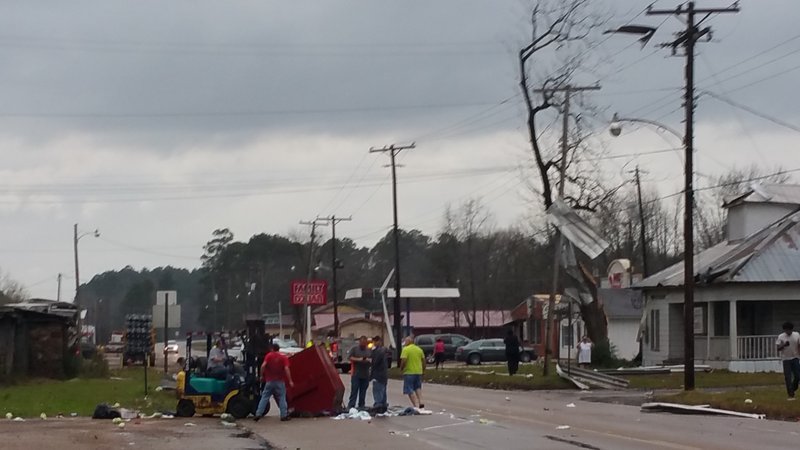 At least four possible tornadoes touched down around Arkansas on Sunday, along with strong winds and large hail, tearing off roofs, uprooting trees and shattering windows.

As of late Sunday, no injuries were reported.

The storm swept into the state Saturday night and continued its path Sunday, after high pressure in the southeastern United States pumped extreme amounts of Gulf moisture into a cold front that had moved into the state, said Joe Goudsward, a meteorologist with the National Weather Service in North Little Rock.

"Look at the date. When it's 80 degrees in December, bad things are going to happen," Goudsward said. "We have an amazingly strong upper-level storm system that kicked out of the Four Corners region and worked its way south in to Texas."

More than 4,000 homes and businesses were without power as the storm system raged across the state.

As of 7 p.m. Sunday about 3,300 Entergy customers were without power, which was the high for the day.

"It will probably get worse before it gets better," said David Lewis, a spokesman for Entergy.

About 972 customers were without power in White County, which was the most in the state. That was followed by Ouachita County with 389 and Lonoke County with 293 customers.

Southwestern Electric Power Company reported 1,021 customers without power Sunday in Little River County. Spokesman Carey Sullivan said crews prepared for the storms before the holidays and were ready to respond.

A possible tornado touched down in Bearden in Ouachita County at 3:50 p.m. Sunday.

Roofs were blown off homes, trees were uprooted and crashed through homes, and storefront windows along Main Street were shattered, according to Ouachita County Sheriff David Norwood.

"It looks like it hit about a four-block area," Norwood said. "The crews are out checking to make sure there are no injuries and that we've got all residents accounted for. We're blocking roads to keep out looters from the stores."

In Calhoun County, a possible tornado touched down about 4:10 p.m. Sunday, hitting a home on Little Bay Road and knocking down trees and strewing debris through the area of Arkansas 278 and Arkansas 274 near Hampton, according to Calhoun County sheriff's office dispatcher Jeannie Green.

The county was sending out search and rescue crews. A freight train at an industrial park was overturned by high winds.

Another possible tornado touched down at 4:30 p.m. Sunday in Fordyce, downing on trees, but no injuries were reported as of late Sunday, according to Dallas County Office of Emergency Management Coordinator Cary Dunn.

"We've got people out there looking to make sure everybody is OK," Dunn said. "So far, we don't know of any injuries or severe damage."

Shortly after 5 p.m. Sunday, strong winds damaged the Hermitage Middle School in Bradley County, blowing out windows, damaging the roof and knocking down a walkway, according to Bradley County Office of Emergency Management Coordinator Robin Scott.

In Searcy, trees were downed, with one crashing onto the steps of the White County Courthouse.

The increased rainfall throughout the day Sunday caused waterways to swell and roads to flood.

Emergency crews throughout the state responded to numerous swift-water rescues -- most from people driving vehicles across flooded roadways, according to Arkansas Office of Emergency Management spokesman Whitney Green.

Conway County first responders had to rescue residents from a mobile home on Turkey Pond Loop north of Morrilton on Sunday, Green said. No injuries were reported.

Yell County Office of Emergency Management Director Jeff Gilkey said rescue crews in the western part of the county had four swift-water rescues Sunday. Three of them were from vehicles stranded on flooded roadways, and one was the rescue of an elderly couple from a flooded home in Bluffton.

"There were no injuries," Gilkey said. "We got lucky. We had a very good response from the assisting agencies."

Gilkey said he is keeping a close watch on river levels and barricading or taping off flooded roads.

"We're just trying to get the message out to not drive through water," Gilkey said. "Turn around. Don't go through it."

Crews had to rescue a driver from a vehicle at Red Bird Lane and Polk County Road 95 near Mena, according to Whitney Green.

"This isn't anything that we weren't expecting," Ort said. "We've gotten long periods of rain. We're definitely keeping an eye on it. People need to use caution. If you can't see the stripes in the road, do not go down that road. You cannot judge the depth. We are just asking people to use a little bit of common sense."

Flooding around the state is expected to continue through Wednesday, even after the rainfall stops, as swollen waterways in Oklahoma flow downstream, according to the National Weather Service in North Little Rock.

The Arkansas River is expected to rise above flood stage, which is 23 feet, by Tuesday morning and continue to rise to near 25.5 feet in Pulaski County by early Wednesday, according to the weather service. 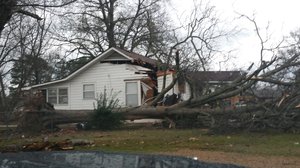 Photo by John Worthen
Downtown Bearden along U.S. 79B.
UPDATE