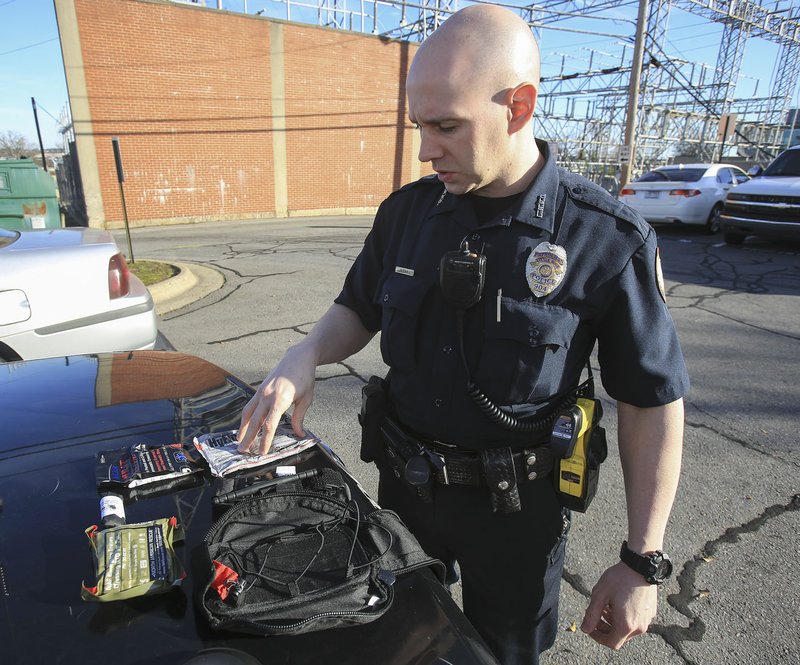 Little Rock police found Jay Taylor in the early morning hours of Sept. 7, lying in the street outside a downtown nightclub suffering from a sucking chest wound. He'd been shot and was minutes away from bleeding to death.

Officers Bryan Morris and Jeremy Palmer quickly covered the wound with an airtight and watertight dressing known as a chest seal. The officers held the dressing in place and applied pressure until Taylor could be taken to UAMS Medical Center for treatment, according to police.

But if the shooting had occurred before March 16, he might not have. That's when Little Rock police equipped each of its 550 sworn officers, from the chief to patrolmen, with emergency medical kits, or blowout packs. The packs contain a tourniquet, hemostatic gauze, pressure bandage, gloves and two chest seals.

The department obtained the packs, which cost about $89 each, through a grant from the Arkansas Trauma System.

The only medical training Little Rock police received before was CPR.

"I think that we're going to see a lot more people saved from officers' actions, holding them and keeping them stable until MEMS arrives," police spokesman officer Richard Hilgeman said. "And it's all going to be directly related to our training and these blowout kits."

The Arkansas Trauma System and MEMS equipped and trained five other central Arkansas police departments this year, as well, in an initiative that began in 2014 by training North Little Rock police and the Faulkner County sheriff's office.

The medical kits and associated training have helped lawmen save at least 25 lives since then, according to MEMS special operations supervisor Maj. Clayton Goddard. The agencies plan to provide the kits and training to every law enforcement agency in the state, Goddard said. Arkansas State Police are next.

Military personnel have received the training, known as tactical combat casualty care, for decades. Nonmilitary personnel became eligible for certification in 2014 after the U.S. Department of Homeland Security recommended in a report that "all first responders are trained on the [emergency medical kits] and hemorrhage control methods."

The report also stated that "the role and importance of bystanders needs to be further recognized, defined and accepted" in mass shootings and acts of terrorism. It suggested that an education campaign with a "memorable catchphrase" -- like "Stop, Drop and Roll" -- be created.

The U.S. launched a campaign called "Stop the Bleed," in October.

Goddard explained the need for such training and awareness simply -- times have changed. He cited the Boston Marathon bombing, in which countless bystanders provided aid to the injured before medical personnel arrived.

"Tactical combat casualty care is the CPR of the '70s," Goddard said.

Arkansas Department of Education spokesman Kimberly Friedman said she and two other department employees completed the training this month through MEMS. She said the department hasn't decided whether additional employees will complete the course.

"You would always hope that you would never have to utilize any emergency plans. But, of course, just about anybody who has a plan would tell you it's probably better to be prepared than not prepared," Friedman said.

About 1,550 Arkansas lawmen have received the training and medical kits.

There are about 16,000 of them working full time in the state, compared with about 3,750 firefighters and fewer than 500 paramedics, according to the Arkansas Department of Emergency Management.

"We need to take on more responsibility because we are first on scene, in most instances," Hilgeman said. "The Fire Department, they can't come into a violent scene. They're big dudes. They're big guys. They've got lots of big tools, but they're not trained to handle violent situations and we don't want to force that on them. And, obviously, the paramedics aren't trained for that."

"It's not safe for medical personnel to come in there," McClanahan said. "So if we encounter a victim who's been shot in the leg and is bleeding severely, we're going to pull out that tourniquet right then. That tourniquet can stay on for 4-8 hours. We can stabilize that patient and move on."

The U.S. Department of Health requires ambulance services to arrive to at least 75 percent of life-threatening calls within 8 minutes, but Goddard said a person in danger of bleeding to death typically requires treatment much faster.

That was the case June 6 outside Park Plaza Mall, when off-duty Little Rock police officers Ahmed Soliman and Joel Alicea-Perichi responded to an attempted suicide north of the building. They reported finding a 47-year-old man lying in a pool of blood. The man had slashed his throat "almost from ear to ear," a police report states.

The officers were equipped with blowout packs, and quickly used hemostatic gauze to slow the bleeding until MEMS arrived and took the man to CHI St. Vincent Infirmary.

Little Rock police training division officer Shawn Bakar, a former MEMS paramedic, said the department devotes a full day of training to the blowout packs. The equipment may not seem like much, he said, but it makes a difference in the right hands -- particularly the tourniquet.

"One of the biggest pieces in that kit is going to be the tourniquet, because the amount of lives that can and have been saved by that are immeasurable," Bakar said.

There are health complications associated with the device, the most common of which are nerve injury and tissue damage.

Gov. Asa Hutchinson in April approved a law that makes first responders, including law enforcement and firemen, immune to civil liability, criminal liability and professional sanctions for using a tourniquet in good faith. The bill was authored by Sen. Jason Rapert, R-Conway.

"The whole idea, it kind of dovetails into our [40 hours of] active shooter training," he said. "Officers are usually the closest ones."