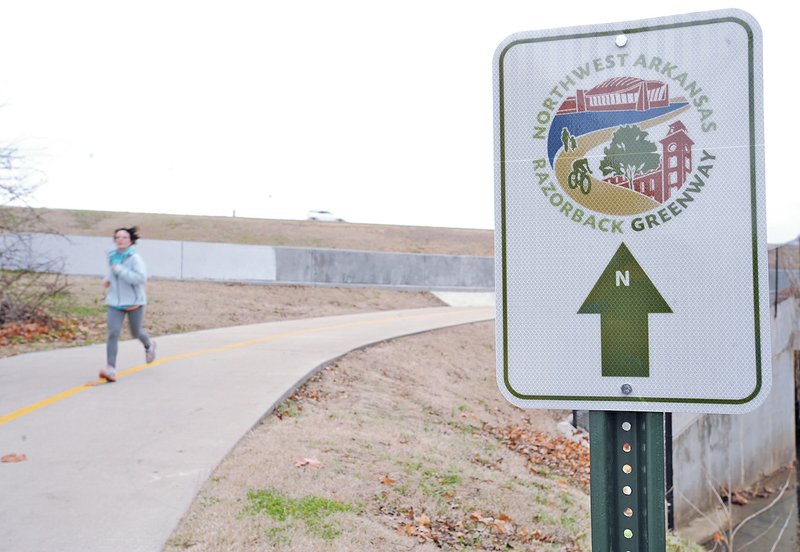 NWA Democrat-Gazette/ANDY SHUPE A runner makes her way south along Fayetteville&#8217;s Scull Creek Trail, a section of the Northwest Arkansas Razorback Greenway, in this Dec. 21 file photo. Officials are looking at early May for the Razorback Greenway ribbon cutting.

A new online map showing all amenities available on the Northwest Arkansas Razorback Greenway and the trail systems of individual cities is set to debut early this month, and officials are looking at early May for the Razorback Greenway ribbon cutting.

"It's substantially complete except for some utilities that are in the way and some traffic signals at Arkansas 264 and Goad Springs Road in Lowell," McLarty said. "The concrete is on the ground, but it's not open yet. They're still working on some landscaping and fencing and putting on the finishing touches."

A dedication ceremony for the trail system is tentatively set for May 2 in Springdale with groups riding or walking to the site from other cities on the trails, McLarty said. Gov. Asa Hutchinson, U.S. Department of Transportation director Anthony Foxx, the region's Congressional delegation and other dignitaries have been invited to attend.

The online trails map will allow users to point and click to find trail heads, restrooms, parking, bus stops, bike ways, bike lanes, bike repair stands and various destinations and amenities on the existing trail systems in the two-county area, according to Paxton Roberts, executive director of the Bike Coalition of the Ozarks, which is managing the project. Sidewalk networks are being added.

"It's gonna be cool. As soon as we can, we want to get it out there," Roberts said. "The goal is to allow users to bike, hike or walk the shared use tails and, also, the natural surface trails. The ultimate goal is to allow people to get out and be more active and use this infrastructure we've developed."

Early focus will be on the Greenway and cities along the Interstate 49 corridor, and trails in outlying towns, cities and recreational areas will be added. The map will be updated quarterly to keep up with additions and changes.

Roberts said the map will put information about trails in one place in an easy to use format, so residents and visitors don't have to search all over for it. It also will have more local data than services like Google.

"It's a regional product," Roberts said "This is going to navigate across city borders."

The project is a collaboration between the Bike Coalition of the Ozarks, the Northwest Arkansas Council, Regional Planning and the Center for Advanced Spatial Studies at the University of Arkansas. It was initiated by the Endeavour Foundation as part of its Energize the Ozarks initiative. A Walton Family Foundation Grant helped pay for the project.

Cities along the Razorback Greenway are being asked to cooperate with regional planning in a "mile marker project," similar to the wayfinder project that put uniform wayfinding signs up in seven of the region's cities. Those wayfinding signs direct visitors to various areas or attractions in a city, from shopping areas to sports fields to downtown.

The signs on the trails will allow users to know where they are and how far they've travelled, McLarty said. The markers will begin in south Fayetteville where the Greenway meets Town Branch Trail, south of Walker Park.

If Bentonville, Fayetteville, Johnson, Lowell, Rogers and Springdale agree to participate, regional planning will have 37 signs made and installed between Walker Park in south Fayetteville and Lake Bella Vista. The project is estimated to cost about $60,000 and each municipality will pay a pro-rated share, depending on how many signs are installed in their city.

Cities also are in the process of adopting individual bike and pedestrian plans. Regional planners are asking city councils in 25 municipalities to approve plans and endorse the regional Northwest Arkansas Bike and Pedestrian Master Plan developed by Alta Planning+Design.

Every city in the two-county area with a population of more than 1,000 gets an individual strategy. After approval, regional planners will begin to look for grants and other ways to pay for projects.

"We're offering you a professional document from a nationally recognized planning firm and we want you to take it and customize it to your city's needs," McLarty said.

So far, Bella Vista, Pea Ridge, Lowell, Siloam Springs and Tontitown have approved individualized plans. Fayetteville has endorsed the regional plan and, along with the other major cities in the region, is updating its existing trails plan with the new information.

The process was on display Monday evening in Greenland where about 75 people showed up to see where the plan called for trails to go in their city. Several residents were concerned about the route to connect Greenland with Fayetteville's new regional park, the Mt. Kessler area and Fayetteville's trail system. Mayor Bill Groom said that's just part of the process.

"This is only a plan, if it needs to change then we'll change it," Groom said. "This is all citizen driven and if they say no, we'll go another way. It's part of the process and it'll be neat when we get it done."

Regional planners have revised the map with adjustments based on comments received. The Greenland Planning Commission will see the plan tonight and another public input session is set for 6 p.m. Thursday at the community center. Groom hopes to see the plan go to the city council in March.

Regional planning eventually will adopt the overall bike and pedestrian plan as part of the long-range Northwest Arkansas Regional Transportation Plan. A $300,000 grant from the Walton Family Foundation paid for the work. More than 800 residents participated during 31 public input meetings.

In addition to the bike and pedestrian plan, Greenland recently got a $100,000 Blue Cross and Blue Shield Grant that was earmarked to build a 1,700 foot trail around a small city park and to buy exercise equipment, Groom said. He'd eventually like to see the city's parks, downtown and recreational areas connected by trails and possibly a trail going to an area along the West Fork of the White River. Connecting with West Fork, to the south, also is a goal.