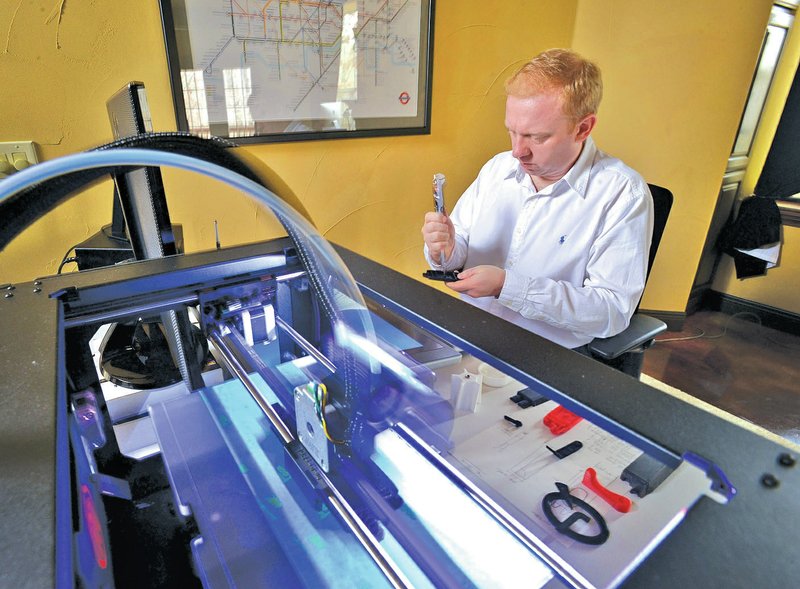 NWA Democrat-Gazette/BEN GOFF Will Boswell, CEO of Taylor Boswell, checks the measurements of a printed part Thursday as his MakerBot Replicator 2 3D printer fabricates a component at his home office in Bentonville. Boswell&#8217;s business provides prototyping and other creative services for businesses and entrepreneurs.

3D printing is available throughout Northwest Arkansas, but the technology attracts more businesses than individual consumers for now.

Local businesses hope offering 3D printing will help them stay ahead of the competition. Many three-dimensional products produced locally include prototypes, models and small product runs, but business owners say the sky is the limit.

These are the major industries that use 3D printing:

Will Boswell, CEO and founder of design firm Taylor Boswell in Bentonville, said he completes 3D print jobs for a variety of businesses from manufacturers to entrepreneurs. His firm used to design the projects and send them elsewhere to be printed, but brought the process in-house last year. He's thinking about buying another printer.

"This one has paid for itself," he said, pointing to the Makerbot Replicator 2 sitting on his desk. He purchased the printer for about $2,700 last year.

Chris Walker uses a Makerbot at Kopykat 3D Printing that he said cost about $4,000. He started his Fayetteville business about 15 months ago.

This printer model uses spools of renewable bioplastic that it pulls through a tube and into an extruder. Some printers use other products such as rubber, paper or food.

The filament is heated and pushed through a small hole, onto the build plate. The printer creates the product by following a design pattern by using multiple layers of the material.

The use of 3D printing has expanded over the past 30 years, and industry experts expect that growth to accelerate over the next three years because of rapid technological development, falling costs and new applications for the process.

Printer prices have come down, but vary greatly. IBISWorld reports many commercial 3D printers start about $15,000 and quickly rise into six figures. Some manufacturers are producing consumer models for home use for less than $1,000. Sam's Club listed on its website a Cube 3D Printer for $998.

Boswell said while the price is making printers more affordable, most people still aren't ready to have one in their home. He predicted some day they will be just another household staple.

"3D printers are now accessible, but the missing part is not everyone can design," he said. "The software alone I use cost $5,000, and then you have to learn how to use it."

People who don't want to design their own products can purchase and download designs from several websites such as Thingiverse.

Boswell said one day people may be able to go to an automakers website, download a part that needs to be replaced on their vehicle, print it out and replace it.

He recently designed and printed a part that connected his sander to his vacuum.

"I could have used duct tape or tried to find something that would work at a store, but this was just easier to do," he said.

All of Jordan McDowell's 3D printing are original designs. She is a CAD designer and technician at H Perry's Jewelers in Fayetteville. The jeweler started using 3D printed models about a year ago.

"The technology allows us to be a lot more specific in the design," she said. "The customer can see how it looks before we make it and make any revisions."

She said 3D printing and design account for about 30 percent of the custom process, with the majority of the work still being completed by jewelers at the bench.

McDowell is also a customer. She designed her own engagement ring, printed a 3D model, reviewed it and made some minor changes.

"I could see how it looked on my hand and decide if I wanted a piece higher or lower," she said.

Walker would like to see his business expand into more consumer-oriented products; most of his work is in creating prototypes.

"Business is slower than I expected. I thought I would be really busy right away, but it just hasn't caught on yet," he said.

He pointed to personalized wedding cake toppers as a perfect job for a 3D printer.

Wal-Mart teamed with Hasbro and Disney in September for a project that created personalized 3D action figures. The retailer used a printing company called 3DPlusMe for the weeklong event at 10 stores across the country.

Boswell said he can make parts or prototypes for small companies and entrepreneurs at a faction of the cost of using injection molding.

"It also allows people to experiment more and it's a quicker process," he said.

The price of 3D printing works for small runs, but would not be cost effective for a large run. Items all cost the same when printing a 3D product no matter how many are being printed, unlike injection molding that typically is cheaper per piece as runs get larger.

Boswell said clients can touch and feel a product and make changes before sending it into production. He sends his customers the files once a project is complete so it can be added to an existing model or mass produced.

Boswell has worked with Norwalk, a manufacturer of a hydraulic press juicer in Bentonville.

Carol Witte, president of Norwalk, said the company is in the preliminary stages of testing 3D printing. She said it could cut manufacturing costs, but only works if it doesn't interfere with a product's quality.

"This may be the answer to the future of manufacturing parts," she said. "We don't know that yet."

Christie Swanson can be reached by email at cswanson@nwadg.com or on Twitter @NWAChristie.