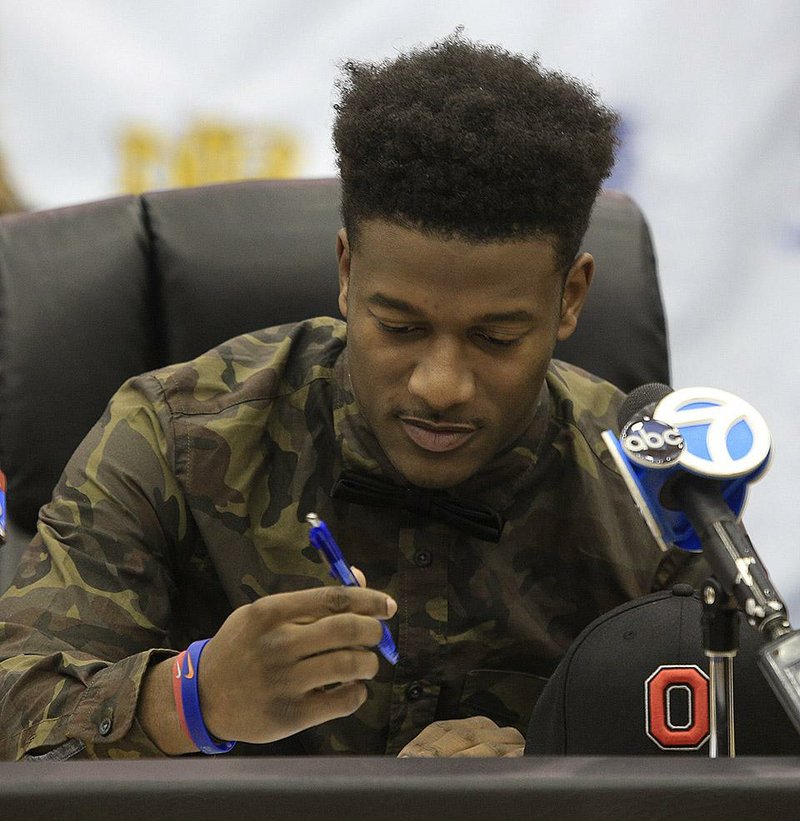 A North Little Rock High School football staff member gave a $600 check from an outside booster organization to the stepfather of highly recruited wide receiver K.J. Hill in 2013 that led to a forfeiture of a boys basketball state championship, documents obtained Friday by the Arkansas Democrat-Gazette show.

The check was made out to Montez Peterson, Hill’s stepfather, and signed by a member of the NLR Athletic Foundation, a private booster group that has purchased equipment for the football team.

The check was dated Feb. 7, 2013, and according to a handwritten letter signed by Peterson, North Little Rock head football coach Brad Bolding gave him the check that month — prior to Hill’s enrollment at North Little Rock High School.

The check was cited in the one-page letter the North Little Rock School District provided to the Arkansas Activities Association on Thursday that led to the forfeiture of 10 football games and at least 24 boys basketball games from the 2013-2014 academic year. The school also gave up the boys basketball state championship.

The letters and a copy of the check were included in documents obtained by the Democrat-Gazette from the AAA as was a second letter from Peterson that says the check was for football expenses he incurred as a football team volunteer.

The documents identify Peterson but they do not refer to Hill by name.

Attorney David Couch, who represents both Bolding and the NLR Athletic Foundation, disputed the district's version of events Friday.

“This is the same thing in the letter, and I can disprove all those allegations. There’s no doubt that the check exists,” Couch said. “The person who took the check — it was for reimbursing for expenses. I have invoices to back it up.”

In the district’s letter, North Little Rock Athletic Director Gary Davis said that the district learned of the “potential violations” on Jan. 26, and “no current or former District administrators had any prior knowledge of the violations.”

Davis said that a district internal investigation led the district to determine that a “high school football staff member employed by the District (a) gave a check … written on the bank account of an outside booster organization in the sum of $600.00 dated February 7, 2013, to the student’s step-father; and (b) made improper contact with the Student’s step-father.”

The district provided to the AAA a handwritten letter signed by Peterson. But in a second letter dated two days later Peterson disputes the account given in his first signed letter.

In the handwritten letter dated Jan. 26, Peterson writes that the check was for expenses for an out-of-state football camp.

But in a typed letter dated two days later, Peterson said the money wasn’t for the camp expenses. Instead, he said, he remembered the money being for expenses he incurred while assisting the football team.

According to a copy of the check included in the documents submitted to AAA, it was signed by Billy C. Starks, who is listed as the president of the NLR Athletic Foundation on filings with the Arkansas Secretary of State’s office.