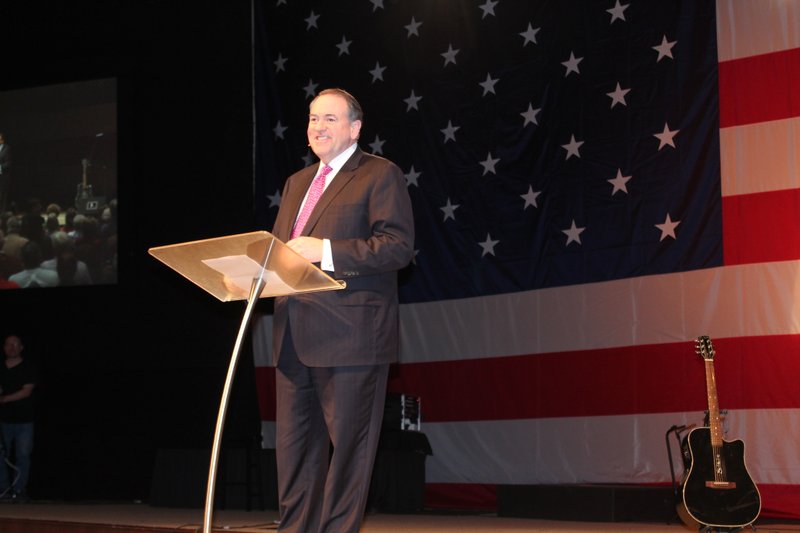 Huckabee presented his nationwide simulcast, America from Ordinary to Extraordinary and signed copies of God, Guns, Grits and Gravy, the New York Times bestselling author’s 12th book, at the Church at Rock Creek in Little Rock.

Country music boomed through speakers as about 800 supporters filed into the venue to hear the Hope native, who served as governor from 1996 to 2007, speak.

“This isn’t about politics,” he said, standing in front of an enormous American flag backdrop with the works faith, love and hope projected on it.

God, Guns, Grits and Gravy is Huckabee’s assessment of America’s cultural division and is considered to be an appeal to the conservative crowd.

Much of his presentation centered on what he said the goal of his book is: to bring encouragement to people who live in “flyover country."

Traditional conservative values and free speech are no longer revered in today’s culture, he said.

“Once there was a time in America when we were encouraged to speak freely,” he said. But now, if you speak too freely and your speech comes from the perspective of faith, “you can’t expect to be applauded for that,” he said.

“In today’s world what real love means is interpreted as hate. If you tell someone what the truth is you will be accused of hate speech,” he said. “Craziest thing I’ve ever heard — Christian groups that I know and I know the people involved in are called hate groups.”

The potential GOP presidential contender went on to talk about businesses who he said have been targeted because of their beliefs.

“We’re abandoning the basic concept of free speech and liberty. If you’re a believer and believe old-fashioned things — like the definition of life and the definition of marriage, it’s possible the government will put you out of business,” he said. “They have in numerous occasions.”

He cited the New Mexico based Elane Photography and Sweet Cakes by Melissa bakery in Oregon. Both businesses turned down requests to contribute their services to lesbian couples.

“They’re out of business. They face jail time and $150,000 or more in fines because they wanted to run their business as Christians, and they were targeted,” he said.

With his eye on a presidential run, his book tour, which kicked off in Iowa, has generated extra hype for him and a chance to assess the political landscape.

The winner of the 2008 Iowa Republican caucuses hasn’t formally announced his candidacy, but he has dropped hints he’s pondering a second presidential bid.

In January, he stepped down from his Fox News talk show he hosted for more than six years to gauge political and financial support for a presidential campaign. He recently made an appearance at the Iowa Freedom Summit along with a parade of several other prospective Republican candidates in an effort to win over the party’s base. His recent comments criticizing popular culture — he’s weighed in on Beyoncé as well as the Obamas’ parenting — have also drawn national attention.

He’s expected to make an official announcement about a potential presidential bid later this spring.