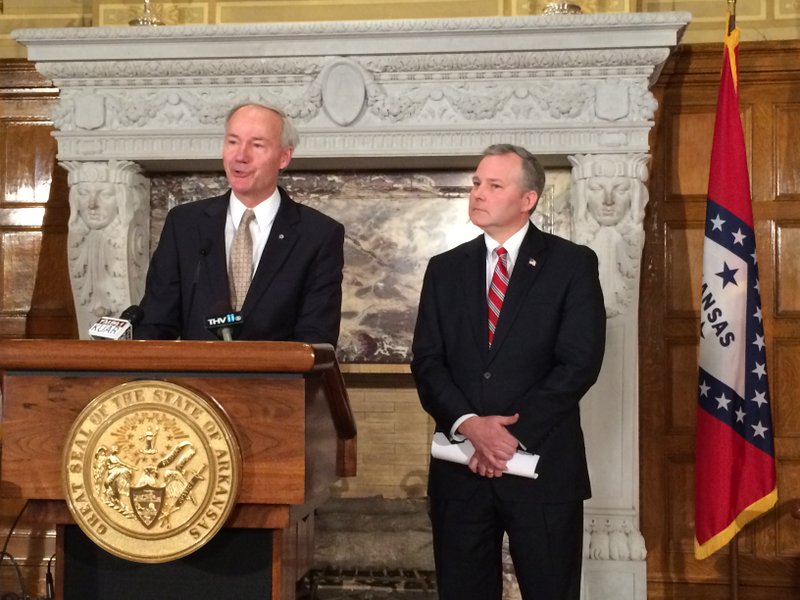 Gov. Asa Hutchinson, along with Lt. Gov. Tim Griffin, announced the creation of the Governor's Council on Common Core Review on Wednesday.

Gov. Asa Hutchinson announced Wednesday the creation of a task force to review Common Core that will be helmed by Lt. Gov. Tim Griffin.

The governor said the creation of the Governor's Council on Common Core Review fulfills one of his campaign promises to address growing concerns about Common Core, a set of common math and English standards adopted by most of the 50 states.

"This is one of the topics in the last several years that has created controversy not just in Arkansas, but nationally," Hutchinson said at a news conference. "I said during the campaign that as governor, I would be open minded on topic but there does need to be review on Common Core standards."

Several legislators have been working on bills that would address growing dissatisfaction over Common Core, including repealing the standards or altering them significantly, the Arkansas Democrat-Gazette previously reported.

"There have been a lot of questions raised, and there's a lack of confidence in [Common Core standards] and concern about the testing side, but we're not here to prejudge what's been done," Hutchinson said. "The council will review where we are, where we need to go. This is not preordained; this is a listening opportunity."

One of the bills, sponsored by Rep. Mark Lowery, R-Maumelle, would discontinue use of the Partnership for Assessment of Readiness for College and Careers exams that are administered in grades three through 11.

Hutchinson said this council would not provide feedback quick enough to affect the outcome of the testing for this school year.

The council will be composed of 16 members, including educators, parents, business leaders and students appointed by the governor.

Hutchinson said he expects the council to make recommendations on education standards, implementation of those standards, local flexibility and student assessments and student data privacy.

Online applications for the committee will be accepted through next Friday at governor.arkansas.gov. Hutchinson will announce the members early next month.