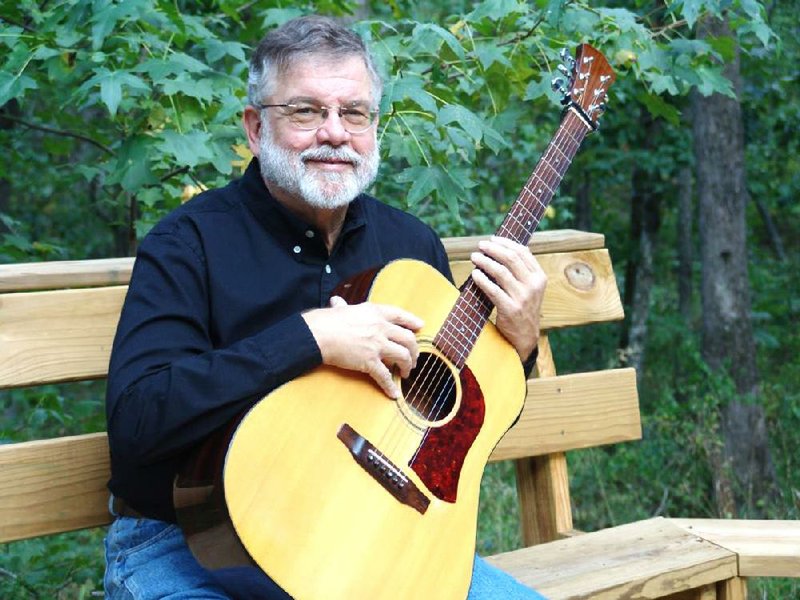 The musicians of Mountain View are noted for the Arkansas Folk Festival each April and the year-round gatherings in and around the Stone County Courthouse. Some music fans might even conclude that they seldom feel the need to leave their tranquil surroundings.

This weekend will be a rare exception, when four of them hit the road for a rare performance in central Arkansas.

When it comes to music about Arkansas, made by Arkansans, it doesn't get any more authentic than Charley Sandage and Harmony, who have been performing original songs around Mountain View for nigh onto a coon's age -- at least in musicians' time.

Sandage serves as a sort of narrator and Harmony is a trio comprising of Mary and Robert Gillihan and Dave Smith. The group's instruments include fiddle, banjo, guitar, mandolin, autoharp, bass, button accordion, harmonica, pickin' bow and spoons.

"The upright bass stays in one place and the Harmony folks swap out on who plays what," Sandage says. "It's a lot like musical chairs, with them sliding around, and the songs are little stories I came up with about the fascinating aspects of our state's history."

Some of the song topics have been the Bayou Bartholomew, the oil boom in Smackover, desegregation in Hoxie, the coming of the railroad along the White River, the surveying of land, Arkansas Post and how U.S. 67 played a part in rock 'n' roll's development.

Sandage, who was born in Malvern and grew up in nearby Donaldson, has had a career as a history teacher and school administrator and even served a stint as the program director of the Ozark Folk Center, just north of Mountain View, when it opened in the mid-1970s. He later worked at AETN in Conway while still living in Mountain View.

"That was a time of commuting two hours each way to my job, and I resolved to make good use of the driving time," Sandage says. "I had a little tape recorder and when I'd come up with what I thought would be a possible song I'd turn it on and when I got home, I'd add the music. At that time Tom Dillard, who has a Sunday column in the Democrat-Gazette, was the archivist at the University of Central Arkansas, where AETN is situated.

"I'd run into Tom frequently there, and I'd say, 'Hey, Tom, what's a good story?' and he'd pass along a lot of tips. I would get interested in a story, do some research and then while I was driving, I'd be thinking about it and come up with the songs. Some of them are done tongue-in-cheek, but I try to be accurate in the stories I'm telling."

By 1999, Sandage and Harmony had begun recording the stories. So far they have three main volumes, titled Charley Sandage's Arkansas Stories Volume One, Two and Three. There's also Charley Sandage's Arkansas Stories for Young Children: The Big Bear and Harmony. (On the latter, Sandage takes on the persona of a friendly talking bear, who tells stories to some children he encounters in the woods.)

"I think I'd known the folks in the trio, Harmony, for some 15 years before I approached them about singing these songs I'd come up with," Sandage says. "They do a lot of shows at the folk center and elsewhere."

Harmony first got together in 1988 when the three musicians, not yet formally a trio, were invited by the Arkansas Department of Parks and Tourism to represent Arkansas at a convention of travel writers in Kansas City. Smith had moved to Stone County in 1972 after falling under the spell of the music he heard in the tiny community of Fox. Gillihan was reared in the Ozarks and began singing in church when he was 8 years old. Mary Gillihan, from eastern Illinois, visited Mountain View in 1973 and decided to move there. The three have made their own recordings, as well as some with Sandage.

"They are just great musical storytellers," Sandage says. "And their musical versatility is just as impressive."

The show is a presentation by Arkansas Sounds, a project of the Butler Center for Arkansas Studies, where Sandage has done much of his research since it opened. When the Ron Robinson Theater was being developed, Sandage was invited with Harmony to perform there when their schedules permitted.