No course set yet for LR district, state says 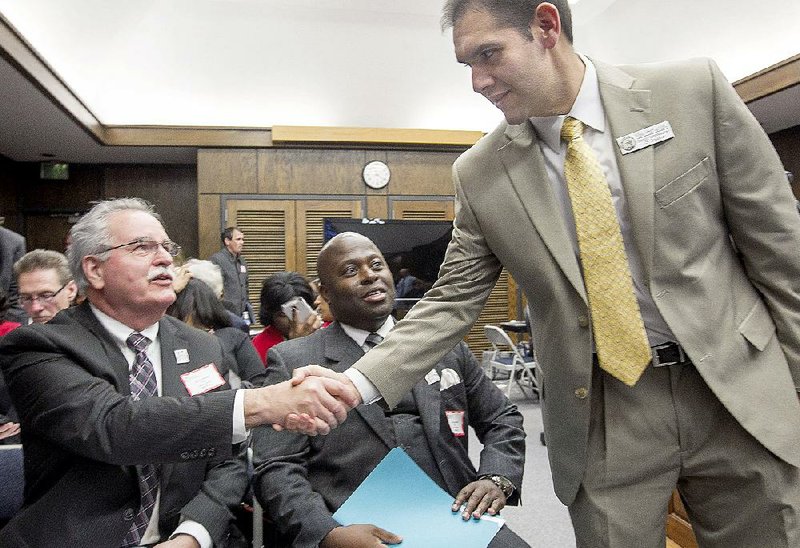 Arkansas Education Department leaders reported Thursday that there is no plan yet for improving the Little Rock School District's academically troubled schools.

But they said state and district staff members are working on it, along with forming citizen committees and planning for budgets, audits, technology and improved facilities.

State Education Commissioner Tony Wood and Deputy Commissioner Mike Hernandez provided the first of what will be monthly updates to the state Board of Education on their work with the 24,800-student Little Rock district.

The Education Board voted 5-4 just over two weeks ago to take control of the state's largest district by removing the seven-member School Board and retaining Superintendent Dexter Suggs on an interim basis under the direction of Wood.

The state board action was the result of the district having six of its 48 schools classified by the state last year as academically distressed, meaning that fewer than half of the students at the schools scored at proficient levels on state math and literacy exams over a three-year period.

Wood said Thursday that he and the state agency staff "are trying to work from within and support the leadership of the administration in the Little Rock School District to do what is in the best interest of those children."

He described the approach as being the best given the set of facts and the scope of the work to be done.

"It's going to take time to see the results of that and/or the lack of results," he said.

"We're making progress, but it's not something that will dramatically occur over a 30-day period or a six-month period," Wood said, adding that the size of the district complicates seemingly simple changes.

For example, he said the Education Department will ask the Bureau of Legislative Audit to do an annual audit of the Little Rock district just as it does for most other districts in the state. That will result in a significant increase in the workload for the bureau, he said. Previously the Little Rock district contracted with a local accounting firm to do the annual audit that was then submitted to the state.

Similarly, converting the district's financial and student record keeping to the Arkansas Public School Computer Network will take at the minimum the entire 2015-16 school year to train Little Rock district staff members to make the transition and at least three new positions in the Education Department to provide the service and support. The Little Rock district is the only district not directly tied into the network.

In response to Education Board member Alice Mahony of El Dorado about the existence of a plan for raising achievement at the six schools classified as academically distressed, Wood said, "We are in the process of developing that -- without any question.

"We are not prepared today to provide a book that has chapters A, B and C that is specific to these general areas whether it be school improvement for the six academically distressed schools," he said, "but that effort is ongoing."

Hernandez said those plans will include scheduling, staffing and budgeting as well as timelines for accomplishing tasks.

He said in an interview later that decisions on the possible reconstituting of the staffs at the six academically distressed schools and converting college-style block schedules now used at middle and high schools to the traditional seven-period day have not been finalized. Reconstituting schools calls for vacating all the positions at a school and inviting applications to fill the jobs.

In voting to take control of the district, the Education Board last month also called for the formation of a civic community to capitalize on the community interest shown in the school district.

Hernandez said Thursday that applications are now being sought for membership on the new civic advisory committee that will meet 5-6 p.m. on the third Tuesday of each month. The committee will review the progress of the school district toward meeting goals necessary for release of the district from state control. District staff members will present data to the committee. The committee will make recommendations on information to be widely communicated to the stakeholders in the district.

The application form is on the school district's website: lrsd.org.

The applications, due by noon Feb. 20, ask whether an applicant is a registered voter, a registered lobbyist, a school district employee, or a benefactor of a contract with the district. The applications also ask applicants to name their state senators and representatives, to give their work histories and their previous memberships on school board or other elected offices. The applicants are further asked whether they are willing to make themselves available for training provided by the Education Department and they are asked for three in-state references.

Additionally, the principals at each of the six academically distressed schools -- Baseline Elementary; Henderson and Cloverdale middle schools; and J.A. Fair, Hall and McClellan high schools -- will select two teachers and two students for the committee.

Wood said the financial foundation of the district has to be a concern along with academics in the district.

"Regardless of the success that is hoped and planned for in regard to academic achievement, the financial position of the district is one ... that is our responsibility to carefully assess," he said.

Hernandez said the state is forming a budget planning committee to project the district's revenue and expenditures over the next five years and to develop a plan for accommodating the loss of state desegregation aid to the district.

The district receives about $37 million a year in that special aid. That will end after the 2017-18 school year, as the result of a January 2014 settlement agreement between the state, the Pulaski County school districts and the Joshua intervenors who represent black students in the three districts in a three-decades old federal school desegregation lawsuit.

The Little Rock School Board had last year invited community members to apply to participate on a financial advisory committee and, while 28 people responded, the group never met, Wood said. Now a smaller group will be convened, Wood said. He will meet next week with "a leading business person in the community" who he expects to spearhead the group that is expected to deal with specific tasks that Wood has in mind.

Other planning to be done will center on making improvements to school facilities and the district's instructional technology systems, Hernandez said.

The locally elected School Board last month identified a list of building priorities that included a new high school in southwest Little Rock and a new middle school in west Little Rock. The board had talked of proposing a tax increase at a special election to be held by February 2016, the funds from which would finance the construction plans.

Education Board member Mireya Reith of Fayetteville voiced concern about the cancellation this week of a public forum at Chicot Elementary and urged that Suggs, the district superintendent, proceed with plans to hold community forums.

I know this has been an intense couple of weeks," Reith said."I want to express my gratitude to everyone for all the hard work everyone is putting in. As they say, you can't roll up your sleeves and wring your hands at the same time. It's been wonderful seeing everyone roll up their sleeves."