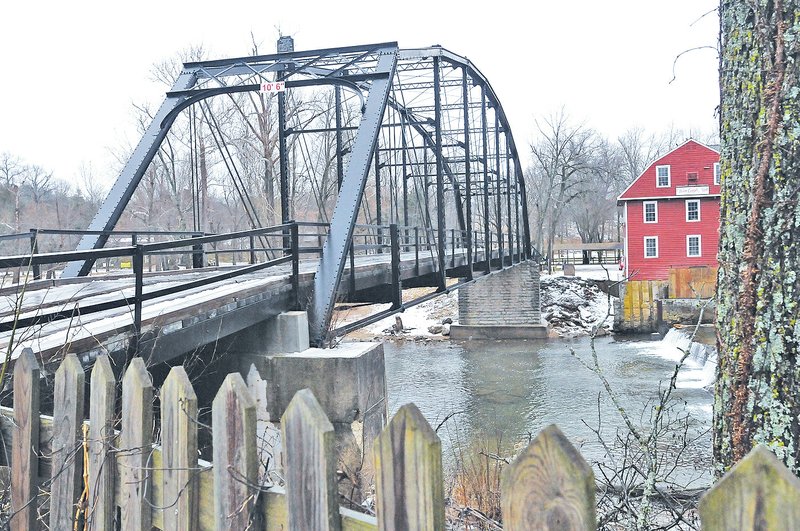 BENTONVILLE -- County Judge Bob Clinard says his first priority is to try to save the historic War Eagle Bridge in eastern Benton County.

"The majority of the people I've talked to from that area or who are interested in the bridge and in the area certainly are interested in rehabilitating the bridge," Clinard said. "I'm going to put together a program to get a cost estimate for that."

Clinard will seek some assurance from the state that any new repairs to the bridge will bring it up to standards for a period of some years. Glenn Jones, chairman of the Benton County Historical Preservation Commission, said he's skeptical the state will offer any such guarantees.

Danny Straessle, spokesman for the Highway Department, said the state won't guarantee the future status of the bridge. The state performs inspections on bridges in Arkansas, but War Eagle Bridge is owned by Benton County and the decision on what to do with the bridge, whether to repair it and keep it open or possibly to close the bridge, will be made by county officials not by the Highway Department, Straessle said.

"That's really not the way it works," Straessle said. "All we do is inspect it. We're required by law to inspect all the bridges in the state because we have the only bridge inspector."

Bridges are inspected on 12-month or 24-month cycles, unless serious deficiencies have been found that require more frequent inspections, Straessle said. Any future reports will reflect the status of the bridge at the time of the inspection, he said.

"If repairs are made our inspector will go back at the appropriate time and rerate the bridge," he said.

Jones said he's pleased the county is interested in trying to rehabilitate the old bridge, but recent experience with other bridges in the county have left him cautious.

"I'm thrilled the county judge is going to look at rehabbing the bridge," he said. "But we lost two bridges in Benton County -- Fisher Ford and Colonel Meyers -- and it could easily happen again. The county could invest $1 million or more bringing this bridge up to the Highway Department standards only to be told there are other deficiencies."

The county needs to keep the option alive to build a bypass for the War Eagle Bridge at the same time rehabilitation work is being examined, Jones said. That way, the bridge can be kept in place and its destruction won't be required in the replacement process, he said.

"Anybody who knows anything about War Eagle knows how important it is to Benton County," he said. "I will do my job to support whatever it takes to preserve the bridge. But that's a battle I fought and lost with the Highway Department over Fisher Ford and Colonel Meyers bridges. All I had to do was have enough money. The state said to me 'Glenn, you can have the bridge, but you've got to move it.' They beat me on that. It's all about the money."