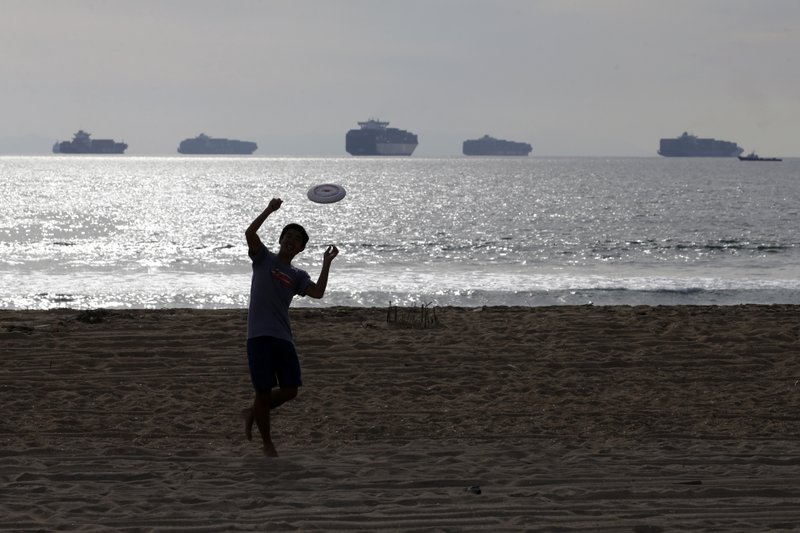 Micah Young catches a frisbee on the beach Friday, Feb. 20, 2015, in Sunset Beach, Calif., as loaded cargo ships are anchored outside the Ports of Long Beach and Los Angeles. Billions of dollars of cargo are sitting on dozens of massive ships anchored outside West Coast ports. They cannot dock because of historically bad cargo bottlenecks at 29 ports that handle about $1 trillion of trade annually, much of it with Asia.

LOS ANGELES -- Dockworkers along the West Coast began the months-long task Saturday of clearing seaports of cargo that was caught up in a contract feud between their union and employers.

Parked off the Southern California coast is an armada of ships bulging with containers holding goods that would already be on store shelves, but for a labor dispute that has disrupted international trade.

The volume of cargo that West Coast dockworkers and their employers must clear, now that they've reached a tentative contract agreement Friday evening, is staggering. Put in a line, the containers would stretch 579 miles; stacked up, they'd rise nearly 250 miles -- about the orbiting altitude of the International Space Station.

And those are just the ships waiting for dock space at the ports of Los Angeles and Long Beach. There are smaller, though substantial, backups in San Francisco Bay and Washington's Puget Sound. The smaller Port of Oakland estimated it would take up to eight weeks to recover.

With labor peace restored to the West Coast waterfront, dockworkers did something Saturday evening that they have not for weeks -- got to work loading and unloading the oceangoing vessels.

In recent weeks, companies that operate marine terminals cut night, weekend and holiday shifts -- saying they did not want to pay overtime for what amounted to a "strike with pay." That was a reference to what they said was a worker slowdown that began in November. The union said longshoremen were abiding by all safety rules.

The two sides have a history of conflict that dates to the killing of striking dockworkers during the Great Depression.

While the ports never shut down fully, the problems in the supply chain were acute -- and growing. West Coast ports handle about $1 trillion worth of cargo annually.

The contract deal will, eventually, restore the free flow of cargo across docks at 29 seaports that handle about one-quarter of U.S. international trade.

It will take several months for ports such as Los Angeles and Long Beach -- the nation's largest -- to clear the backlog.

On Saturday, the leader of the Port of Los Angeles estimated that it would take three months "to get back a sense of normalcy." While there are about 30 ships just off the coast, there are perhaps two dozen more hanging beyond the horizon and still more slogging across the Pacific, executive director Gene Seroka said.

Seroka said he was drawing up a detailed plan for which ships get priority, with a preference for those carrying perishables such as produce, serving U.S. military bases on the Pacific Rim or carrying autos and goods for major retailers.

"The sense of urgency in the industry right now is as good as I've ever seen it," Seroka said of both sides willingness to speed cargo into the stream of commerce.

On Saturday morning, smaller work crews were preparing dockside yards for a return to bigger crews in the evening. The contract was settled too late Friday to order day crane crews to load and unload ships. In the late afternoon, larger crews gathered at the hiring halls where many longshoremen get their work assignments -- though as a ramp-up back to night work, Los Angeles and Long Beach were not yet operating at full capacity.

"I suspect that people will be getting a lot of overtime in the days ahead," said U.S. Labor Secretary Thomas Perez, whom President Obama dispatched to San Francisco last week to push negotiators to a resolution after nine months of bargaining.

The tentative contract still must be approved by the 13,000-member International Longshore and Warehouse Union's rank and file, as well as the full Pacific Maritime Association of employers.

A vote by union members could come in April. It was not immediately clear when employers would vote.

Neither side released details, but in a recent letter, maritime association President James McKenna outlined what he called employers' "last, best and final" offer. It included maintenance of nearly no-cost health coverage, an $11,000 increase in the maximum pension benefit to $91,000, and a $1-per-hour wage increase over each of the five years.

Though dockworker wages vary by job and skill level, the average exceeds $50 per hour, according to the maritime association, which represents ocean-going shipping lines and the companies that load and unload cargo at port terminals.

The union's power revolves around several things that founding father Harry Bridges enshrined both in its culture and its contract with employers. First, that contract covers all West Coast ports -- if dockworkers want to gain leverage by slowing the flow of cargo, shipping lines have no easy alternatives. Second, the union controls job assignments, partly through hiring halls in each port area.