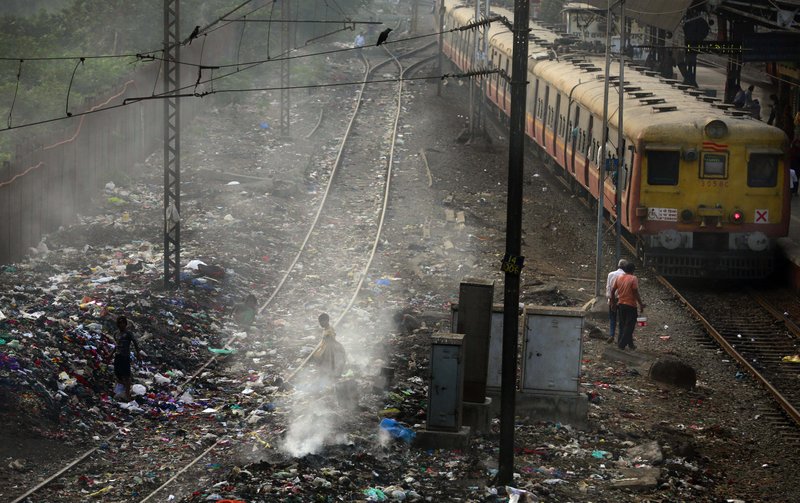 In this Monday, Jan 26, 2015 file photo, a local train moves past burning garbage at a local train station in Mumbai, India. Indias filthy air is cutting 660 million lives short by about three years, while nearly all of the countrys 1.2 billion citizens are breathing in harmful pollution levels, according to research published Saturday, Feb. 21, 2014. While New Delhi last year earned the dubious title of being the worlds most polluted city, the problem extends nationwide, with 13 Indian cities now on the World Health Organizations list of the 20 most polluted.

NEW DELHI -- India's filthy air is cutting 660 million lives short by about three years, according to research published Saturday that underlines the hidden costs of the country's heavy reliance on fossil fuels to power its economic growth with little regard for the environment.

While New Delhi last year earned the title of being the world's most polluted city, India's air pollution problem is extensive, with 13 Indian cities now on the World Health Organization's list of the 20 most-polluted.

That nationwide pollution burden is estimated to be costing more than half of India's population at least 3.2 years of their lives, according to the study, led by Michael Greenstone of the University of Chicago and involving environmental economists from Harvard and Yale universities. It estimates that 99.5 percent of India's 1.2 billion people are breathing in pollution levels above what the WHO deems as safe.

"The extent of the problem is actually much larger than what we normally understand," said one of the study's co-authors, Anant Sudarshan, the India director of the Energy Policy Institute of Chicago. "We think of it as an urban problem, but the rural dimension has been ignored."

Added up, those lost years come to 2.1 billion for the entire nation, the study says.

While "the conventional definition of growth has ignored the health consequences of air pollution, this study demonstrates that air pollution retards growth by causing people to die prematurely," Greenstone said in a statement.

For the study, published in Economic & Political Weekly, the authors borrowed from their previous work in China, where they determined that life expectancy dropped by three years for every 100 micrograms of fine particulate matter, called PM2.5, above safe levels. PM2.5 is of especially great health concern because, with diameters no greater than 2.5 micrometers, the particles are small enough to penetrate deep into the lungs.

The authors note that their estimations may be too conservative because they're based in part on 2012 satellite data that tend to underestimate PM2.5 levels. Meanwhile, India sets permissible PM2.5 levels at 40 micrograms per cubic meter, twice the WHO's safe level.

India has a sparse system for monitoring air quality, with sensors installed in only a few cities and almost unheard of in the countryside. Yet rural air pollution remains high thanks to industrial plants, poor fuel standards, extensive garbage burning and a heavy reliance on diesel for electricity generation in areas not connected to the power grid. Wind patterns also push the pollution onto the plains below the Himalayan mountain range.

Sarath Guttikunda of the independent air quality research group Urban Emissions called the study a solid effort to quantify some of the economic costs of pollution, given "what information is available."

"Everything comes down to a lack of monitoring data in India," said Guttikunda, who was not involved in the study. "If you don't have enough monitoring information, you don't know how much is coming out in the first place."

India developed extreme air pollution while relying on burning fossil fuels to grow its economy and pull hundreds of millions of people up from poverty. More than 300 million Indians still have no access to electricity, with at least twice that number living on less than $2 a day.

While India has pledged to grow its clean-energy sector, with huge boosts for solar and wind power, it also has committed to tripling its coal-fired electricity capacity to 450 gigawatts by 2030. Yet there still are no regulations for pollutants like sulfur dioxide or mercury emissions, while fuel standards remain far below Western norms and existing regulations often are ignored.

To meet its goal for coal-fired electricity, the Power Ministry says the country will double coal production to 1 billion tons within five years, after already approving dozens of new coal plants.

The coal expansion plans through 2030 will at least double sulphur dioxide levels, along with those of nitrogen oxide and lung-clogging particulate matter, according to a study published in December by Urban Emissions and the Mumbai-based nonprofit group Conservation Action Trust.