McCann catches on with Tigers 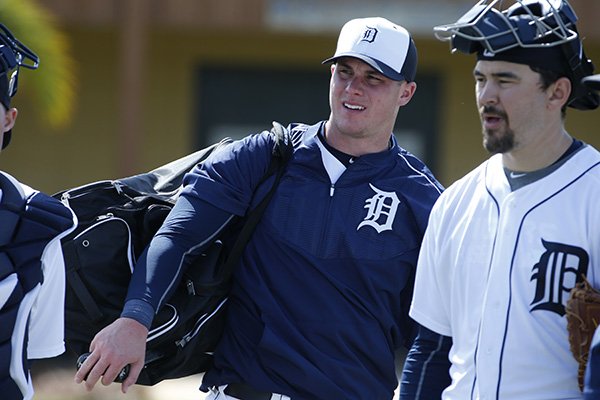 FAYETTEVILLE -- Some major leaguers may have to wait years to catch a Cy Young Award winner. Some never get the chance.

Former Arkansas Razorback James McCann did it in his first two games after being called up to the Detroit Tigers last September.

"I learned a lot in those starts," McCann said recently at Baum Stadium before leaving Fayetteville to report to the Tigers' spring training home in Lakeland, Fla. "Their experience and knowledge is off the charts.

"I just try to take everything I can from them and apply it to how I play and help the other pitchers I catch."

This is the fourth spring training McCann, 24, has gone to with the Tigers, but this one has a different feel for him. After working his way through the minor league system, many Detroit media outlets are projecting McCann will make the Tigers' opening day roster and get significant playing time this season behind starting catcher Alex Avila.

"He's a guy we look forward to being an everyday starter at the major-league level," Tigers General Manager Dave Dombrowski said Feb. 3 when asked about McCann during a speaking engagement in Detroit.

McCann said he was flattered by Dombrowski's comment, but he won't let it to go to his head.

"Nothing's ever handed to anyone, so it doesn't mean just because he feels that way that my job's done and I all I have to do is wait for my turn," McCann said. "I still have to go out and take advantage of every opportunity that I'm given.

"I'm just thankful for the opportunity to go to a big league camp and fight for a spot."

McCann helped the Tigers win their fourth consecutive American League Central title last season, when they edged Kansas City by one game. In his start against the Royals, McCann went 2 for 5 with 2 runs and 1 stolen base.

"It was very rewarding to play in a pennant race," said McCann, who batted .250 (3 for 12) in 9 games with the Tigers. "The first thing I was told: 'You're not here to sit around and watch, you're here to help us get into the playoffs.'

"I remember Avila coming to me before my first start saying, 'Don't change anything. Just play the way that got you here. You're here for a reason. Don't think just because we're in a playoff race that you have to change who you are. You're going to help us get to the playoffs being you.' "

Avila, 28, has been Detroit's primary catcher the past five seasons. He said he is enjoying working with McCann.

"We've definitely been talking a lot the last couple of years to help his learning curve," Avila told the Detroit Free Press. "He's a great kid, he's got a good head on his shoulders, so I'm excited to see how he continues to develop."

"It wasn't like I had a mechanical breakthrough," McCann said. "I started to understand who I am as a hitter."

McCann, 6-2 and 210 pounds, said he's learned to make adjustments in the same at-bat rather than waiting until the next game or next week.

"This game is all about making adjustments," he said. "Now I can feel what I need to do, but that only comes with time and experience.

"The key to me is having consistent quality at-bats. If you're doing that, the numbers will take care of themselves."

"James is one of the best catchers that ever came through here," Arkansas Coach Dave Van Horn said. "When he stepped onto campus as an 18-year-old, he already was a lot more mature than a lot of the kids in our program.

"Physically, he's bigger and stronger now. He's put on 20 or 30 pounds. He's right there to be a big leaguer, and I think he proved it last year with the way he caught when he got to come up to Detroit at the end of the season.

"I know he won over their coaches and a lot of their pitchers. That says a lot when a couple of veterans like Price and Verlander want you behind the dish."

Price (Vanderbilt) and Avila (Alabama) played in the SEC as did McCann, who said players from the conference throughout professional baseball have a camaraderie.

"SEC guys have a special bond and look out for each other," McCann said. "There's no other grind in college baseball like the SEC, so it's like a brotherhood."

McCann married his wife, Jessica, in November. They live in Fayetteville in a house McCann bought in 2012.

"It got turned from a bachelor's pad into a woman's home," McCann said with a laugh. "Fayetteville is home now. It's a great place to live, and I can use Arkansas facilities for my off-season training, so hands down this is the best place for us."