Bill to allow guns on campus approved by committee 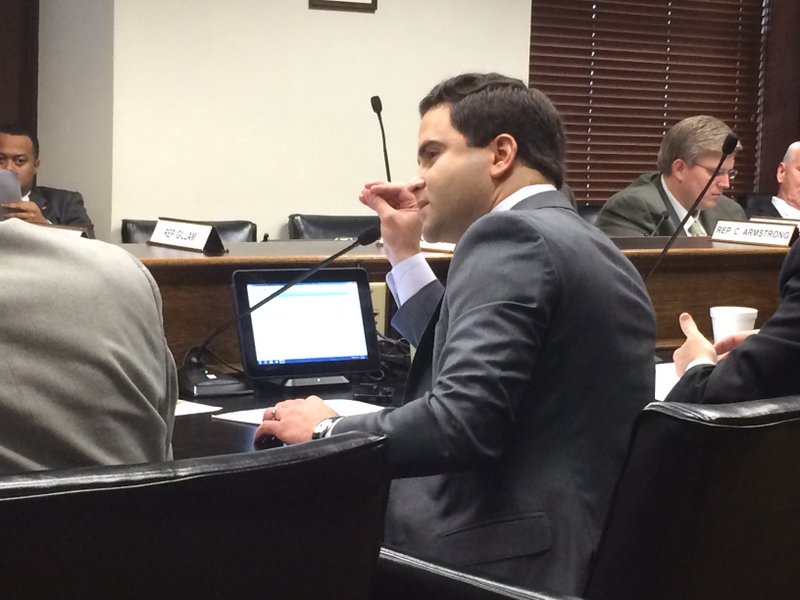 Rep. Warwick Sabin, D-Little Rock, asks questions during a House Committee on Education meeting about an amendment to House Bill 1077, which would allow concealed-carry permit holders to carry weapons on college and university campuses.

An amended bill that would allow public college faculty and staff members with concealed-carry permits to carry weapons on campus passed the House Committee on Education on Thursday.

The committee approved an amendment to House Bill 1077, sponsored by Rep. Charlie Collins, R-Fayetteville, that would allow universities and colleges to require active shooter training, as well as choose to not allow weapons in daycares on those campuses.

Rep. Warwick Sabin, D-Little Rock, expressed concern over the active shooter training and not carrying weapons in daycares not being required.

"We're saying universities have to allow these people to carry these weapons, but they don't have to require them to go through the active shooter course," Sabin said. "I thought the whole point of amendment as compromise if we're going to force universities to carry these weapons, at the very least we should require they go through active shooter course."

The bill failed to pass through the committee three weeks ago, and Collins said the amendment provided a compromise to help committee members feel more comfortable with the bill.

Baltz said the active shooter training would be provided through local police jurisdiction, and Rep. John Walker, D-Little Rock, questioned if these records would be available to the public through the Freedom of Information Act.

Collins said the records would be treated as concealed-carry permit records currently are, where they would not be available through the public as they are currently maintained by Arkansas State Police and are only available to law enforcement.

"I'm trying to understand the public advantage, at least teachers and administrators ought to know who have been through training and who has been authorized to carry guns," Walker responded. "At least a teacher in a class ought to know, and in some cases students ought to know."

No one from the public spoke for or against the bill.

Rep. Mark Lowery, R-Maumelle, moved the bill to pass as amended, and the committee passed it on a voice voice.

The bill will now head to the full House for approval.