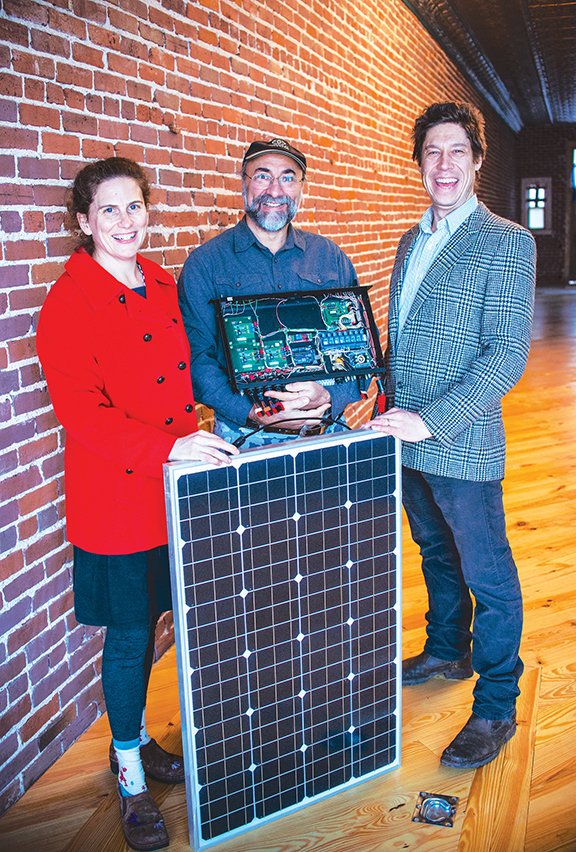 Cheryl Roorda, left, radio station “mom”; Bob Nagy, an engineer holding the telemetry and remote-control power supply or “brain” of the system that runs the future radio station on DC current; and Zac Smith, station manager, stand with a solar panel in the space along Ouachita Avenue that will become the station.

Low Key Arts has always been a community effort. The nonprofit, co-founded by Bill Solleder and Shea Childs, has served Hot Springs by promoting the local arts scene. The organization founded Arkansas Shorts in 2008 for the purpose of raising funds for The Valley of the Vapors Independent Music Festival in Hot Springs for their rock festival endeavor, but it has grown into an entity of its own. Arkansas Shorts entrants must be current residents of Arkansas.

This reflects Low Key Arts’ latest project. In May, the organization secured a license from the Federal Communications Commission to build and operate a low-power FM radio station that will serve as a community radio station, broadcasting within an approximately five-mile radius. The station, KUHS, will also stream online. After some research, the organization determined that it is feasible to run the broadcast elements of the station with solar power, which will make it the first solar-powered radio station in Arkansas.

Since May, the 501(c)(3) has been running a capital campaign. One of the potential broadcasters, Red Door Studios, held a fundraiser show Nov. 1 called Cabin Fevil, an original script produced by the theater company. Studio workers have written a script for a live radio drama that they are pitching. Other fundraising efforts include rock concerts, wine tastings and parties. But the final $10,227 of the total $30,000 goal was pledged by backers on Kickstarter. The project was successfully funded on Dec. 16.

“It’s really exciting,” Solleder said. “What an exciting way to have a fundraiser — to be able to watch it every single day. At first we had a 30-day campaign, and we came out of the gate real strong. Then, well probably at the end of the second week, beginning of the third week, it sort of sloughed. And then the last week, all of a sudden, I guess everyone was waiting to see how it would go. I think we raised 70 or 75 percent of our goal in the last week.”

Now that the project has the funds to start construction, Low Key Arts is aiming to hit the airwaves in the spring. The Kickstarter funds need two weeks to process through Amazon and will be transferred in the first few days of the year. Arkansas Shorts was held Saturday, meaning the team can now dive headfirst into the radio station’s construction.

“I guess the next thing is we get to go shopping,” Solleder said. “I think the funnest part is shopping for turntables and CD players and studio computers and microphones — that sort of thing.”

The majority of the funds from Kickstarter will go for equipment, while funds from the city will go to streaming capabilities. Money collected from other fundraisers will fund the solar equipment and the broadcast chain.

Low Key Arts has issued an open call to the people of Hot Springs to submit proposals for radio programs and has received just over 50 proposals. Some were accepted on the first look, and other proposers were asked to submit demo tapes.

“As a community radio station, it’s our job to serve Hot Springs and serve the voice of it,” Solleder said. “Hot Springs is a very quirky and eclectic city, and I think the programming will reflect that quirkiness.”

While Hot Springs has a strong community but lacks community-radio programming., the FCC’s effort to free up frequency and groups like Low Key Arts are trying to remedy that with low-power stations.

“The community voice has been lost,” Solleder said. “For instance, in Hot Springs, there’s really only one program that I can think of — and it’s on the AM dial — that is dedicated to community programming.”

Although the immediate plan is to power the broadcasting side with solar power, the studio will still be on the grid. The plan is to one day integrate solar power throughout.

The broadcasting tower is close to downtown, and the 5-mile radius should cover most of Hot Springs. It may even reach as far as Mountain Pine and areas southwest of the city.

This spring, Hot Springs could have a new venue for local artists and organizations that represent the sustainable, local movement — an addition to the galleries, bathhouses and other outlets that already give The Spa City its unique flavor.