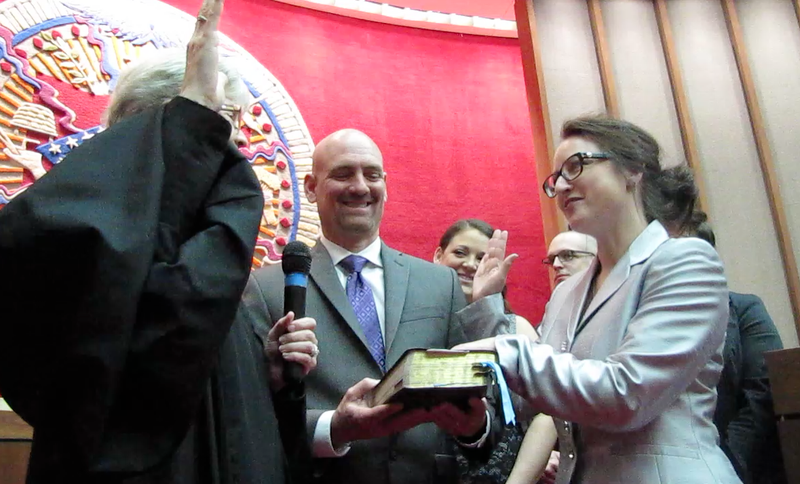 Three Supreme Court justices were sworn in Tuesday in a formal ceremony marking the beginnings of their eight-year terms and the first time women have held a majority on the body.

Rhonda K. Wood and Robin Wynne, both former Court of Appeals judges, joined the court for the first time while Associate Justice Karen Baker was sworn in again after her reelection.

Chief Justice Jim Hannah called the day "historical" and Wood, after being sworn in by retired Associate Justice Annabelle Imber Tuck, the first woman elected to serve on the court, spoke of the court's new makeup in her speech.

"I do want to say that a female majority does not mean a female voting bloc," Wood said. "Gender does not equate to voting similarly. Now from time to time I would expect you will see all four justices voting in the majority and they will all be female. But that will be because of the law, not because of our gender."

But Wood called the female majority "historic" and noted no women served on state's high court or the U.S. Supreme Court when the four female justices now on the Arkansas Supreme Court were born.

"As children, dreaming of sitting on this court was not in the realm of what we could believe was attainable," she said. "That has now shifted."

Baker, who was sworn in by Goodson with an assist from Hart, also noted the female majority in her remarks.

She recalled how shortly after her daughter was born, Baker was carrying her out of the Court of Appeals when a judge came up and remarked that she "won't be intimidated by these judges" when she grows up.

"I said well, no, if I have my way she won't be intimidated by anything at all," Baker said. "So that's my hope for all our daughters and I think that we're making great leaps here today."

Wynne drew laughs when, in his remarks, he recounted how his father in 1974, then a judge in Fordyce, found Keith Richards of the Rolling Stones guilty of concealing a weapon when the band stopped in the Arkansas city.

"In 2003, Gov. Mike Huckabee after playing his guitar on stage with the Rolling Stones who were on tour in Little Rock, pardoned Keith Richards," Wynne said as he offered an overview of his path to becoming a justice on the high court. "Ironically, I was the district judge in Fordyce at the time."

Wynne closed his remarks vowing to work hard and "contribute based on the slate that I bring this court."

"Our relationships and the decisions that we make will impact generations to come just as those that have come before us have done," he said. "So in beginning, I pray for each one of you and for God's blessing on this court."