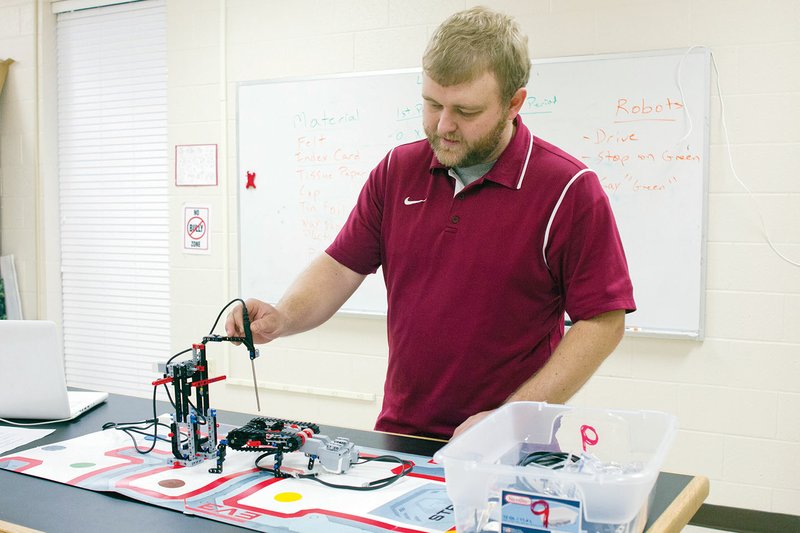 Beebe Junior High School teacher Tate Rector shows off one the robots designed by his students. The robot measures the internal temperature of a Hot Pocket.

BEEBE — Many people who have eaten a Hot Pocket know the internal temperature of the pastry can be a gamble. Sometimes the outside is perfect, but the filling is still ice cold. Other times, the outside can be just warm enough, and the filling is so hot it scalds the tongue of the person trying to eat it.

What if consumers could know the temperature was just right before biting into their snacks? A group of students at Beebe Junior High School wanted to find a way to achieve that goal, and through the new engineering classes at the school, they were able to build a robot that measures the internal temperature of Hot Pockets to avoid an unfortunate and frustrating eating experience.

This is the first year Beebe Junior High School has offered engineering classes, and teacher Tate Rector said he has been pleased with the way his students have taken to engineering.

Beebe Junior High School Principal Chris Ellis approached Rector at the end of last school year to see if he would be interested in starting an engineering class for the school. Students at Beebe High School have access to engineering classes, including one that focuses on drones, and the administration at the junior high school thought it would be wise to introduce students to engineering before they start ninth grade.

“We wanted to introduce it to kids this age before they head over to the ninth, 10th, 11th and 12th grades,” Rector said. “At the same time, Harding University’s STEM (science, technology, engineering and mathematics) program was doing a two-week class in the summer about engineering. It worked out great. I did the two weeks and learned a lot about the curriculum and how they incorporate robots. We brought that back here to start the class.”

Of course, starting an engineering class can be very involved. A school cannot simply buy a set a textbooks and expect to have a quality engineering class — there are practical models and tools that help students create and practice their engineering skills. Rector said he learned about Lego robots at the STEM workshop at Harding University in Searcy, for example, but it takes money to make sure there are enough robots for the students in the class.

Through grants and the support of the school’s administration, Rector has been able to get the technology and infrastructure to start two solid engineering classes, including 11 Lego robots so the students can form groups in order to work on a robot together.

“We started out with nothing,” he said. “We’ve been very fortunate. We have 11 robots with about two to three students working on each one, and that’s the perfect amount. If you have more students than that working on a robot, you have a lot of kids standing around doing nothing. They really enjoy it.”

Currently, the classes are working on robots with vernier probes that take temperature, pH and other measurements, then act on those measurements. One group designed the Hot Pocket temperature recorder. Another group designed a robot that can add another substance — such as tea bags or ramen noodles — to a pot of water when the temperature gets to a certain point.

“A group of kids built a robot that will test the pH of an aquarium,” Rector said. “Depending on whether that reading was high or low, it could add baking soda, and it had a motor that would stir it up to distribute that throughout the water.”

The students in Rector’s classes are 12 to 14 years old, and he said they seem to be enjoying their projects. They could easily transition into the more-advanced engineering classes at the high school in the coming years, and their education in the Beebe School District will provide a firm foundation, should they choose to pursue engineering as a career.

“They’re really getting into it,” Rector said. “They have been working on the vernier engineering program over the Christmas break, and a lot of them came in the week of testing when they didn’t have to be here to work on their projects. That’s rare.”

After the vernier project, Rector’s students will participate in a project through the University of Arkansas that utilizes the computer game Roller Coaster Tycoon 3. In this project, the engineering students will design a virtual amusement park and compete with other students across the state to create the park that best displays industrial engineering concepts.

At the end of the day, giving students access to skills that will help them in the future is the main goal of the classes. Robots are fun, and most kids would jump at the chance to play a computer game in class, but the skills they learn along the way will help them in any number of career options. Rector said he brings in guest speakers and talks about what engineers do in the real world to hopefully instill a long-term interest in the students.

Rector has applied for another grant — the Project Lead the Way grant — and he will find out within a month if he received the grant to continue to improve the class for next year.

“We hope next year to incorporate some drones that will lead over into the class at the high school,” he said.

Additionally, there is the possibility for an engineering class geared toward female students. Rector said there is a trend both in his classroom and in other academic settings concerning engineering in which the girls are interested in the material but are less likely to speak up and share their opinions. The goal is that a class with just female students will help them be bold in their engineering skills and continue to study STEM in the future.