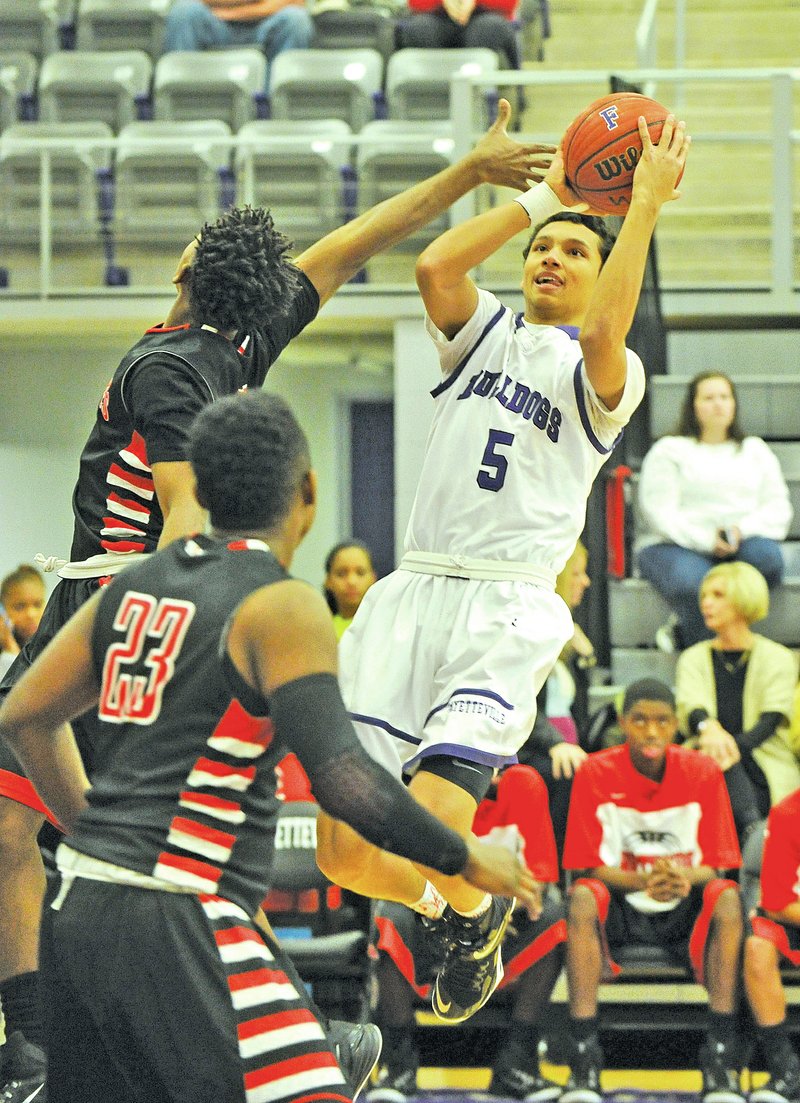 FAYETTEVILLE -- Both coaches agreed Friday's game between Fort Smith Northside and Fayetteville didn't make for a prettiest of starts to the 7A-West Conference season.

But for Fayetteville, the outcome was just fine.

The Lady Bulldogs used strong defense against Fort Smith Northside's top scoring threat, Aahliyah Jackson, to slow down the Lady Bears attack. Then after rallying from a five-point third quarter deficit, Fayetteville made the neccessary stops and clutch free throws to hold off Northside, 45-42, at Bulldog Arena, to tip off league play in.

The Lady Bears are ranked No. 9 nationally in the latest Max Preps Excellent rankings.

"It definitely wasn't pretty and even if Northside had won the game I would say the same thing. It was just a grind of a game," Fayetteville coach Vic Rimmer said. "There was a lot of turnovers, a lot of people checking and pushing. But that's what you expect in the 7A-West."

Northside (14-1, 0-1 7A-West) had defeated Fayetteville, 51-42, in the semifinals of the Tournament of Champions in Fort Smith on Dec. 12. In that game, Jackson scored 31 points and the Lady Bears were the team who found their shooting touch. But on Friday, Northside connected on just 13 of 53 field goals and Jackson was held to five points, scoring none after intermission.

"Give Fayetteville credit," Lady Bears coach Rickey Smith said. "They hit a lot of shots and hurt us on the offensive boards.

"We hadn't lost and game and all that and the pressure got to us. But Fayetteville's a good team. We played them in the Tournament of Champions and we hit some shots. Tonight they hit some shots and our offense is pretty stagnant right now."

Fayetteville (9-5, 1-0) led the entire fourth quarter, but never had more than a one possession lead until the closing seconds. Free throws made the biggest difference in keeping the Lady Bears at bay, as a 7-for-8 effort in the closing quarter helped pull out the win.

Holmes finished with 18 and Crockett added 11 off the bench in her return from missing five games with a sprained foot. Tiarra McDonald led Fort Smith Northside with 14.

Fayetteville trailed by 13 points in the second quarter, then roared back before closing with a strong finish in an overtime win to open 7A-West Conference play against the visiting Grizzlies on Friday.

Fort Smith Northside (10-5, 0-1) built a 25-12 lead behind a strong start from 3-point range. But Fayetteville scored 21 of the last 26 in the first half, then battled back and forth in the second half as the Grizzlies finally went cold before the teams settled on overtime tied at 53-53.

In the extra period, Fayetteville took over. Josh Breathitt, who finished with a game high 22 points and 10 rebounds, scored the first four points as Fayetteville started an 11-0 run to pull away.

"They kind of cooled off a little bit in the second half and that was really big for us," Fayetteville coach Kyle Adams said. "I don't know if it was our size or not, but that was big for us.

"Northside's a really good basketball team and for us to step up and beat them on the night when they shoot the ball well is big for us."