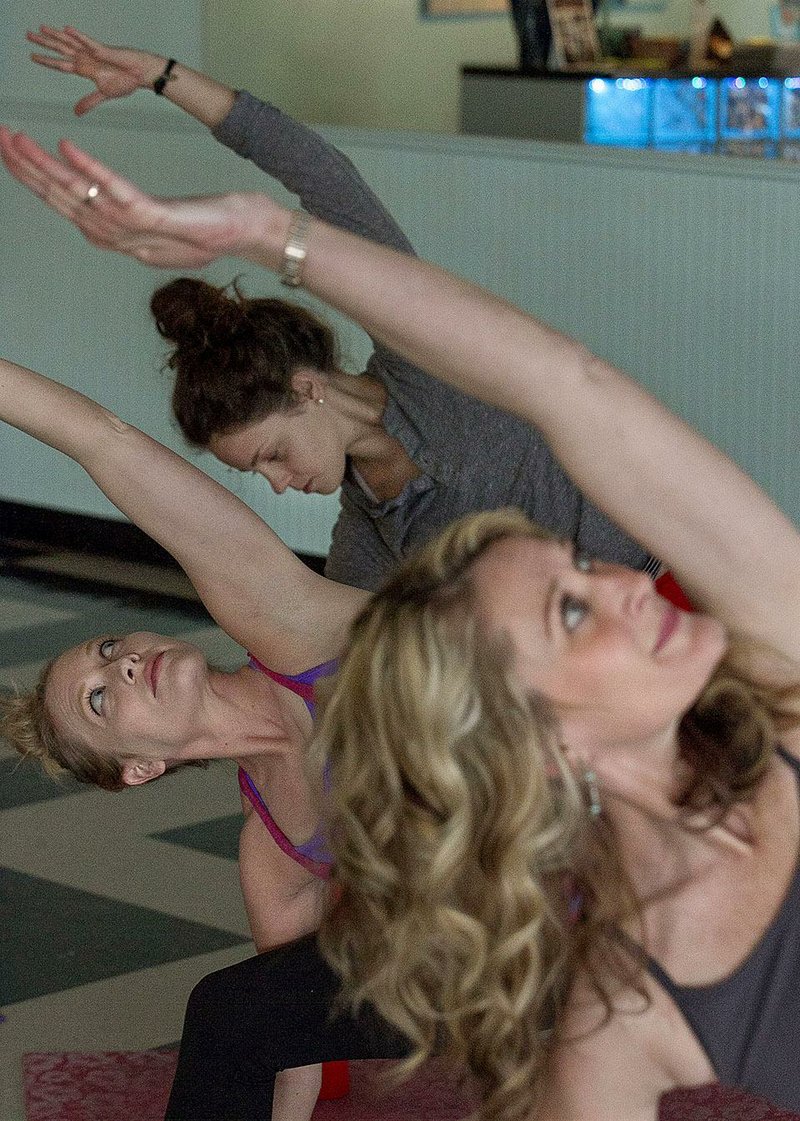 Arkansas Democrat-Gazette/BENJAMIN KRAIN --1/10/14-- Yoga teachers Paige Krueger, top, Erin Lorenzen and Stacey Faught, right, practice at Blue Yoga Nyla in North Little Rock in preparation to train others as yoga teachers. A non-profit group, Yoga Alliance, has been working with state legislators to create a draft bill that exempts yoga teacher-training schools from the authority of the State Board of Private Career Education.

After almost six months of back-and-forth with a state regulatory agency that wants to license them, schools that train yoga instructors are now taking their fight to the Arkansas General Assembly.

Legislators are crafting a bill to change the code governing the state Board of Private Career Education -- the group that oversees private post-secondary career schools for fields such as real estate, bail bonds, and tattooing and body piercing.

The legislation would add language preventing the board from exerting its authority over yoga teacher-training schools as well as other instructor-training programs such as horseback riding, physical fitness, martial arts and dance, which Sen. Uvalde Lindsey, D-Fayetteville, said are "avocational and recreational" and therefore should not be regulated by the state.

The director of the state Board of Private Career Education maintains that licensure is necessary to protect the consumer -- both the students going through the schools to become instructors and the everyday yogis who seek safe, quality classes from well-trained teachers.

But owners of the schools and the legislators working on the bill argue there have been no complaints recorded about the state's yoga teacher-training schools, and that the board's move is an example of a government entity overstepping its bounds.

"It just felt to me like government overreach because there was not a breakdown in their system as it currently existed," said Rep. Charlie Collins, R-Fayetteville. "This is a clear instance where a self-regulating group is operating just fine and all of a sudden government says, 'Oh, no, we'll take this over.' If it wasn't broke, there's no need to come in and try to fix it."

The state Board of Private Career Education sent letters to the state's 12 yoga teacher-training schools in July telling school owners they'd face a penalty if they didn't apply for licensure or exemption with the agency or cease operations.

"I think they thought yoga teachers would just sit back and go, 'OK, I guess this is what we're going to do,'" said Sherri Youngblood, owner of Sage Yoga in Little Rock. "Well, we're not."

In October, owners of the affected schools were joined by Yoga Alliance, a nonprofit organization that establishes yoga teacher-training standards for about 3,200 schools nationwide, in an effort to have the industry regulate itself.

Richard Karpel, the then-president of Yoga Alliance, said the nonprofit's credentialing system was all the oversight the schools needed. At that time, all of the state's yoga teacher-training schools were already certified through the organization.

Yoga Alliance hired Catlett Law Firm in Little Rock, and attorney Paul Charton presented to the state Board of Private Career Education in December a resolution that would give blanket exemption to yoga teacher-training schools.

In a four-hour meeting about the issue, Charton reiterated to the seven-member board that the schools fell under a section in state law that says programs offered for avocational or recreational personal improvement -- and not for the purpose of enhancing an occupational objective -- are exempt from the board's authority.

The resolution was unanimously denied after board members agreed that a graduate of one of the schools could go on to make a job out of teaching yoga courses.

Brenda Germann, director of the state Board of Private Career Education, said that by regulating yoga teacher-training schools the agency is only carrying out its purpose: to protect ethical school operators and their students.

"Our concern is still the protection of students that enroll in these programs," Germann said. "We want to make sure for the people who are signing up to take classes that there's a refund policy and that the curriculum is there, that instructors are qualified and that they're not taken advantage of. This board was set up for consumer protection."

After the resolution was denied, a team of Catlett Law Firm attorneys, backed by Yoga Alliance, started lobbying for a change to state law.

Barbara Dobberthien, chief operating officer for Yoga Alliance, said licensure of the schools is "unnecessary" because yoga is safe and because those carrying out the regulation aren't qualified to create rules for yoga teacher training.

"What makes them think they know what yoga is?" Dobberthien said. "I've been very surprised by the feel of digging in their heels that has happened in Arkansas."

Germann has said the state Board of Private Career Education would not "tell schools what to teach or how to teach it," but there may be certain standards their curriculum has to meet.

In licensing schools, Germann said, the board looks at the content and objective of the programs a school is teaching, as well as its facilities, equipment and financial stability. The board also requires schools to have an attendance policy, a refund policy and a process set up to receive complaints.

Before a school is licensed, the state agency makes an on-site visit, and those checkups continue once per year "to make sure they're running like they're supposed to," Germann said.

Lindsey and Collins, both of whom have connections to the yoga community, said they plan to introduce legislation that would exempt yoga teacher-training schools and other, similar programs from the board's oversight.

Collins, whose wife has practiced yoga with one of the school owners for about 20 years, said the attempt to regulate yoga teacher-training schools could be a "symptom of a broader issue."

"There are more things than just yoga instruction schools that would fit under this," he said. "This is creating an opportunity to look at whether there's a need to scale back even more, let alone prevent it from expanding."

Lindsey, who has a longtime friend who is a yoga instructor, said the board's action to regulate the schools is "overkill" and comes at a time when the General Assembly has a "climate of less regulation is better."

"They've never covered yoga before, and then all of a sudden they want to," Lindsey said. "It's germane to the issue that we're trying to avoid additional regulation."

Fights in other states

At least three other states, New York, Virginia and Texas, have taken the same fight to their state legislatures and won.

In 2009, New York was the first state to attempt regulation of yoga teacher-training programs, and schools answered back by hiring a lobbying firm and recruiting yoga-practicing state legislators to their side. Then-New York Gov. David Paterson signed a bill in 2010 exempting the schools from state regulation.

At the same time Yoga Alliance is working with Arkansas schools to overcome regulation, it's starting the same process with yoga teacher-training schools in Colorado. Colorado's Private Occupational Schools Division recently sent letters to school owners, requesting they fill out a questionnaire so the agency could determine whether the programs fell under its oversight.

Yoga Alliance is encouraging school owners in Colorado to contact their representatives in the state's Legislature.

Dobberthien said another state's regulatory board recently contacted schools about licensure, but the agency halted its efforts after Yoga Alliance pushed back.

"The state said, 'Yeah, we're not ready to deal with this right now,'" Dobberthien said. "We were too loud for them; we made too much noise."

Youngblood, who testified at the state Board of Private Career Education meeting in December, told the state board that the regulation -- and the licensing fees that go along with it -- would shut her school down. Germann has said schools would be charged an average annual fee of $2,125.

More costly than the fees, Youngblood said, is what the regulation takes away from yoga's philosophy.

"Yoga is about freedom. That's certainly why I got into it," she said. "I think everybody collectively would agree then that this contradicts everything yoga is about. You go to yoga for relaxation, to de-stress, and it takes away one of the biggest benefits -- this freedom that you feel."