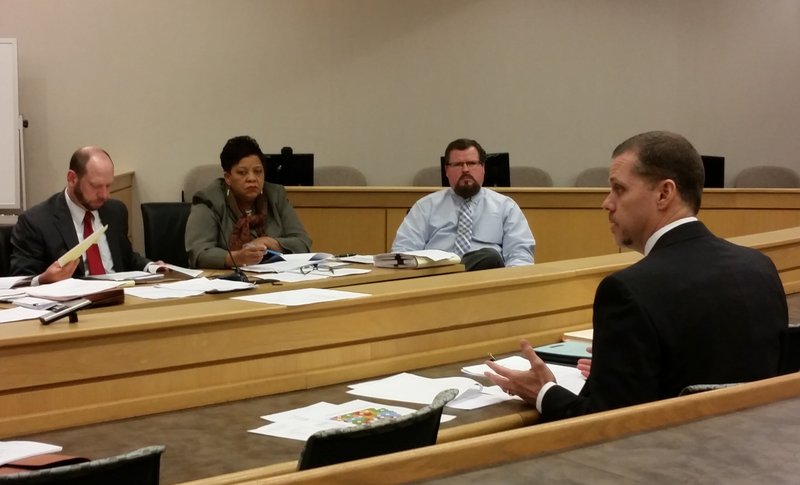 Judges in Arkansas have seen their salaries increase at a smaller rate than many surrounding states in recent years and not raising the pay could expose the state to a lawsuit, the legislative chairman of the Arkansas Judicial Council told the panel tasked with setting salaries for elected officials.

Shawn Womack, who is also a circuit judge in Baxter County, spoke to the Independent Citizens Commission on Wednesday, saying he didn't have a specific salary recommendation for what judicial employees in the council should make but noting the current salaries have lagged behind surrounding states.

The Judicial Council is composed of the Arkansas Supreme Court justices, Arkansas Court of Appeals judges and 121 circuit judges.

Womack told the members that general jurisdiction judicial salaries increased 15 percent from 2004 to 2013, compared with jumps of 43 percent in Tennessee, 36 percent in Texas, 35 percent in Louisiana, 30 percent in Oklahoma and 18 percent in Missouri.

"Of all of our surrounding states, only Mississippi has moved less than Arkansas," he said. "We're pretty quickly losing ground."

Judge pay currently ranges from $140,372 made by circuit judges to $161,601 paid annually to the chief justice of the state Supreme Court.

Womack also told the seven-member panel about a federal lawsuit that recently resulted in a 14 percent salary increase for federal judges. The plaintiffs in that case argued successfully that a lack of cost-of-living increases violated a constitutional provision that a judge's salary cannot be diminished.

Womack noted the Arkansas constitution has a similar provision.

"That's something we certainly could be exposed to potentially," he said.

Womack also told the board judges require significant education and experience but frequently make less money than attorneys who go into private practice.

Commission member Mitch Berry said there have been "robust races" for judicial seats, suggesting there is interest in the seats at the current pay. Womack said there are usually only a handful of such races across the state each election season.

"We probably have a lot of talent sitting on the sideline that doesn't run because they can make a whole lot more money" in private practice, he said.

Board members asked Womack to submit in writing a recommendation on what the salaries should be for the different judges and justices within the Judicial Council. He said he would consult with the council's board before doing so.

Also Wednesday, state Rep. Kim Hendren, R-Gravette, spoke to the commission and asked them not to raise the salaries of state lawmakers to a level which would allow legislators to use the elected position as a full-time job, saying doing so could compromise the nature of a "citizens' legislature."

"Just be careful about that," he said of the committee's role in setting pay levels. "Because when we become a full-time legislature, folks, you're going to throw a lot of us out of here. I have cattle, I have chickens, I work, I build fences and, ladies and gentlemen, we ought to have a bunch of those folks in this legislature."

See Thursday's Arkansas Democrat-Gazette for full coverage of the meeting.