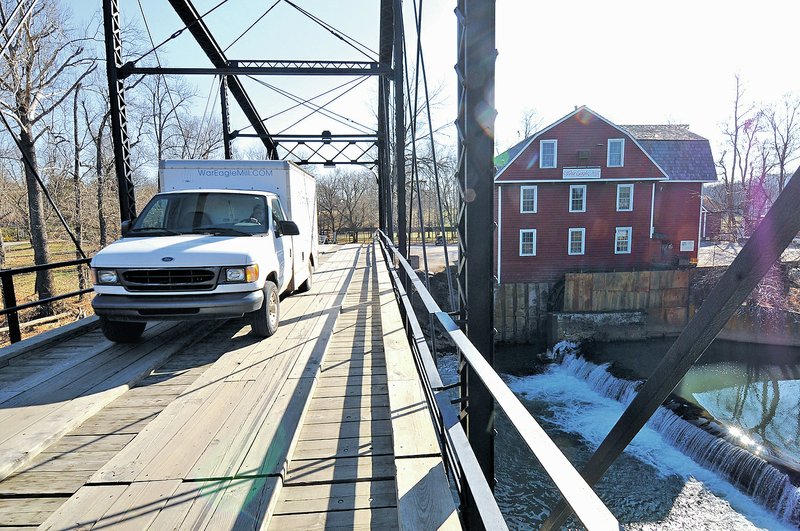 Judge Bob Clinard met with representatives of the state Highway and Transportation Department, the county's Road Department and engineers and contractors who worked on the bridge renovation project in 2010.

The county spent $642,058 in state and federal money on the bridge in 2010, said Mike Crandall, accounting manager. The bridge was closed during the summer of 2010 while the wood decking was replaced and work was done on the bridge's steel supports. In talks about the project at that time it was said the bridge could be kept for another 50 years.

At Wednesday's meeting. Clinard discussed a Highway Department bridge inspection report from October 2013 listing three deficiencies as category B that should have been addressed within six months. The report listed another 1o deficiencies in category C considered important and five in category D considered routine.

The War Eagle Bridge was built in 1907. Officials on Wednesday indicated, while it could be rebuilt, the cost would be greater than building a new bridge. An estimate prepared for the county before the 2010 work put the cost of renovating the bridge at $1.8 million.

"I don't see that it makes any sense spending that much money to rehab it," Clinard said. "So we're looking at either replacing it or bypassing it, and I'm going to initiate the study to do that."

Mitchell Archer, district construction engineer for the Highway Department, said he understands emotional and political considerations involved with historic bridges, but those aren't issues the state considers in evaluating bridges.

"Yes, you can rehab it," Archer said. "Is it worth it? No. It's functionally obsolete."

Archer indicated the bridge is still safe with the weight limits in place, but he said problems only will worsen.

"Oh no, not War Eagle. Here we go again," Jones said. "That's too historic to destroy. I'll do anything that's needed. I will round up the troops."

Jones said he's aware of the structural problems with the bridge make it impossible to move to another location. Jones said he hopes the county can give the bridge to the commission or some other entity that can maintain it and preserve it as a footbridge.

Clinard will try to do the War Eagle project with state and federal aid money. Since the county is already using state money on the Wildcat Bridge project, the War Eagle project probably will be on a three-year time line, he said. The county can't put a cost estimate on a new bridge until a location is found and the necessary elevation is determined, Clinard said.

Tom Allen, justice of the peace for District 4 and chairman of the Finance Committee, said a major bridge project will most likely have to be paid for from reserve. He said the Quorum Court has been setting aside money in the capital projects fund for use on a new courts building, but the justices of the peace will need to look at using some of that on the bridge if needed or increasing the amount in the fund. Allen favors preserving the historic bridge if possible.

"There are a lot of people who do value it highly," he said. "If you can partner with the Historic Commission or some other agency to help us preserve it that would be good."