Francis also denounced the corruption that has plagued the Philippines for decades and urged officials to instead work to end its "scandalous" poverty and social inequalities during his first full day in Manila, where he received a rock star's welcome at every turn.

Security was tighter than it has ever been for this pope, who relishes plunging into crowds. Cellphone service around the city was intentionally jammed for a second day on orders of the National Telecommunications Commission and roadblocks along Francis' motorcade route snarled traffic for miles.

Police vans followed his motorcade while officers formed human chains in front of barricades to hold back the tens of thousands of wildly cheering Filipinos who packed boulevards for hours just for a glimpse of his four-door Volkswagen passing by.

Francis has largely shied away from emphasizing church teaching on hot-button issues, saying the previous two popes made the teaching well-known and that he wants to focus on making the church a place of welcome, not rules. But his comments were clearly a nod to the local church, which recently lost a significant fight when President Benigno Aquino III pushed through a reproductive health law that allows the government to provide artificial birth control to the poor.

"Be sanctuaries of respect for life, proclaiming the sacredness of every human life from conception to natural death," Francis exhorted the crowd. "What a gift this would be to society if every Christian family lived fully its noble vocation." 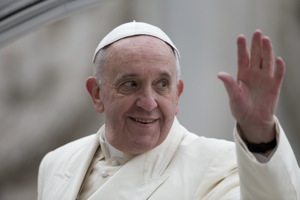