In the past 15 years, more than $1.2 million in campaign gifts to candidates for Arkansas' most powerful political offices have originated with one man: Fort Smith nursing home owner Michael Morton. 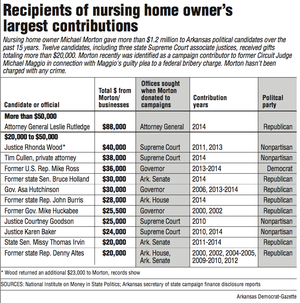 The Arkansas Democrat-Gazette reviewed a computer database of contributions from nursing home owner Michael Morton of Fort Smith and companies he owns or operates, as listed in the Arkansas secretary of state’s office.

The gifts were dated from October 1999 through October 2014.

The contributions were compiled by the National Institute on Money in State Politics, a Helena, Mont., nonprofit. The nonpartisan group tracks virtually all campaign contributions of statewide, legislative, judicial and other candidates in major races in all 50 states.

Arkansas is among a handful of states that still do not require candidates — at least those for statewide and legislative offices — to file campaign finance reports into electronic databases. The state requires only paper filings. The Montana nonprofit hires workers to transcribe the paper reports into electronic formats available to the public.