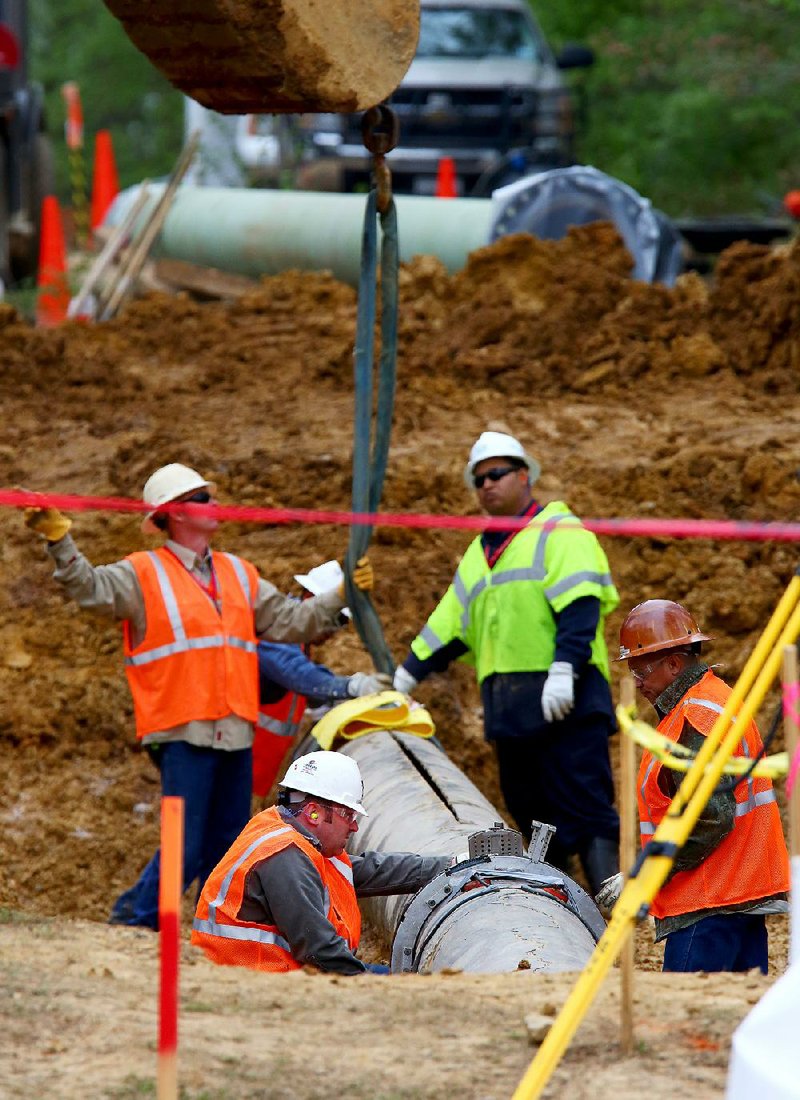 4/15/13 Arkansas Democrat-Gazette/STEPHEN B. THORNTON Exxon Mobile Pipeline workers begin to lift out the damaged section of the Pegasus pipeline Monday morning in Mayflower's Northwood subdivision. The 22 foot long crack can be seen on the top of the pipe.

Exxon Mobil successfully proposed numerous changes to a Texas laboratory's report on the cause of the Pegasus pipeline's 2013 rupture in Mayflower, even though the oil giant described the company as "independent," according to newly unsealed documents in a class-action lawsuit.

"The court has unsealed documents showing that the report was not independent as Exxon had claimed," Marcus Bozeman, an attorney for the plaintiffs, said Monday.

Exxon Mobil spokesman Christian Flathman said in an email that the company "respects the court's decision to make these files public."

Flathman defended the proposed changes -- many of which were accepted and incorporated into the final report released to the public -- as suggested "improvements" made with a federal regulatory agency's knowledge.

The disclosure appears in two of 31 documents that U.S. District Judge Brian Miller ordered unsealed after Exxon Mobil fought to keep them confidential. Other documents, including four that the lawsuit's plaintiffs specifically requested to be unsealed, remain confidential. The unsealed documents were added to the court's website late Friday evening.

One document is an email dated July 3, 2013, from Thad Massingale, a representative of Exxon Mobil Corp. subsidiary Exxon Mobil Pipeline Co., to Hurst Metallurgical Research Laboratory and to the U.S. Transportation Department. In it, Massingale proposes "edits" to the laboratory's final report and to related photograph captions.

The proposed edits include deletions of material, as well as changes and additions.

One week after that email, on July 10, 2013, Exxon Mobil released a statement to the news media summarizing the report's chief findings and calling the laboratory "independent."

The Pipeline and Hazardous Materials Safety Administration, a part of the U.S. Transportation Department, eventually posted the final draft on its website.

Asked if the federal agency was aware of the oil giant's involvement in the report and if such participation was typical, safety administration spokesman Patricia Klinger said Monday that agency officials would need to consult with their legal office and would be "looking into" the matter.

The roughly 850-mile-long Pegasus pipeline, running from Texas' Gulf Coast to Patoka, Ill., cracked open in Mayflower's Northwoods subdivision on March 29, 2013, and spilled an estimated 210,000 gallons of heavy crude into the neighborhood. Most of the pipeline, including that portion in Arkansas, remains shut down.

Flathman said Exxon Mobil sent "the suggested improvements to the draft report" to the safety administration at the same time as it sent them to the laboratory in an effort "to enhance the report's focus and clarity, factual accuracy, and consistency of terminology."

"The independent testing lab was free to accept or reject the suggested improvements," and the safety administration "was provided the same opportunity for comment. PHMSA took no exception to the final report," he added.

Exxon Mobil's communications with the laboratory "were conducted in a manner that fully respected the independent nature of the lab's testing and analysis processes," he said.

Bozeman, however, said, "Whether or not PHMSA knew about Exxon's involvement in drafting the Hurst report, the fact remains that the report was not independent as Exxon claims."

Examples of changes that Exxon Mobil successfully proposed include a section about the manufacturing process for the kind of pipe used in the Pegasus, which was built in 1947-48 by a now-defunct Ohio company. That type of pipe is no longer made.

Other changes include repeatedly altering such words such as "cracked" to "fractured," or "cracks" to "splits," as well as many changes that simply appear to be writing preferences.

It was unclear why some documents ever were sealed. One, for instance, is an August 2013 Arkansas Times article about the pipeline and Arkansas residents who live along it.

Another unsealed document -- an accident report dated Oct. 23, 2013, that was prepared by the safety administration -- says Exxon Mobil failed to consider the pipeline's Mayflower segment as susceptible to seam failure at the time.

The agency publicly addressed the issue in a series of nine probable safety violations it released against Exxon Mobil in November 2013 -- a finding that included proposed fines totaling $2,659,200 that Exxon is appealing. But the accident report provides more details.

At one point, this unsealed document says, "The operator did not consider this segment of piping susceptible to seam failure and did not select a tool capable of determining the full spectrum of seam issues known to exist in the Pegasus Pipeline; therefore, the in-line inspections performed subsequent to the hydrotests [water-pressure tests] did not detect the defects that existed in the failed segment of line."

In a separate document, the safety administration says Exxon Mobil "did not consider the line to be susceptible to seam failures because there were no in-service failures." Rather, it says, there were "only failures that occurred ... during hydrotesting of the pipeline" when the line was not transporting oil.

The safety administration says Exxon Mobil should have treated these hydrostatic test failures "as an indication of the susceptibility of seam failure, and identified this as a risk factor" in its integrity management program.

Bozeman said the safety administration's finding is "troublesome because of the age of the pipeline and the repeated warnings Exxon got from [a federal regulatory agency] over the years."

The pipeline company "continues to dispute these alleged violations through the administrative process," Flathman said.

He said the company did a hydrostatic, or water-pressure, test on the line "as recently as 2006."

The safety administration has cautioned the industry about such low-frequency electric-resistance-weld, or ERW, pipe since the 1980s. In 1988, regulators warned of 12 pipeline failures that occurred in 1986 and 1987 that involved such ERW pipe seams made before 1970. More warnings followed.