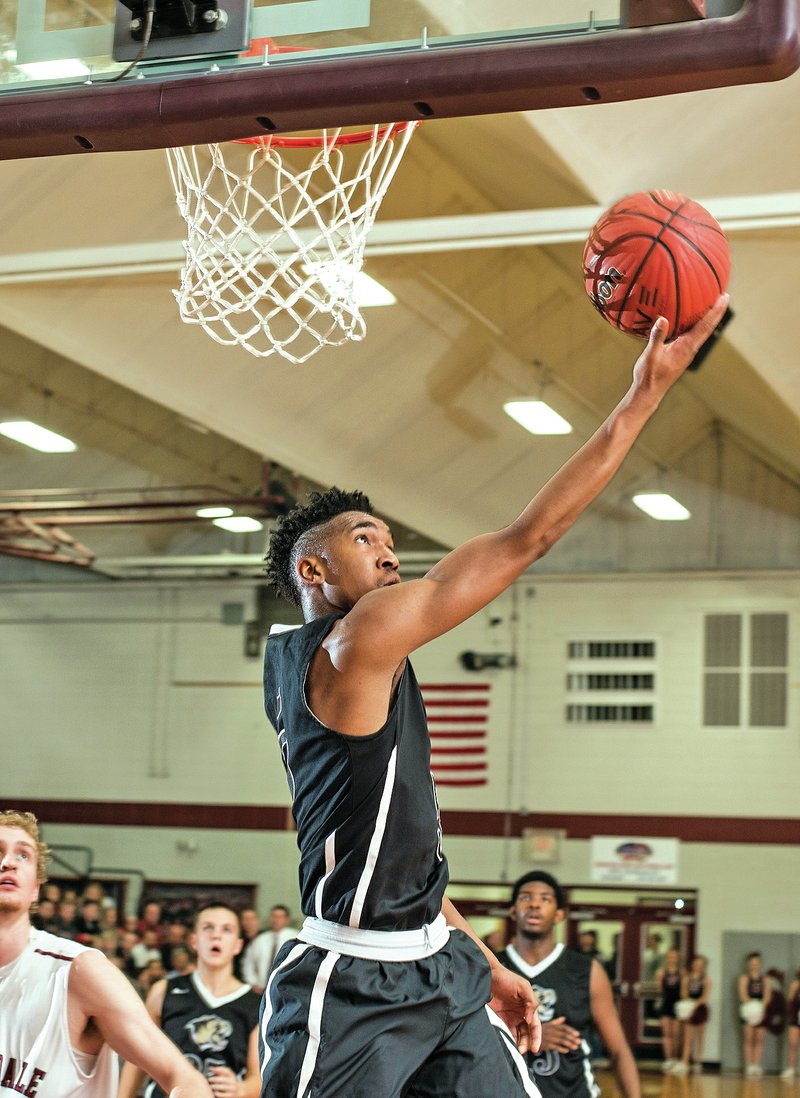 SPRINGDALE -- The Bulldog Gym crowd reached a crescendo when Chris Owens scored to tie the game at 36 midway through the fourth quarter.

It was the first time Springdale High pulled even with Bentonville all night. Malik Monk made sure it was the last.

Monk finished an alley-oop dunk with authority moments later, then came up with a steal and threw down a reverse, double-pump jam on the next possession to quiet the Springdale fans and put Bentonville back in command.

That short spurt sparked the Tigers to pull away late for a hard-fought 52-45 road win over a gritty Springdale team.

"That stretch was the pivotal point in the game," Bentonville coach Jason McMahan said.

Monk finished with 29 points on an efficient 10 of 18 shooting to lead the Tigers (9-5, 3-0), who led from start to finish aside from the brief time Springdale tied it in the fourth. Fellow junior Tyler Robinson also stepped up, hitting five of six shots and finishing with 13.

"We just try and look at mismatches," McMahan said. "We felt like Tyler could post his man, so we went to Tyler on the post a lot. We look for that mismatch and how we're going to go at it with either him or one of the others."

Springdale (7-9, 2-2) struggled to get into a flow offensively for the majority of the night, often settling for contested shots out of one-on-one action instead of executing and moving the ball.

"I thought we got too caught up in it's-my-turn basketball instead of running our stuff and doing what we have to do to be successful," Springdale coach Brad Stamps said.

The Bulldogs also went 15 of 25 from the line, with several costly misses late. Chris Owens scored a team-high 17 for Springdale, while Tyler Tutt added 12 and TreShawn Gause had 10.

Peyton Taylor scored a game-high 16 points to lead Bentonville to a blowout win at Springdale High and help avenge a last-second nonconference loss on a buzzer-beater in December.

Taylor was efficient and provided a lift for the Lady Tigers (11-6, 2-2), who had to play the final three-plus quarters of their 47-45 loss to Springdale in the Neosho (Mo.) Holiday Classic without her after an injury.

"Having Peyton for four quarters, she just kind of brings that sense of competitiveness to our team," Bentonville coach Tom Halbmaier said. "I'm very proud of the way she played."

Madison Brittain and Jordan Martin each added 13 for Bentonville, which shot 51 percent.

Springdale (10-7, 1-3) struggled mightily on offense without its starting backcourt of junior Kierra Lang (ankle) and senior Ja'Vonda Daniels (flu). The Lady Bulldogs shot just 16 percent and had eight turnovers in the first half as Bentonville built the big lead.