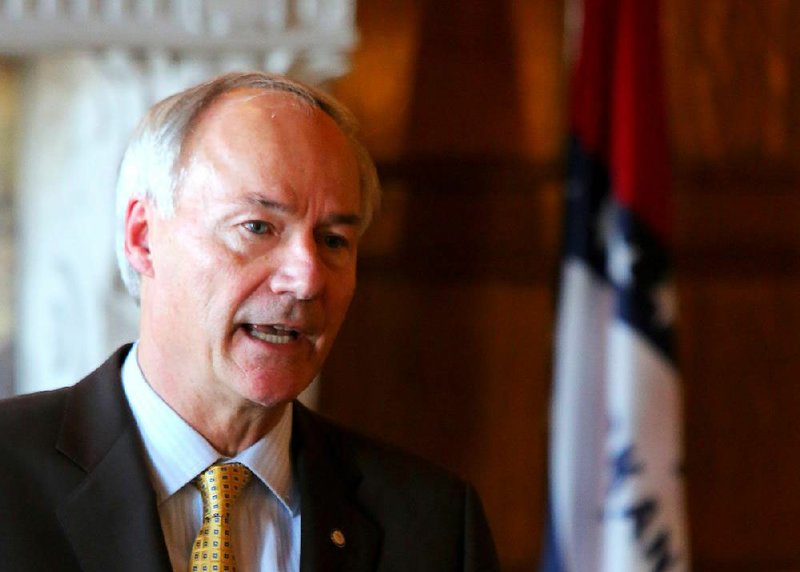 The delay in the release of his budget plan is not “a glitch” but a matter of timing to keep the focus on health care, Gov. Asa Hutchinson said Tuesday.

Gov. Asa Hutchinson said Tuesday that he'll be able to pay for his proposed $100 million income-tax cut because other state tax revenue will increase, budgets for certain state agencies will be cut and one-time surplus funds will be tapped under his proposed budget for fiscal 2016.

He was scheduled to release his proposed fiscal 2016 budget this week but told reporters Tuesday that he'll wait until next week to unveil it.

He didn't reveal which government agencies would see cuts.

Hutchinson said he doesn't want to shift attention to the budget the same week that he announces his plans for the state's private option.

"I recognize that this week is the health care speech on Thursday, and I wanted to make sure we are able to focus on that sufficiently," he said. "It is not anything more than a timing [thing] and what works best in this environment. It is not a glitch in the budget."

Hutchinson is scheduled to give a speech on health care policy, including whether he favors the reauthorization of the private option, which uses federal dollars to purchase private health insurance for low-income Arkansans, on Thursday at 10 a.m. at the University of Arkansas for Medical Sciences' Jackson T. Stephens Spine & Neurosciences Institute in Little Rock.

He said he met Tuesday with members of the Senate and House Revenue and Taxation committees to "allow them to hopefully take up [his proposed income tax cut bill] with a higher level of confidence" by revealing more details on his proposed budget to them.

Hutchinson was referring to Senate Bill 6, the legislation containing the tax cuts.

The bill's sponsor, Sen. Jonathan Dismang, R-Searcy, said he plans to ask the Senate Revenue and Taxation Committee this morning to recommend its approval.

SB6 also delays parts of a 0.1 percentage point income rate cut approved by the 2013 Legislature that went into effect this tax year.

Hutchinson acknowledged discussing the possibility of changing the law cutting capital gains taxes during his meetings with lawmakers, saying that he'd sought their opinions.

"Most of [the tax committee members] in the room with the governor [Tuesday morning] were convinced that the [governor's proposed] budget was intact and it wasn't gutting anything that didn't need to be gutted or something done unresponsibly," Files said. "There are not any huge changes to be seen as of yet."

Hutchinson said his budget will increase state support for public schools while maintaining funding for public colleges and universities.

During his meetings with lawmakers Tuesday, he said that "I emphasized, 'Don't presuppose my position on the private option based on this draft budget that we have.'

"I have always separated the private-option debate and funding mechanism with the tax cuts. I know that's been linked in previous years. I delinked them a long time ago," Hutchinson said.

The state's current fiscal 2015 budget anticipates $85 million in general revenue reductions from tax cuts enacted by the Legislature in 2013 and up to $89 million in savings from implementation of the private option, according to Beebe administration officials.

The private program extends insurance coverage to adults who have incomes of up to 138 percent of the poverty level -- $16,105 for an individual, for instance, or $32,913 for a family of four. More than 180,000 Arkansans have enrolled in private health insurance through the private-option program, according to the state Department of Human Services.

The state's cost will gradually increase to 10 percent by fiscal 2020.

Hutchinson has suggested that people on the private option should either be working, in training or attending school.

Asked what he would say to the people on the private option in advance of his speech on Thursday, he said, "I am very mindful of what has happened in terms of expanding health care to people who have not had it before ... and the human aspect of the decisions that have to be made.

"I would ask them and everyone to broaden the debate, not just within the private option consideration, but all of health care reform," Hutchinson said.

Rep. Fred Love, D-Little Rock, asked whether UAMS had seen fewer uncompensated care costs since the private option went into effect and how often those data are examined.

"It was 13.7 percent last December. It was less than 4 percent this December in uninsured individuals that will translate to a cost of uncompensated care," Rahn said. "Statewide, I think the number that the State Hospitals Association has released is $69 million in the first six months of this year in less uninsured care than last year. And we're in the same bucket."

Rahn said the savings have allowed UAMS to offer a 2 percent raise to its staff in January for the first time in about two years, which he hopes will solve some problems the facility has had with retention of nurses and faculty.

On social media this weekend, state Rep. Donnie Copeland, R-North Little Rock, expressed concern that some of the lawmakers who campaigned against the private option are now wavering; he said his comments were based on private discussions with some of those colleagues.

"It's looking more and more likely that some of those elected to end the [private option] are instead going to try to put lipstick and bows on it," he wrote on Twitter.

Copeland, who was one of more than a dozen freshmen who campaigned against the private-option program because of its cost to the state, said Tuesday that he's hearing a reluctance from some of his colleagues to actually end the program.