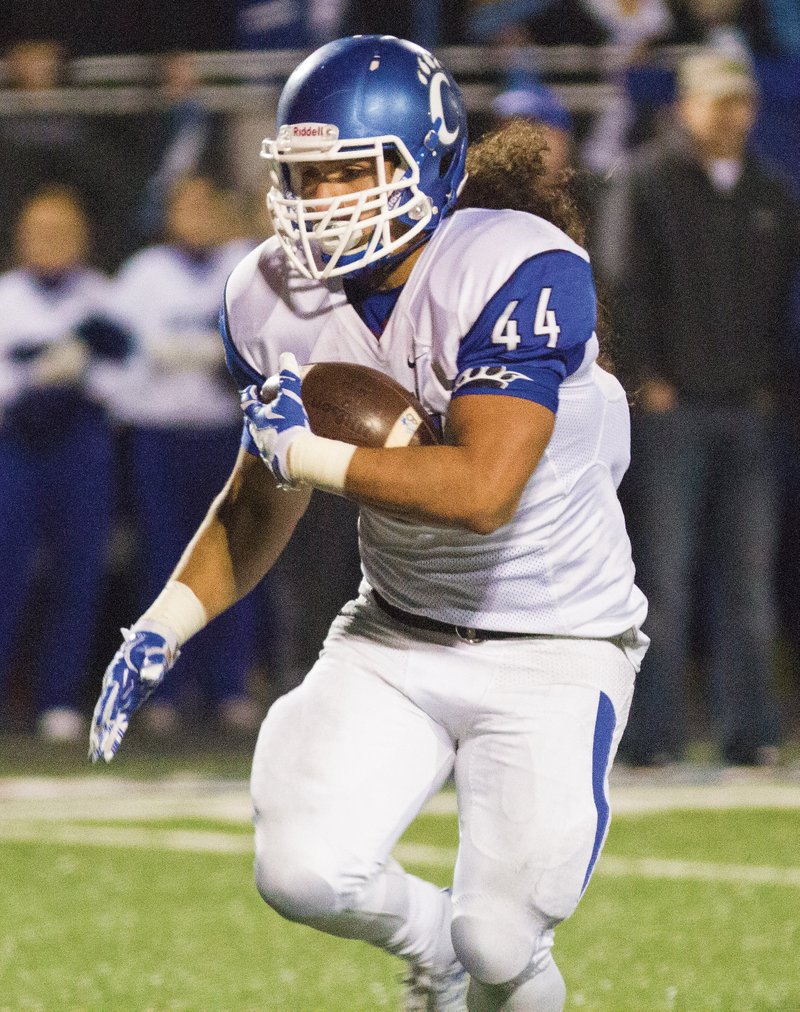 Conway’s Kevin Chamorro carries the ball against Bryant during the 2014 season. Chamorro is the River Valley & Ozark Edition Offensive Player of the Year.

CONWAY — The story of Conway’s Kevin Chamorro is one to rival any fairy tale.

Chamorro, who rushed for nearly 1,500 yards to help lead the Wampus Cats to a 10-1 record — their only loss in the Class 7A state quarterfinals to Fayetteville, the eventual state runner-up, by a touchdown — is the River Valley & Ozark Edition Offensive Player of the Year for 2014.

But two years ago, not many people expected his high school story to end this way.

“Probably the most impressive thing about him, more impressive than what he did on the field, was what he did off the field,” Conway coach Clint Ashcraft said. “When we had him as a sophomore, he wasn’t great in the classroom at all. He was eligible, but he just got by.

“Some different college coaches started showing some interest and started looking at his transcript and his ACT scores, and he realized, ‘If I want to go play college football, what I’m doing now is not going to get it.’ His last three report cards, he’s been above a 3.0. His ACT score is up, and he’s fully qualified.

“He’s going to have a chance to make a choice. He has really transformed his body, changed his attitude and his work ethic in the classroom.”

Chamorro is an example of what can be accomplished when work, determination and passion combine.

“You just can’t give up on something you really love,” he said. “You really can’t. If you really love it, you’ll fight for it. You’ll never know the outcome of it if you don’t.”

Chamorro’s high school story has a happily-ever-after ending. Now he’s looking forward to the next chapter.

Chamorro (5-10, 207) was born in Orlando, Florida, and moved to Arkansas when he was 7 after a hurricane destroyed his family’s house. His mother, Maritza Anchundia, had relatives in Little Rock, and the family moved to Conway in search of a good public school system when Chamorro was in fifth grade.

He played for Conway White in junior high, and his eighth-grade team went 9-1.

But he freely admits his guilt regarding summer workouts the summer before his sophomore year.

“I didn’t feel like waking up early,” he said.

So he didn’t play much, which had the predictable effect on his attitude in the classroom.

“I was doing bad in class because since I didn’t get to play, I didn’t care about it,” he said.

Chamorro also ran track, competing regularly in the 100 meters, 200 meters, 4x100 relay, 4x400 relay and shot put, but he got in trouble and had to miss the conference meet because of his assignment to in-school suspension.

“I was a bad kid my sophomore year,” he said.

But in the offseason coaches’ one-on-one meetings with the Wampus Cats, Chamorro’s offensive-position coach told him he had to step up because Conway would graduate two senior running backs. Chamorro was told that instead of skipping practices, he had to show up and be a leader as a junior.

“That just clicked in my head,” he said. “It was a struggle, but it was worth it. I had to be the man and step it up, and I started working hard in class, and if I needed help, I got help.”

Leigh Masterton, the CHS librarian, became a tutor and mentor for Chamorro. He also worked for her as a library assistant.

“She has helped me with every single thing in my high school career,” he said. “I honestly wouldn’t know how I would’ve been able to play without her. I have been blessed by her caring and loving me and wanting to help me with everything. I love her so much.”

“He is very charming, and he’s a kind soul, and he is mature enough to take guidance when he knows he needs it,” she said. “He would backslide at times, but we’d sit down and look at the goals he had set, and he made the appropriate changes. Seeing the progress and how successful he could be, he got a certain taste for that in the classroom, so he continued to succeed.”

Masterton said Chamorro was able to self-regulate, a skill that will help him throughout his life.

“He’s well-rounded and just a fabulous, fabulous young man, well-liked by all of his peers,” she said. “I’ve never seen him be anything but kind. He’s very mannerly and mature. I’m incredibly proud of him.”

As a junior, Chamorro had what he termed “an OK year” on the football field, rushing for 998 yards in a two-back system, as the Wampus Cats reached the state semifinals. More significantly, his grade-point average rose from 1.6 to 3.4.

He also returned to track. This time, he missed the conference meet because he’d been invited to a Nike combine in Dallas.

“We’ve been watching him grow and mature,” Ashcraft said. “To see what he did to his body in the offseason, and to see him grow like that, on the field and off, is the most impressive thing.”

But with three running backs set for rotation for the 2014 season, Chamorro didn’t set his individual expectations too high for his senior year.

Neither did his coaches.

“We knew he had a lot of potential, but our philosophy is you don’t run one guy the whole time because you can get him beat up,” Ashcraft said.

But the stats didn’t lie. Chamorro averaged 8.9 yards every time he carried the ball — 164 rushes for 1,463 yards and 20 touchdowns. He also had three kickoff returns for 67 yards and four receptions for 68 yards and one TD.

“Our guys knew anytime he touched the ball, there was a chance for something good to happen. We had a sense of confidence when Kevin was out there.”

Conway’s closest call came in the season opener, a 24-22 win over Cabot. After that, the Wampus Cats rolled through the 7A/6A Central, tested closely only by Greenwood (42-37) en route to an undefeated regular season and conference championship. After a first-round bye, Conway came up seven points short in the quarterfinals to Fayetteville, 42-35.

Everything about his magical senior year was unexpected, Chamorro said.

At press time, Chamorro was taking his college visits. He’s had good interest from Ouachita Baptist, Southern Arkansas, Henderson State, Harding, Arkansas Tech and Arkansas-Monticello, and coaches from Southeast Missouri State, the University of Central Arkansas and Arkansas State have also talked to him.

He said he hopes to study architecture.

Expect him to succeed at whatever he puts his mind to. That’s how fairy tales work.