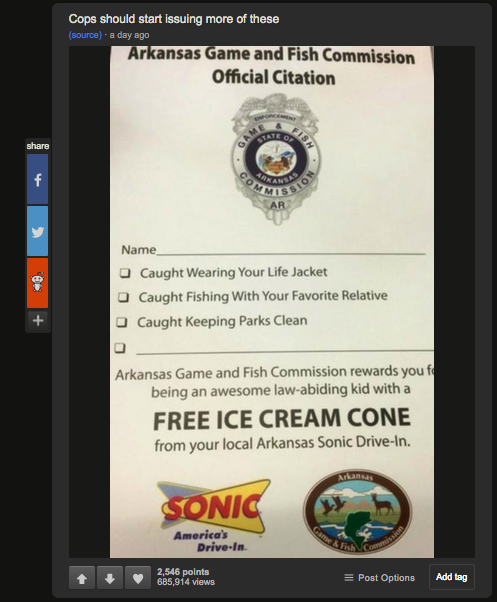 This screenshot shows an image posted on Imgur of a citation Arkansas Game and Fish Commission officers give to children they encounter on the water who are wearing their life jackets.

Arkansas Game and Fish officers are handing out faux citations that are actually ice cream coupons to children they meet on the water who are wearing life jackets, a program that's drawing wide attention online.

A user on Thursday posted a photograph of one of the blank citation coupons on Reddit under the title "Cops should start issuing more of these." It received more than 3,400 upvotes, a virtual thumbs up of approval that propelled the image to the popular website's front page and drew hundreds of comments.

The citations are aimed at emphasizing the importance of water safety in Arkansas, where law requires children 12 and under to wear life jackets on the water. Where a list of possible offenses might appear on a real citation, the officer can tick off whether the offender was caught wearing a life jacket, fishing with a "favorite relative" or "keeping parks clean." There's also a blank line if an officer wants to highlight something else.

"Sometimes, you know, you get a bad rap for pulling somebody over and making sure they've got all the life jackets on the boat or they have a fire extinguisher," commission spokesman Keith Stephens said. "We just wanted to reinforce that it's not all bad. They're trying to save lives by doing this and making sure everyone, especially kids, are wearing their life jackets."

The agency has partnered with Sonic, which donates the ice cream. The citation coupons have been offered for several years, Stephens said, noting that this year 12,000 will be handed out.

"We had to increase it because it was so popular," he said.

Hundreds of comments were posted on Reddit as well as Imgur, the image-sharing website where the shot originated. By 11 a.m. Friday, it had been viewed on the latter more than 685,000 times.

On Reddit, one commenter identified himself as an Arkansan and said that "[t]hings like this are why I love this place so much."