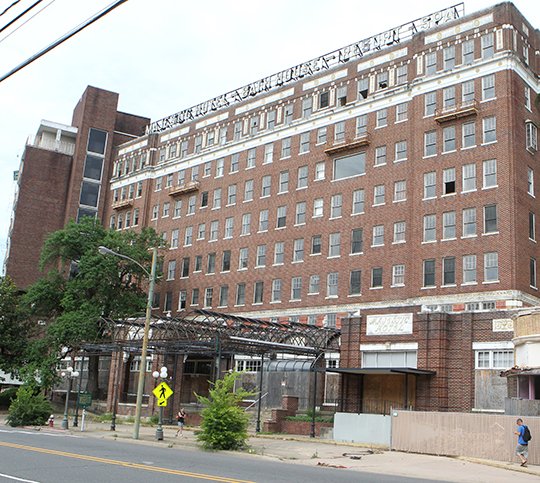 The Sentinel-Record/Richard Rasmussen POSSIBLE CITY PROPERTY: Pedestrians walk past the Majestic Hotel building Thursday morning prior to the Hot Springs Board of Directors voting to offer the owner $680,000 for the property.

The city of Hot Springs is offering $680,000 to buy the Majestic Hotel complex, which caught fire last year.

The Hot Springs Sentinel-Record reported Friday that the city board of directors voted 6-0 to make that offer the previous afternoon. That amount was in line with a request from the owners of the 5-acre property, who also asked to be released from responsibility for environmental issues tied to the property once the city takes ownership, the paper reported.

The complex owners have until 5 p.m. Tuesday to accept the deal.

The city has said it hopes to redevelop the downtown property, naming a city park, a performing arts center, an amphitheater or a thermal pool complex as possible ideas to be considered for it.

The paper reported that the Majestic's owner is expected next week to plead no contest to numerous code violations on the property, noting that sentencing would be suspended pending the sale and would be "zeroed out" if the deal is finalized.

The yellow-brick portion of the Majestic caught fire Feb. 27 and was condemned by the city less than three weeks later.