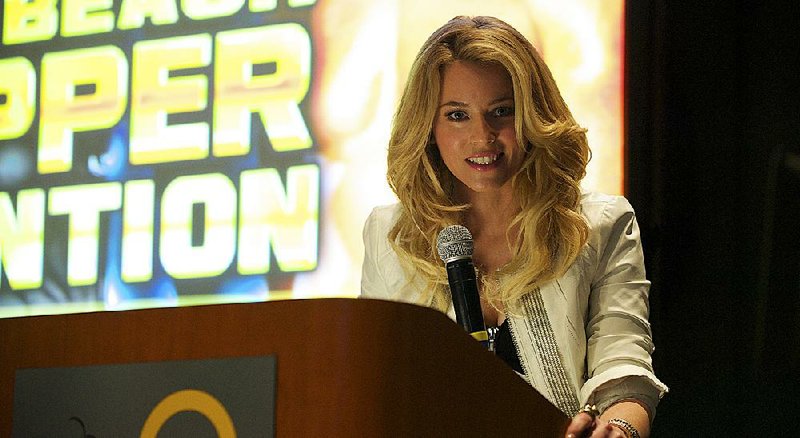 Stripper convention organizer Paris (Elizabeth Banks) is one of the few ladies who isn’t awed by Channing Tatum and company in Magic Mike XXL.

If the old "Hey, kids, let's put on a show!" MGM musicals that starred Mickey Rooney and Judy Garland featured disrobing and a few moves that make twerking look mild, they might resemble Magic Mike XXL. 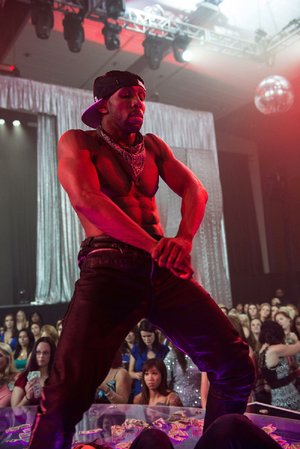 As with Mickey and Judy's movies, the sequel to Magic Mike is short on plot. Thankfully there's enough snappy banter between the dirty dance numbers to keep the film from boring any boyfriends who've been dragged in to see it. It's almost worth admission to hear the title character's potential drag queen name.

Rating: R, for strong sexual content, pervasive language, some nudity and drug use

The film catches up with former male stripper Mike Lane (Channing Tatum) as he delivers more of his own hand-crafted furniture. While he's happy making chairs and shelves, he still doesn't make enough to pay health insurance for his only employee (Juan Piedrahita).

It's unlikely anyone would pay to see a movie about Tatum, handsome as he is, assembling home furnishings.

Mike gets a distressing call informing him that Dallas, the leader of his former male entertainer (the nice wording for "stripper") review, has died. He arrives only to discover that his old boss has merely skipped town (possibly giving Matthew McConaughey a window to return for Magic Mike XXXL) but that the team known as the Kings of Tampa are eager to reunite for a final show at a convention of eager women in Myrtle Beach, S.C.

Needing some extra cash and unable to resist moving to the beat with only some of his clothing on, Mike agrees to join them on the road.

There are some mishaps along the way, but those who like sharply defined characters and delicately constructed plots should avoid Magic Mike XXL at all costs.

That said, Magic Mike XXL is hardly lacking in content. Tatum and his cohorts hardly coast on bods that look as if they belong in the Parthenon. These guys can move in ways that come close to defying every rule of kinesthesiology. You may not remember any of the names of the guys in the Kings of Tampa, but these guys also have a strong sense of showmanship. Merely dressing like a cowboy or a cop doesn't cut it for these fellows.

Oh, and sorry, while vampire stripping is apparently a thing now (thanks, Twilight!), the ladies want something more than simply falling garments and rehashed Edward and Bella cliches.

Jada Pinkett Smith and Andie MacDowell are fun as people Mike encounters on his way to Myrtle Beach, and Tatum himself exudes an unassuming charm that makes the exhibitionism on screen easier to take. If he was too proud of his formidable physique, the film would get irritating quickly.

Original director Steven Soderbergh retired from helming shortly after Magic Mike hit the screens. Oddly, he acted as director Gregory Jacobs' cinematographer (under the pseudonym Peter Andrews) and editor (billed as Mary Ann Bernard). If there is a difference between how the two directors approached Mike's world, it's that Soderbergh also explored a dark undercurrent of ego and exploitation that Jacobs and screenwriter Reid Carolin, who wrote both films, don't bother to mess with.

As a result, Magic Mike XXL is the lighter, fluffier stripper film. At least the new film was made while Tatum and his cohorts could still move fluently.