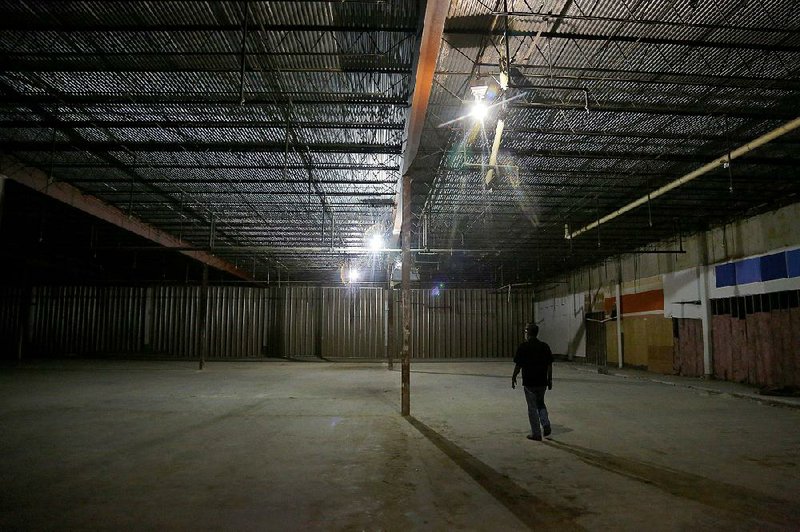 Mosaic Church pastor Mark DeYmaz walks through the interior of the old Kmart store on Colonel Glenn Road. The building will become the church’s new home.

Correction: The location of the first Wal-Mart store in Little Rock was 8717 Geyer Springs Road. The site was incorrectly reported in this story.

In the summer of 2001, Mosaic Church directional leader Mark DeYmaz and his wife, Linda, set out to start a church in Little Rock's 72204 ZIP code -- the area generally south of Interstate 630 and east of of Interstate 430. 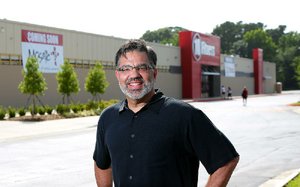 Photo by Stephen B. Thornton
Mark DeYmaz, pastor of Mosaic Church, is working to revitalize the part of Little Rock known as the University District. 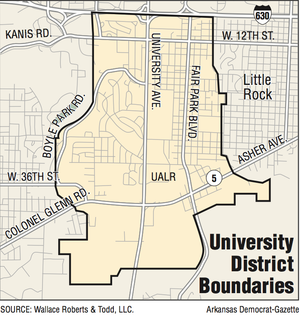 It includes the University of Arkansas at Little Rock and what is known as the University District -- a 3.5-square-mile rectangular patch of residential and commercial property on both sides of University Avenue earmarked for redevelopment and revitalization.

DeYmaz saw promise in 72204, which had fallen into decline. All it needed was a strong community anchor, he said.

"If you're going to transform a community, you have to create a church that reflects the community," said DeYmaz, who left a job at a well-established church in west Little Rock to fulfill his calling in 72204. Mosaic has 500-600 active members representing more than two dozen countries. Attendees range from the well-to-do to the homeless.

By the end of 2003, the congregation landed at 6420 Colonel Glenn Road, in the former home of Little Rock's first Wal-Mart. Mosaic Church leased 80,000 square feet for $800 a month (10 cents per square foot) from the Doyle Rogers Co. The expansive, empty building had been vacant for eight years and was overrun with vermin. The parking lot was a hotbed of drug activity, prostitution and other crime, he said.

"It was so bad, no business wanted this," DeYmaz said.

In December 2006, he signed a contract to buy the former Kmart on 10 acres at 6221 Colonel Glenn Road for $2 million with the owner giving the church $300,000 at closing. DeYmaz promised to close the deal within six years and made good on his word with two weeks to spare in 2012.

All told, the church will have borrowed $2.8 million to complete the sale and pay for improvements. Mosaic leased a large portion of the Kmart strip to 10 Fitness for more than half of the church's loan. Now they are working to attract a second tenant to open a 3,000-square-foot restaurant on the opposite end of the facility.

"The church, we're not in the business to make money, but we want to make something to fund our mission in the community," DeYmaz said at a ribbon-cutting for 10 Fitness. The church hopes to be in its space next door by the first of next year.

Sen. Joyce Elliott, who lives in the area and is a member of Mosaic, said: "We have not given up on the University District, 72204, or any place south of [Interstate] 630. This is where Little Rock is growing and going."

About the time the church was staking its claim on the previously abandoned properties, UALR was making its move to stabilize the area surrounding the university. The University District Partnership, formed from UALR's 2004 strategic planning and master planning efforts, has been working since then to address the real estate development needs and socio-economic conditions of the area.

The district is bordered roughly by Interstate 630 to the north, Boyle Park Road to the west, Fourche Creek wetlands (south of Asher Avenue/Colonel Glenn Road) to the south and Monroe Street on the east.

In 2008, the University District Development Corp. was established and incorporated as the operational arm of the University District Partnership. As a nonprofit, the development corporation qualifies to receive loans and grants from private donors and public entities. It's focus is developing affordable housing, encouraging business development and making improvements in the neighborhoods within the district.

Officials say population in the University District has been flat since 1990 and businesses have suffered accordingly. A 2013 report to the city's Board of Directors pegged population at about 8,600 people in roughly 3,400 households. Some 60 percent of residents are black, 31.5 percent are white and the rest are of another ethnic makeup.

More than 52 percent of residents are homeowners; the rest are tenants. More than a quarter of the residents are living at or below poverty level, and nearly one-third of the households are being run by single parents.

"An urban-serving university has a direct interest in the strength and viability of its surrounding area, whether it's a commercial or a residential area," said University District Partnership Director Ron Copeland.

"You've got to bring the neighborhoods back, and the commercial will follow," he said.

Copeland knows the history of the area, as well as the neighborhoods, businesses and landmarks. During a tour through Broadmoor in his van, he pointed to a home where children gather under a carport to wait for the school bus when the weather is bad.

He's also well-versed in the improvements made and planned for the district.

In the 1990s, Little Rock's gang problem centered around the Highland Courts area, on the northeastern edge of what eventually became the University District. It was the subject of national publicity, specifically, a 1994 HBO documentary titled Gang War: Bangin' in Little Rock. The city, UALR and the housing authority partnered to raze and replace Highland Courts with a mixed-income project called Madison Heights.

Other improvements include the Willie L. Hinton Neighborhood Resource Center and the Oak Forest Community Garden, where $10 a year gets you a plot for your favorite plantings. Copeland had a garden there once.

In the late 1990s and early 2000s UALR and the city of Little Rock constructed or rehabilitated 15 to 16 houses within the district. Since the development corporation was formed, the University District Partnership has rehabilitated four houses and built three, all using HUD HOME Investment Partnership monies issued through the city. There are plans to build two more with the intent of targeting first-time home buyers.

A few dozen houses may not seem like a lot when there are some 3,400 households in the district, but the improvements stand out when compared with some of dismal properties surrounding them.

Among recent commercial improvements, The Village Shopping Center at Asher and University avenues changed hands earlier this year and the old dome-shaped Cinema 150 was torn down.

Razing the theater made the 153,400-square-foot shopping center more visible and provides an opportunity for the new owner to lease the land where the theater stood or replace it with a new building for a restaurant, retail or some other use, said Hank Kelley, CEO and partner in Flake & Kelley Commercial.

As a broker with institutional knowledge of commercial buildings and uses in the University District, Kelley's well-aware of the goings on there.

Is it possible to reverse the trend of population loss and further decline? Kelley put it in perspective.

His firm's plan for the Village Shopping Center is to attract urban-based retailers that cater to a diverse population.

In May, StudioMAIN released a study of the South University Avenue Corridor intended to create pedestrian-friendly crossings and to slow traffic along University Avenue; establish a campus neighborhood along the corridor and west side of UALR; create identifying gateways and enhance the UALR neighborhood; and enhance the economic viability of the University District. StudioMAIN is a design collective comprised of individuals from the design fields in Arkansas.

A redesign of the corridor calls for removal of outdated streetlights that divide University Avenue and replace them with a widened, landscaped median, along with installation of a traffic circle at 28th Street and University Avenue, among other improvements. A presentation of the report will be scheduled for later this summer, Copeland said.

"Then, the concepts presented there will be used to guide specific development plans as we progress toward funding and rebuilding University Avenue," he added.