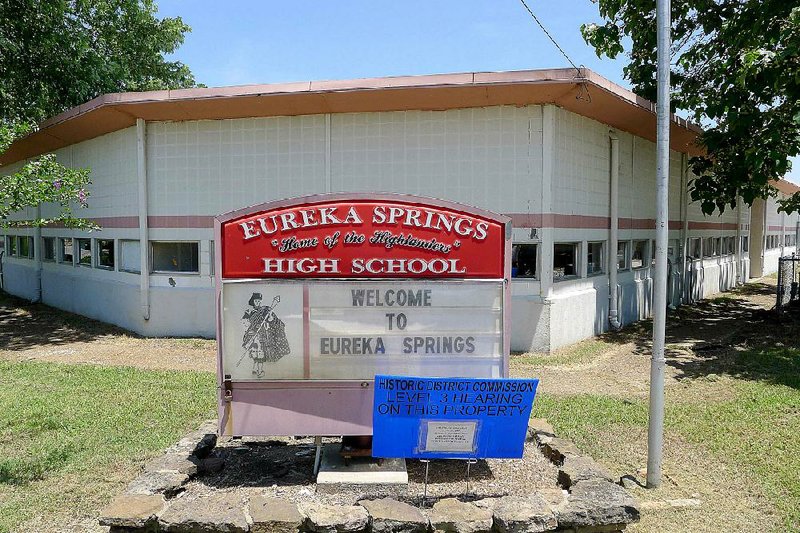 The Eureka Springs Historic District Commission has given permission for demolition of the 64-year-old Eureka Springs High School building to make way for an outdoor events center. Two other buildings on the campus would be renovated to become a community center and office park. The main building has been vacant since a new high school opened in January 2013.

EUREKA SPRINGS -- In a city famous for its Victorian architecture, the proposed demolition of an institutional-looking 1951 building has provoked preservationists, but there's been little public outcry to save it. 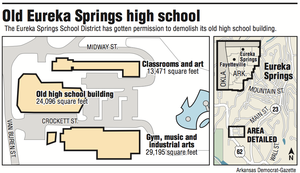 This graphic shows the location and composition of the old Eureka Springs high school.

The building served as Eureka Springs High School until January 2013, when students began attending a new school that was built on Lake Lucerne Road.

The one-story, 24,096-square-foot old high school building on U.S. 62 has remained vacant since then.

Considered by many to be an eyesore, the building was designed by a Fayetteville architect and served as the prototype for more than 50 schools that were built in 20 states and Canada.

Dee Bright, chairman of the commission, said school administrators let the building decay so they could get permission to demolish it. Bright cast the deciding vote to allow the demolition after touring the building for the first time in two years and deciding it would cost too much money to restore it.

"They had turned off the power," Bright said. "They weren't keeping it up. I was so appalled at the damage when I walked in that door. I wanted it saved, from the historic perspective. It could be saved, but it would take lots of money."

Bright said the roof leaked, and school administrators didn't put up tarps to keep the rain out.

David Kellogg, former superintendent of the Eureka Springs School District, disagreed with most of what Bright said.

"Anytime there was a leak, we patched the leak," Kellogg said. "It's hard to tarp a large building like that."

Kellogg noted that it would have been expensive to heat and air condition the empty building. He said the school district was already paying $30,000 a year for utilities, insurance, maintenance and repairs of the building.

In Eureka Springs' historic district, architecturally intact buildings that are more than 50 years old are considered to be "contributing" to the district.

Demolition of any building in the district must be approved by the city's Historic District Commission. The entire city of Eureka Springs was listed on the National Register of Historic Places in 1970 and was relisted in 2005 as nationally significant. The old high school is within the historic district.

The demolition permit is good for one year.

She said the high school fits in with the "roadside" architecture along the highway, which includes motor courts that were built in the 1940s and '50s.

"There's not an appreciation for mid-century and the auto-age here and a lot of other places," Booth said. "A lot of people hated the Victorian stuff in the '60s and tore it down. Now they think it's wonderful."

Booth said there had been some articles in the local newspapers about the demolition approval, but she'd heard no outcry from the public about it.

The design used "cluster planning." Clusters of five-sided classrooms were positioned around a central hallway, which was meant to save money on corridor construction. The design also allowed for relatively easy expansion of the schools by adding clusters.

In Maximlite schools, walls made partially of glass blocks allowed natural light into the building and made the building cheaper to construct -- about 60 percent less than the national average, according to a news release from the time.

But the glass blocks sometimes created a bright glare and heat inside the building, said Bobby Ray, a Eureka Springs building inspector and a former student who had classes in the building. Also, the buildings weren't energy efficient, Kellogg said.

The old Eureka Springs high school building has a flat roof, asbestos floor tiles, a hallway cul-de-sac with no exit and 7 feet of glass blocks supporting the roof. Concrete blocks are used for the bottom 3 feet of the wall. The glass blocks have been painted over on the outside so the exterior of the building looks like it's all concrete blocks.

Two Maximlite schools were built in Fayetteville and still exist. But the glass blocks at Asbell and Root elementary schools were later replaced with double-pane insulated glass. A dozen Maximlite buildings still stand in Missouri, but some no longer serve as schools.

The issue of what to do with the old Eureka Springs high school began in 2009, when the school district was considering a property-tax increase to fund construction of a new high school.

The commission gave the school district permission to demolish the old building in 2009, but only if district leaders built the new school on the same site. That didn't happen. The school district wanted more space for a new high school, so one was constructed on the southern edge of town.

The 7-acre school site on U.S. 62 was initially listed for sale for about $1 million. Besides the main high school building, the property included a 29,195-square-foot gymnasium building, a 13,471-square-foot classroom and two much smaller structures.

Since then, the asking price for the property has dropped considerably, but Kellogg wouldn't give a figure.

"I would say the price is very negotiable," he said.

Kellogg said the Highlander Committee, the group spearheading the effort for the outdoor event center, wants someone to buy the property and donate part of it back to the city to be used as the event center. The entire project is expected to cost between $1.6 million and $2 million.

The plan was reached through a series of meetings that allowed public input.

Under the plan, the buyer would keep the 13,471-square-foot classroom building, renovate it and lease it for office space. The old gym would be renovated and used as a community center, and sometimes for indoor banquet or event space. A section of wall and corner of the old high school building would be retained and used as part of a performance stage.

Kellogg said it would cost about $100,000 to demolish the old high school. The school district doesn't plan to tear it down, but having permission from the Historic District Commission to demolish it could make the property easier to sell to a developer.

In January, the Community Development Partnership of Western Carroll County applied for a $50,000, two-year planning grant from the National Endowment for the Arts to study the possibility of converting the old high school building into the Eureka Springs Community Arts and Trade Center. The group should learn whether it was awarded a grant sometime this month, said Sandy Martin, who is on the board of the partnership and chairman of the Eureka Springs Arts Council.

"It's been sitting there empty for almost three years, and it's an eyesore," Martin said of the old high school building.

"I think at this point people just want something done with the property. To me, it's an interesting juncture for Eureka Springs with moving forward or preserving the past."