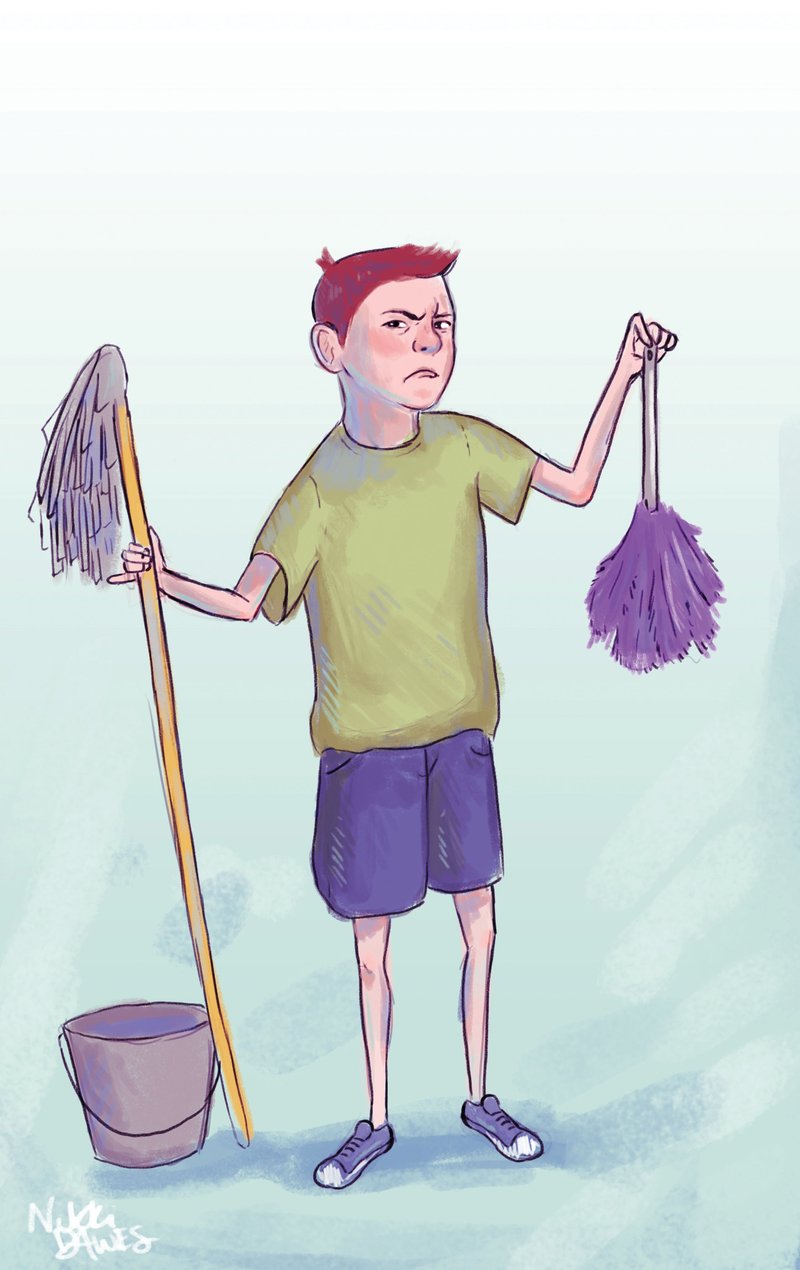 Next time you tell your kids to rake the leaves, do the dishes or clean the bathroom, you can safely add, "It's for your own good."

Marty Rossmann of the University of Mississippi used data collected over 25 years, starting in 1967, to discern whether asking children to help with household chores starting at age 3 or 4 was instrumental in predicting the children's success in their mid-20s. Chores, she determined, instilled in children the importance of contributing to their families and gave them a sense of empathy as adults. Those who had done chores as young children were more likely to be well-adjusted, have better relationships with friends and family and be more successful in their careers.

But despite the benefits, research shows that fewer parents are requiring their children to pitch in. According to a survey by Braun Research in 2014, 82 percent of grown-ups polled said they had regular chores when they were growing up, but only 28 percent reported asking their children to do any. Reasons for not requiring them to do chores included children's increasing participation in school and extracurricular activities and parents' reluctance to heap more responsibility on them.

"One thing ... that parents don't spend enough time on is really being specific about exactly what the chore entails and even demonstrating how to do it and how to do it properly," says Nicholas Long, director of the Center for Effective Parenting at Arkansas Children's Hospital.

"Rather than just saying, 'Well, you need to dust,' you do it with them and show them how to do it and what needs to be done."

"I try to just go back and say, 'OK, next time we clean this let's do it this way' or, 'Next time we clean the bathroom, let's be sure to get around the bottom of the toilet,'" she says. "You try to encourage them. You don't ever want to say, you know, 'This is terrible.' You just want to say, "I appreciate you doing this for me. Let me show you what we can do next time to make sure that it gets cleaned well.'"

While taking the time to teach children their chores can initially take longer, Long says investing the time has a huge payoff.

"As we become more prosperous as a society, we have expected less and less of our children," Long says. "What's happening is that we're sending them off to college and they don't know how to wash their clothes, cook a meal, sometimes even basic things like how to change a lightbulb, because we do everything for our children too often."

ALL IN THE FAMILY

Children are often capable of more than their parents give them credit. Toddlers are eager to please and are ready to show off their big-kid skills. Children as young as 2 years old can be given simple tasks, like helping to make the bed.

"That may be them putting the pillows on their bed or pulling the sheet up under the pillow. They may need some assistance with that," Simon says.

"They can pick up playthings with your supervision. I know that's the hardest thing, to get the 2- to 3-year-olds to pick something up. My daughter is notorious for saying 'I have to go to the bathroom' when it's time for her to pick up her toys. But if you're firm and you say, 'OK, if you want to go do this other thing, you have to do pick up your toys,' they will usually do it."

Long says it's better to have children do jobs that benefit the whole family, like vacuuming the family room, rather than limiting their chores to tidying their bedrooms. Assigning them a task outside of their bedroom eliminates an opportunity for argument from older children, who may insist that they prefer a messy room, he says.

As for the excuse, "I didn't make that mess why do I have to clean it up?," Long suggests explaining -- repeatedly, of course -- that everyone in the family makes messes and that cleaning them up is just what you do. Shrugging off self-indulgence in favor of families taking care of each other, and of each other's messes, is the idea.

"They would help me sort clothes," Simon says. "Now that really helps me. My daughter, who's 7, puts the clean clothes on the hangers for me and starts putting them away."

"Rather than saying, 'It's time to do your chores,' you can say, 'It's time for us to do our chores,'" Long says. "One of the keys is that you can make it fun. ... You can turn on music and you kind of dance some. It needs to be kind of a fun time instead of a punitive time, especially with young kids and kids who are kind of resistant. And over time they will learn to do these things on their own without all that stuff."

"Just start now," Simon says. "Look at what they can do and then encourage them to help you doing certain chores and eventually that would be their way that they can contribute to their family."

Rewards are another option to tempt children to participate in chore time, but opinions vary on the concept of tying an allowance to the completion of chores. While some child behavior experts claim that an allowance helps children gain an understanding of money management, many parents choose not to tie chore completion to money.

Chad Kauffman, president of Junior Achievement of Arkansas, says the earlier young people can start becoming financially literate -- balancing wants and needs and understanding that when money is gone, it's gone -- the better.

"From our perspective, those are things that kids need to know to be ready for life after high school," Kauffman says. "The other part of that is that there are a lot more kids who want a summer job, but can't find one because they are harder and harder to find .... At least having them work around the house for allowance is something ... to show them the value of work."

Kauffman's children don't get an allowance for doing basic household chores, he says, only for special projects.

"There are some minimum expectations -- you know, these are the things you have to do since you live here -- and then if you go beyond, there might be some compensation for that," he says. "That's how we do things in our family."

Whether or not an allowance is given based on chore completion, Simon says one thing is key: Parents should be consistent.

"It can be a struggle and you have to have patience," she says. "I know, I was a kid once, too, and I didn't do everything perfectly and I know I rolled my eyes when my mom would ask me to do something again. It taught me, though, to be responsible and accountable for my actions."