Defensive end eager to go to work for UA 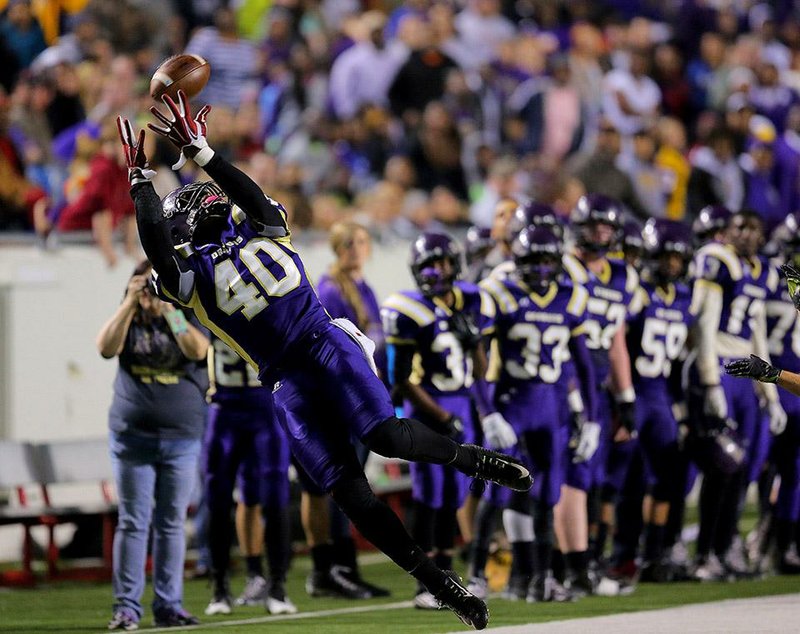 Junction City tight end Jamario Bell makes a catch during the first half of the Class 2A state championship game on Saturday, Dec. 13, 2014, at War Memorial Stadium in Little Rock.

The eighth in a series profiling newcomers on the 2015 Arkansas Razorbacks football roster.

It sits in Union County on the border of Arkansas and Louisiana with a population of fewer than 1,000.

NOTEWORTHY Had 67 tackles and 7 sacks as a senior and caught 3 touchdown passes. … Helped Junction City to a 40-1 record and three Class 2A state champions in his final three seasons. … Cousin of former Arkansas Razorbacks Byran Jones and Alan Turner.

Yet when it comes to producing Football Bowl Subdivision prospects, Junction City is as accomplished as any small school program you'll find in Arkansas.

Now you can add defensive end Jamario Bell to the growing list of major-college prospects who have come out of the ultra-successful Class 2A program.

Former Junction City standouts Alan Turner and Byran Jones enjoyed solid careers for Arkansas after signing with the Razorbacks in 2010, and defensive back Kevin Payne went from Junction City to Louisiana-Monroe and onto the NFL as a member of the Chicago Bears. Jaqwis Dancy, a teammate of Bell's last season, also signed with FBS member Louisiana Tech following last season.

Junction City Coach David Carpenter offered a simple explanation for why the school produces so many prospects.

"There's not a lot to do down here," he said. "The kids play sports. We just try to keep these guys as busy as we can. After awhile, all that just kind of falls in."

Bell's explanation for the school's success isn't any more complicated than Carpenter's.

"Basically, we just work harder than everybody else," he said.

Bell, 6-6, 255 pounds, certainly did his share of work for the Dragons last season. He played defensive end and tight end while leading Junction City's football team to a third consecutive Class 2A state title, helped its basketball team reach the state championship game, then won state titles in the shot put and the discus while helping Junction City finish second in the Class 2A track and field state championship.

It's the same load Bell handled throughout his four years of high school, and Carpenter believes the variety of skills Bell developed while playing different sports gave him an edge over other linemen when it came to his recruitment.

"He just went from one sport to the next and kept going," Carpenter said. "Everybody has their own opinion about it, but here in Junction we want all of our skill guys to go play basketball, then we want them all out there in track."

Bell's football skills drew the most attention from college suitors, due in part to his size and help from his cousins Turner and Jones.

Bell said Jones and Turner, both of whom graduated from Junction City in 2010, served as his coaches when he was in the seventh grade. As he grew older Bell paid close attention to Jones, a defensive tackle, and how he handled himself.

Bell committed to Arkansas in August 2013. He watched as the Razorbacks went through 3-9 and 7-6 seasons, but he said he never lost faith in the Razorbacks and never considered taking another offer even though Auburn, Louisville and Mississippi State kept calling.

"They came after me pretty hard," Bell said. "But, for the most part, they knew I was going to stay with Arkansas."

These days Bell can be found in a place he had little time for previously -- the weight room. Bell didn't participate much in offseason football workouts because he always went straight to basketball following the completion of the football season and then it was off to track and field in the spring.

Now he is in the weight room daily. Bell said he is working on his upper body but that he doesn't have target weight.

"I'm just going to work and wherever I get to is where I'm supposed to be," he said.

Bell will have to figure out his place among a group of defensive ends that lost only Trey Flowers from last season's team. Junior JaMichael Winston started 12 games last year and leads a group that includes Mitchell Loewen, Brandon Lewis, Deatrich Wise and Tevin Beanum.

To crack that rotation, Bell said he'll rely on what worked for him and so many others at Junction City.

"My thought is just to come in and do everything my coaches tell me to do," he said. "I'll work hard in the weight room and see where it goes after that."

Print Headline: For whom Bell toils/Defensive end eager to go to work for UA