Education Board passes switch to ACT 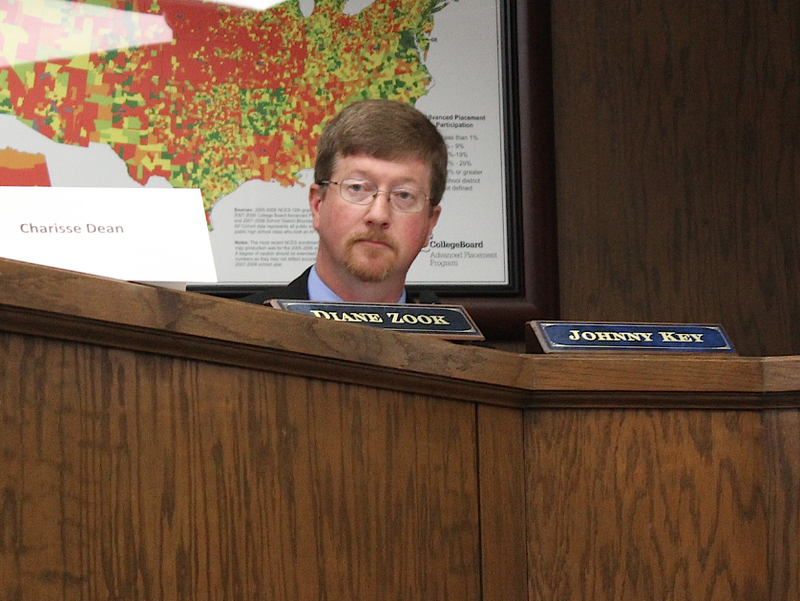 Arkansas Education Commissioner Johnny Key looks on during the Board of Education's discussion on whether to switch to ACT testing for its statewide assessments in the 2015-2016 school year.

The state Board of Education voted Thursday to switch Arkansas' public school testing program to the ACT and ACT Aspire exams, reversing course less than a month after rebuffing Gov. Asa Hutchinson's recommendation that they do so.

But the board that voted 4-2, with two abstentions, on Thursday in favor of the change next school year to ACT from the Partnership for Assessment of Readiness for College and Careers, or PARCC, was a different makeup from the one that decided at a June 11 meeting to stick with PARCC.

Two members' terms expired and a third resigned after taking a position with the Walton Foundation; all three of Hutchinson's new appointments — Charisse Dean, Brett Williamson and Susan Chambers — voted for the ACT switch.

Hutchinson in a statement early Thursday afternoon lauded the board's vote, saying its "willingness to move away from PARCC and seek this new contract is an indication of the Board’s continued dedication to putting Arkansas’s students first"

"The board members were thoughtful and deliberate on this issue and reached a final decision that I think is best for our students and teachers over the long term," he said. "It provides stability and aligns Arkansas with a nationally recognized testing system."

Two members, Jay Barth and Vicki Saviers, abstained from Thursday's vote, with Barth saying he was doing so in protest.

Barth said he sees positive parts of the ACT test, but has "deep concerns" about its reliability and validity. He said sticking with PARCC or something similar pending consideration of other options over the next year seems like the "best option," but it was not said to be on the table.

He called Thursday's vote tougher than the board's January decision to take over the Little Rock School District, saying it's "so frustrating to not have an option on the table that feels like the right thing to do."

Board member Vicki Saviers said she felt "just in a corner," criticizing the process by which the state presented the ACT plan as not giving the board any good alternatives.

"We literally were handed one option and then basically told that if we don't do this option, it will be our fault that we don't have an assessment," she said, noting that the board was also told only the ACT testing would clear the legislative committee that must approve it. "So we're in a tough spot here."

She added later, before abstaining during the roll-call vote: "My heart is clearly against the motion. But my mind is saying what if the motion fails? Then what happens?"

Board member Diane Zook said the state should stick with PARCC for the next school year while spending the next year investigating other potentially better options. She said she didn't favor one test over another, but voted against the ACT switch.

"To hurry to do something now would not serve the students or the parents or the patrons or the educators well, nor would it give good guidance and appreciation to those people who spent five years coming to the point we are," she said.

Dean — who made the motion to make the switch — said the timing made the ACT the clear best choice, adding that she's been keeping up with the issue even as a new board member who immediately had to consider what Education Commissioner Johnny Key called "one of the weightiest issues that's going to come before this body for quite some time."

Key opened the discussion with a review of the benefits to the ACT switch, suggesting it would result in better methodology and prepares students from a young age for the ACT college readiness test.

Debbie Jones, assistant commissioner for learning services for the state Department of Education, also spoke to the board, saying the ACT option provides better preparation in science, technology, engineering and math.

The board on Thursday also heard from four members of the public — three in favor of the ACT switch and one who requested they stick with PARCC. Among the ACT advocates was one familiar face: Alice Mahoney, a former board member whose term expired at the last meeting, when she was the lone vote in favor of switching to ACT.

Hutchinson a day before that June meeting praised the recommendation from the Governor's Council on Common Core Review that Arkansas offer the ACT tests rather than the PARCC ones, which generated some criticism when they debuted this past school year.

The board, however, voted 7-1 at the June meeting not to make the switch with one member, Vicki Saviers, saying the push to make the change "feels a little political" and other members noting strong opposition.

Hutchinson less than two weeks later noted that he had the authority not to continue PARCC testing and directed the state not to continue it. That left the state's assessment program, which is required to receive federal education money, in limbo. 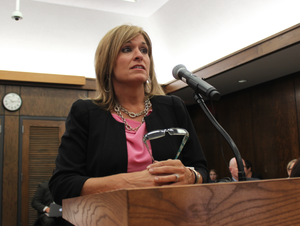 Photo by Gavin Lesnick
Debbie Jones, assistant commissioner for learning services for the state Department of Education, speaks Thursday to the state Board of Education.
ADVERTISEMENT