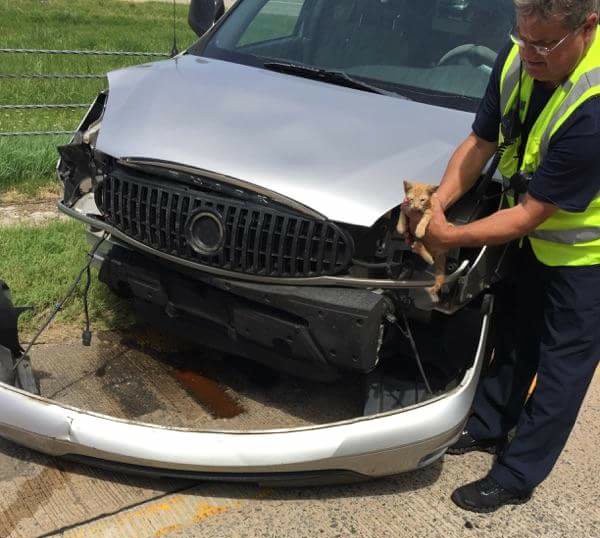 An emergency responder holds a kitten that survived a crash on a Little Rock highway while hiding in the car's engine compartment.

A stray kitten has a fitting name, a new home and some experience working at an ambulance dispatch center after sneaking into a car's engine compartment and then surviving a collision on a Little Rock freeway.

The small, orange tabby had somehow nestled her way into the engine of a vehicle that on Thursday morning crashed at Interstates 430 and 30 in southwest Little Rock. Crews on the scene were caring for the injured driver when they heard a noise coming from the compartment and opened it to find a perfectly friendly, entirely uninjured feline.

The driver, who didn't recognize the small stray and hadn't any idea how it got into the engine "immediately fell in love with this cat," named it Hallelujah, or Halle for short, on the spot and asked if she could keep it, said Greg Thompson, operations director for Metropolitan Emergency Medical Services, or MEMS.

There was just one problem: The woman had suffered injuries in the wreck that required transporting her to the hospital, where the cat couldn't go. So the MEMS workers volunteered to keep the cat at the ambulance service's Little Rock headquarters until she was well enough to come pick it up.

"And it became the mascot for the day," laughed Thompson. "It was fed and watered and oohed and aahed over. It even got its own MEMS bow and a trauma band."

Those orange plastic trauma bands are issued to all patients so medics can keep track of their information as they offer treatment. For Hallelujah, the band served as a makeshift collar and recognition that "it'd been through trauma," Thompson said.

MEMS scheduling manager, Capt. Steffani Anderson, who describes herself as the organization's "go-to animal person," was one of the employees tasked with keeping tabs on the tabby, whom she called the "sweetest little cat you've ever seen."

Some MEMS workers went out and bought wet and dry cat food and a few toys while Anderson took the cat on a tour of the dispatch center or let it hang out on her desk for a time. The kitten, whom Anderson estimated to be about 10 weeks old, even pounced on her keyboard at one point as Anderson was sending a page to all the ambulances in the field, dispatching the message a little early with some random characters.

"It was much more fun than what I would be doing on a usual day," Anderson said, adding that she swelled with pride knowing the MEMs and Little Rock Fire Department crews at the scene offered such care for a cat.

"These are the stories that have happy endings," she said. "That's what they need to keep their morale up."

By the end of the day, the driver had been released from the hospital. Her daughter drove her to the MEMS office and the kitten was brought out to the car, where the woman was "very excited and happy" to be reunited hours later with her new pet.

Thompson called it a "good little cat" who surprisingly showed no ill effects from the collision.

"I guess it has nerves of steel," he said. "Somebody said maybe it's only got eight lives left." 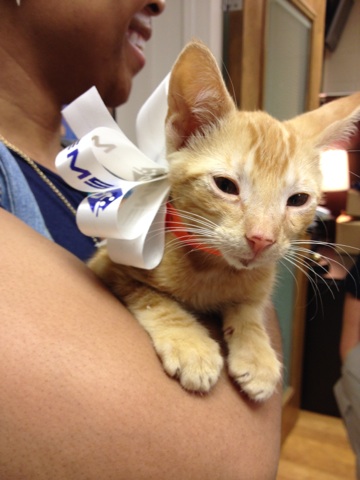